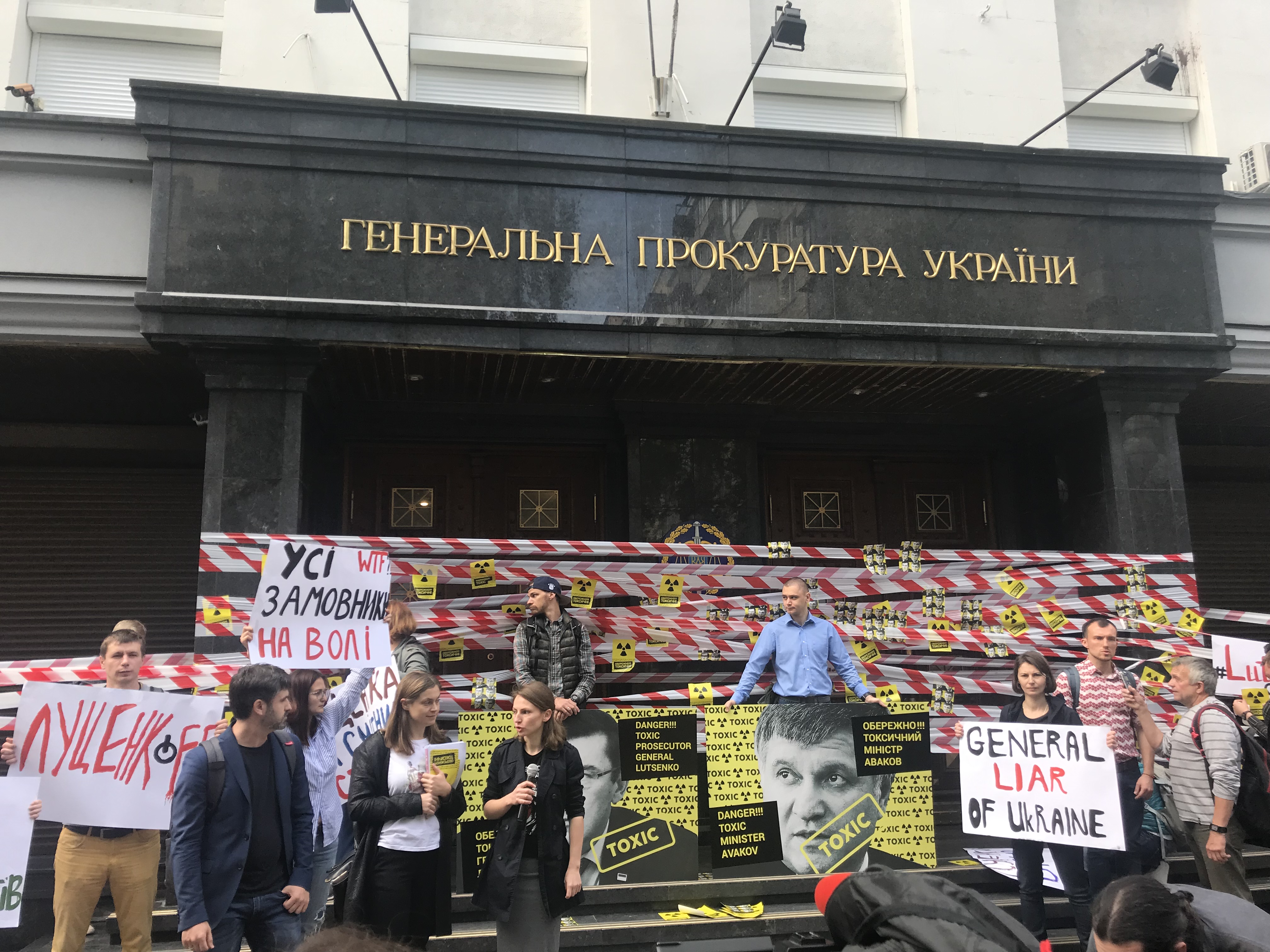 The initiative group of civic organizations filed appeals regarding the inclusion of the Prosecutor General Yuriy Lutsenko and the Minister of Internal Affairs Arsen Avakov into the Global Magnitsky Act. The inclusion into the act foresees the introduction of personal sanctions in the United States.

The Global Magnitsky Act is the US law that allows to block assets and impose visa ban on to the United States on people who have committed human rights offenses or are involved in corruption schemes.

20 civil society organizations* believe that the Prosecutor General Yuriy Lutsenko and the Minister of Internal Affairs Arsen Avakov should be included into the act due to gross violations of human rights, sabotage of reforms, corruption and obstruction of justice.

In addition to sanctions in the West, activists demand to dismiss Lutsenko and Avakov, as well as not to allow them to hold such positions in future.

These politicians became toxic due to their activities, and, thus, they should be dismissed from the office and bear responsibility.

Today, activists came to the building of the Prosecutor General’s Office and the Ministry of Internal Affairs precisely with such demands. They put tapes around buildings where Lutsenko and Avakov work and installed signs “Beware. Toxic” and “Danger. Toxic”.

Holding positions by Lutsenko and Avakov is dangerous for Ukraine. It has already made a lot of harm. Because of this, both should be punished by dismissal and designating them to the sanction list.

WHY LUTSENKO AND AVAKOV SHOULD LEAVE AND BE UNDER SANCTIONS?

The Prosecutor General Lutsenko and the Minister of Internal Affairs Avakov are politically responsible for the failure of the prosecutor’s and police’s reforms.

Lutsenko and Avakov monopolized the power of law enforcement agencies and took control over the old corrupt system while hiding behind “reforms”.

Police and prosecution  instead of fighting corruption, led it. And instead of arresting criminal authorities, they became their best friends.

Attacks and murders of activists and journalists

The only ones who oppose the organized crime and corruption are activists and journalists. As the result, they become targets for persecution and attacks.

Since 2017, more than 55 attacks on activists and journalists have been committed in Ukraine. Four of them are murders of Kateryna Handzyuk, Iryna Nozdrovska, Mykola Bychko and Vitaliy Oleshko.

The investigation of these murders and attacks is sabotaged by the Prosecutor’s Office and the police in any possible way. Instigators are not punished in any case. Part of cases were closed due to the expiration of terms of the investigation.

At the end of April 2019, the Prosecutor General’s Office softened the article of indictment to Vladyslav Manger, who is now prosecuted not for the contract murder, but for the organization of causing severe bodily injuries to Kateryna Handzyuk. We should remind that Katya was poured with one liter (!) of sulfuric acid.

At the same time, the National Police initially sabotaged the investigation in the case of Handzyuk. They tried to pin everything on the innocent person with strong alibi and “feed” the society with this lie. If it were not work of journalists, he would still be in prison for the not committed  crime.

Yuriy Lutsenko and Arsen Avakov are politically responsible for attacks and silent coverage of instigators.

Corruption and obstruction of justice

Moreover, the son of Arsen Avakov Oleksandr and the deputy Serhiy Chebotar organized the corruption scheme regarding stealing of 14 million UAH on backpacks for the needs of the Anti-Terrorist Operation in the East of Ukraine. No one bore the real responsibility in the “case of backpacks”.

Today, Avakov through his department and in conspiracy with prosecutors fabricated the criminal proceeding against the expert Nadiya Bugrova and put pressure regarding her professional activities. Bugrova conducted the forensic expertize and confirmed causing losses in the amount of 14 million UAH in the case of backpacks.

The Prosecutor General Lutsenko in his turn covers his deputy, the head of the Specialized Anti-Corruption Prosecutor’s Office Nazar Kholodnytskyi, who masterminded the decision to close the case of backpacks.

The PGO did not see any violations in closure of the proceeding regarding Kholodnytskyi himself in the “aquarium case” by the investigator of the Main Department of the SBU, where evidence of interference into the investigation into the NABU’s cases by Nazar Kholodnytskyi was found.

Dumping of Yanukovych’s and his associates cases

Yuriy Lutsenko has also helped former President Viktor Yanukovych and his associates to come out with clean hands. It was the Prosecutor General’s Office who helped them to save their assets and avoid the responsibility.

Andriy and Serhiy Klyuev, Yuriy Ivanyushchenko, Olena Lukash were excluded from the EU sanction list when Lutsenko was the Prosecutor General.

Neither Yanukovych nor his associates have been prosecuted yet for the corruption crimes, although Yuriy Lutsenko took the position of the Prosecutor General with the promise to punish perpetrators.

In fall 2016, Yuriy Lutsenko closed the criminal proceeding against Mykola Zlochevskyi, who was suspected of illicit enrichment and money laundering.

The widely publicized special confiscation of the case, which was investigated by the notorious prosecutor Kostyantyn Kulyk, was made on the ground of very dubious secrecy decision. It is very likely that these funds will subsequently have to be refunded on the ground of the decision of the European Court.

There is no investigation of Maydan’s case

During the entire period of his leadership, Yuriy Lutsenko did not facilitate but instead sabotaged the investigation of Maydan cases.

The Department of Special Investigations, which is investigating these cases, families of the Heavenly Hundred and their attorneys have repeatedly stated about interferences of the Prosecutor General.

Cases, where Lutsenko had interest, were  simply taken away from the uncontrollable prosecutors and closed. In particular, this regards cases of Klymenko, Ivanyushchenko, Zlochevskyi, Kaletnik, Tabachnyk, cases concerning the appropriation of Mezhyhirya, Sukholuchya and Boiko’s Towers.

Olena Lukash completely abandoned the responsibility thanks to Lutsenko. The case regarding the son of former Prosecutor General Viktor Pshonka Artem was almost closed.

Lutsenko personally took care of closing the criminal proceeding against the head of the Court of Appeal of Cherkasy region Volodymyr Babenko, involved in the issuance of dozens of illegal decisions against Maydan participants.

THE LIST OF ORGANIZATIONS WHICH SUPPORTED APPEALS TO THE U.S. DEPARTMENT OF THE TREASURY REGARDING THE IMPOSITION OF PERSONAL SANCTIONS ON LUTSENKO AND AVAKOV