If SAPO opens many new loud cases now, accelerates those which were slowed down, and at the same time dumps suspicions against Privat, that would mean that Kolomoiskyi indeed considers Zelenskyi as his own puppet.

In January, the presidential candidate Volodymyr Zelenskyi supported the anti-corruption agenda of the number of NGOs. One of its points was the dismissal of SAPO head Nazar Kholodnytskyi and his deputies.

But since that time this point is not publicly mentioned by Zelenskyi’s team. And there is abstract promise to create anti-corruption bodies once through some international selection panels in the program announced in April by campaign headquarters instead of specific steps regarding the SAPO. 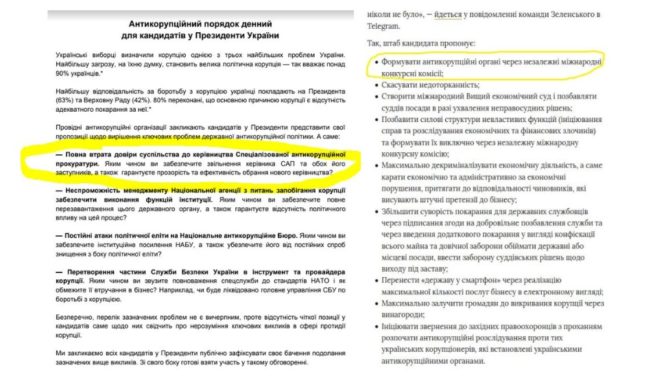 We cannot state that Zelenskyi’s campaign headquarters abstracted from the “problem of Kholodnytskyi” due to the position of Andriy Bogdan. At the same time, he is (a) the personal attorney of Igor Kolomoiskyi; (b) the representative of Zelenskyi’s campaign headquarters, who visited not only NABU head Artem Sytnyk before elections, (c) and whom the main political technologist of Zelenskyi Dmytro Razumkov calls the “self-sufficient person” and conducts the reconstruction of Zelenskyi’s image from Kolomoiskyi’s logos.

Anyway, on April 8, Ruslan Ryaboshapka in his interview stated that everything is complicated with Kholodnytskyi’s dismissal:

“To change the specialized prosecutor, as the majority of civil society sector and our foreign partners state today, is rather complicated. This requires changes to the Law. There is no time now. If there is possibility after all, if the specialized prosecutor Nazar Kholodnytskyi, it seems to me yesterday stated that he would work and he would give the result. If this is really possible and if it is possible to establish cooperation between the leadership of SAPO and NABU, it would be great. In order to start working for the country immediately,” said Ryaboshapka.

It is not surprising that on April 10 Kholodnytskyi stated to journalists that he will not retire if Zelenskyi is the President. He also reminded that nobody could dismiss him until the end of 5-year mandate from the date of his appointment in November 2015.

In fact, it is still unknown what degree of subjectivity of Zelenskyi in his relationship with oligarch Igor Kolomoiskyi is. And here we would like to draw your attention to Kolomoiskyi-Kholodnytskyi relationships. Nashi Groshi has grounds to believe that the oligarch and SAPO head have absolutely working relations.

The fact is that SAPO has the number of cases against Kolomoiskyi:

These cases are contextually important in conjunction with the personal meeting of Kolomoiskyi with Kholodnytskyi in April 2016. After it SAPO head demanded from the PGO the case regarding giving the bribe in the amount of 110 million USD by Kolomoiskyi at request of the then President Leonid Kuchma through his son-in-law Viktor Pinchuk for the right to operate Ukrnafta. After the Maydan Kolomoiskyi gave loud announcements to the Parliamentary Commission regarding this case. The Prosecutor General’s Office opened the case and didn’t investigate it. And it would have collected the dust if SAPO had not resumed the investigation. Novoe Vremya sources stated that this case gave Kolomoiskyi “additional trump cards in London International Court” in the case between Ukrnafta and Naftogaz. But Kolomoiskyi lost in London in 2018. And the need for additional trump cards, apparently, disappeared. Kholodnytskyi’s deputy Volodymyr Kryvenko closed the case, where Kolomoiskyi was the briber.

Another important thing is that, according to Nashi Groshi sources, in 2018, during the most difficult period when Kholodnytskyi due to the “aquarium” scandal was threatened with the dismissal and the criminal proceeding, it was Kolomoiskyi and Avakov who helped SAPO head to avoid this.

So, on the one hand, the situation with Privat cases will be very revealing. In particular, we will see the warmth of relations between Kholodnytskyi and Kolomoiskyi by the fact whether they will be buried or reanimated. On the other hand, we can assume that Kholodnytskyi’s activity may serve as the marker regarding intentions of Kolomoiskyi toward Zelenskyi.

This is about “attacking” cases by which SAPO can “immediately start to deliver the result” in order to create the anti-corruption image for the new President of Ukraine. For instance, the promotion of the case “P approved” regarding theft at state oblenergos by Kryuchkov and Kononenko with Surkis brothers, or sacrifice of Dubnevych brothers from Petro Poroshenko Bloc would create the impression that Zelenskyi became the President and the ice has begun to break, bandits are in prisons.

The case Rotterdam plus may become even more louder. Kholodnytskyi could have closed it in the midst of friendship between Poroshenko and Akhmetov. But he did not do it. And now it can become great tool for catching Petro Poroshenko after his loss in elections.

The fact is that one of the most important aspects of the case is recognition who made profit on DTEK’s eurobonds, which during the announcement of de-oligarchy by Poroshenko in 2015 were cheaply bought by the investment company ICU. Their price immediately rose when Rotterdam plus formula was implemented. NABU detectives have already made a long way to offshores. And, at the goodwill of foreign financial institutions, they could easily find out whether guesses are right. Namely, if ICU serves financial affairs of Poroshenko, if the co-owner of ICU Demchyshyn conducted de-oligarchy in the energy sector, if the employee of ICU and Roshen Vovk implemented Rotterdam plus, then the beneficiary might be someone from Poroshenko’s surroundings, and probably he himself.

The fact is that Zelenskyi will not actually receive any powerful authority after the victory on elections, since the appointment of the Prosecutor General and the head of the SBU takes place with the participation of the Verkhovna Rada. This means that own faction in the Parliament is needed for the fullness of the functional. The bigger the presidential faction is, the stronger the President will be in the coalition talks. And the faction is possible only after results of new elections, which should take place only in October (if there are no early elections, but this is much more complicated story). So, the President will need to maintain his rating without the authority. And the best would be quick announcements of suspicions and putting corrupt officials in jail, whose cases are pending in courts, in SAPO and NABU.

Nashi Groshi sources state that relationships between Kolomoiskyi and Zelenskyi are no longer cloudless. ZeTeam allegedly does not want to have any relationship with “fixers” and contracts made by candidate’s staff associated with Kolomoiskyi and Portnov. Thus, it is possible to assume that in order to harness the dark horse Kolomoiskyi (a) will not give him positive context through Kholodnytskyi (b) will withdraw Kvartal’s access from 1+1.

We will continue to watch. Although, to leave Kholodnytskyi and his deputies for any period longer than necessary to obtain the arm of governance means to take over his old things. This is profitable only for the master of puppets and his puppets.