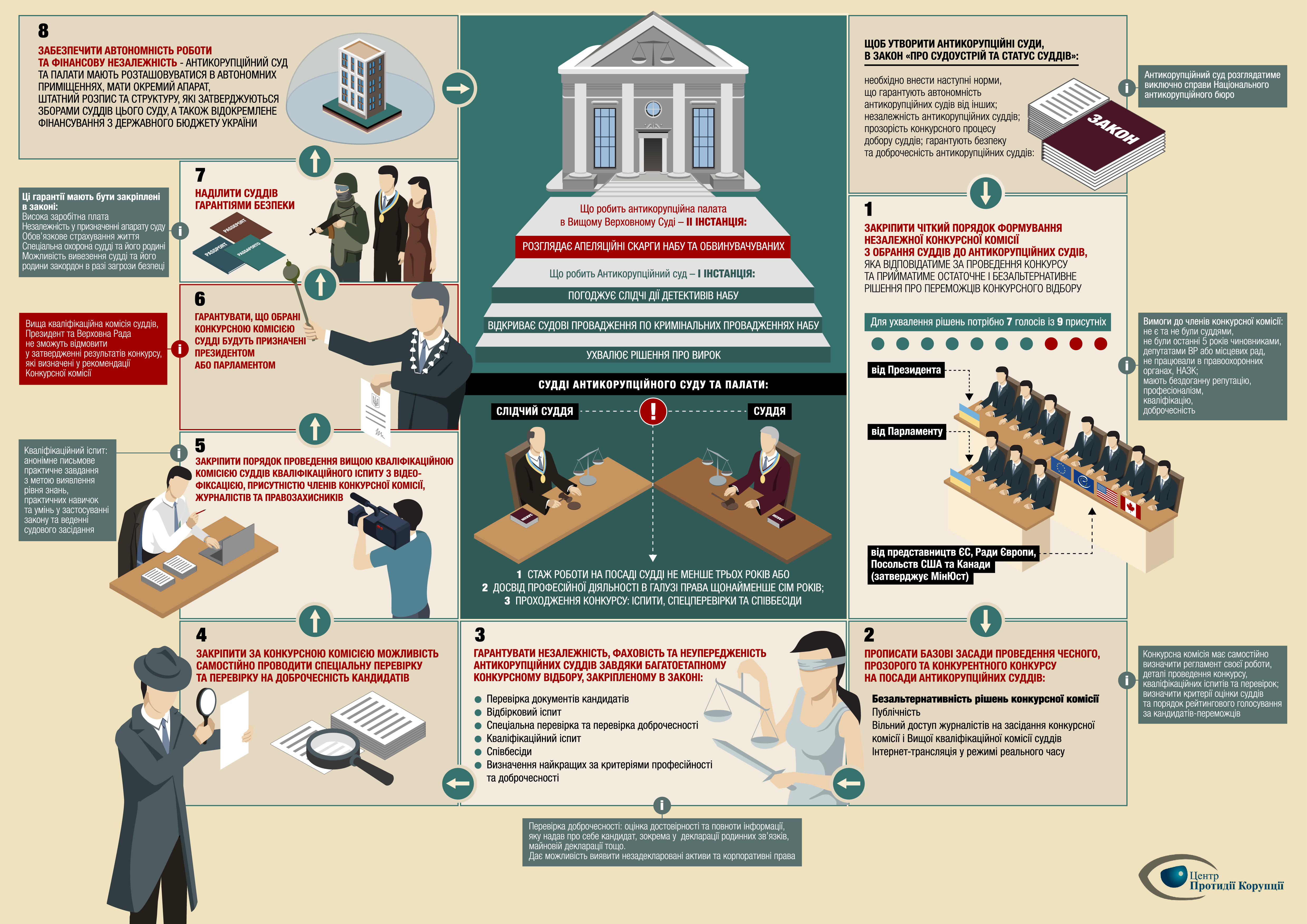 Is it NABU which should be held responsible for the poor results in breaking the impunity over corruption?

The National Anti-corruption Bureau of Ukraine has entered its second year of operation, but has brought next to zero convictions and has recovered zero UAH worth of assets. Both politicians and the public are starting to question NABU’s ability to combat grand corruption in Ukraine. But, is it NABU which should be held responsible for the poor results in breaking the impunity over corruption?

As of June 2016, NABU has opened 148 criminal cases on crimes of corruption, issued 35 notifications of suspicion and arrested 220 million UAH worth of monetary assets. NABU filed its first cases to court in March 2016. Thus far 15 cases have been filed to courts. This are results NABU achieved since mid December 2015, when Specialized Anti-corruption Prosecutor was selected and NABU detectives received right to conduct investigations.

However, the courts haven’t managed to schedule even one trial of NABU’s cases. To give just one example, in March-June 2016, Poltava’s courts passed one of NABU’s case against a judge (who was caught receiving a bribe) back and forth three times without scheduling a hearing.

The courts are using all opportunities to block NABU’s investigations. According to the Criminal Procedure Code of Ukraine, NABU is legally required to receive court approval for a number of investigative activities to collect evidence (such as access to private property, raids, assets seizure, access to bank records and accounts, private correspondence and covert activities such as wiretapping). This  gives the courts a powerful role even on the stage of pretrial investigation. In April 2016, classified information regarding the investigative activities of NABU against judges was leaked from Kyiv’s district courts, which resulted in fruitless raids. In May 2016, the Solomianskiy district court of Kyiv refused to give NABU permission to access  information from the telephone of the assistant to Mr. Granovsky, a close ally of the President, which was needed for the investigation of one of NABU’s criminal cases.

When there is no possibility to block NABU through court, the court itself is being blocked. Recently a fire happened in Solomianskiy district court, which by coincidence, considers NABUs requests for investigative activities; by the same coincidence, the fire destroyed the exact part of the court that deals with NABUs cases. Moreover, the fire happened after the Special Anti-corruption Prosecution filed, to this very court, 8 indictments against judges.  It is yet unknown how many of NABU’s documents were destroyed and how soon the court will return to fully-functioning status.

Therefore, both effective investigation and proper punishment for corruption depends on the courts. However, Ukrainian courts are too deeply rooted in the old corrupt system and are blocking the efforts of NABU and SAP.

The proper prosecution of cases of grand corruption is not possible while old courts are involved.

The solution for Ukraine is to create specialized anti-corruption courts with administrative autonomy and guarantees against political interference.

This solution is not new. Those developing countries that managed to combat grand corruption had not only a special investigative body, but also a special court for the consideration of such cases. Such a court was established either ad hoc as a panel of specially selected judges (Peru) or as a special institution (Croatia, Indonesia), sometimes with the involvement of foreigners (Guatemala). On the other hand, in countries where special investigative bodies did not bring about dismissals and convictions of those engaged in grand corruption did not have special courts.

One may argue that developed countries don’t have specialized courts for crimes of corruption. However, what these countries do have is a long tradition of judicial independence for all types of courts. In developing countries, on the contrary, the tradition is that of establishing political control over all levels of both prosecution and the judicial system.

International organizations acknowledged that developing countries need independent investigative bodies to work with crimes of corruption, because the old bodies were too corrupt or controlled by those who should become subject to investigations. It is now time to acknowledge that fair and just trials in cases of grand corruption for developing countries is possible only after special courts with guarantees against political interference are created.

On June 2nd, 2016 Ukraine finally launched judicial reform by adopting amendments to the Constitution and creating a new law for the judicial system. Why do we need a special anti-corruption court if judicial reform ensures that all judges are independent and professional?

Firstly, the new procedure for selection of judges is still open for political interference. Selections will be made by the same bodies that in 2014-2016, secured positions for judges with unjustified assets and judges who made unlawful decisions against participants of the revolution of dignity. A possible outcome of such selections may be the substitution of judges of Yanukovych with equally dependent judges of Poroshenko. Even if we choose to trust the reselection of judges, the process of reselection will take at least 2-3 years. Ukraine cannot afford to wait another 2-3 years with public resources being abused and those engaged in grand corruption not being prosecuted. Moreover, the public demands NABU to deliver results immediately. Should NABU not show tangible results soon, politicians may question the very existence of NABU. In the end, we may not have independent investigations by the time that judges of questionable independence are selected.

Model of Anti-Corruption Court for Ukraine

The best solution would be to create a Supreme Anti-corruption Court  as the first instance court and an independent appeal court within the Supreme Court of Ukraine.

The new law on the judicial system already states that a supreme anti-corruption court should be created. However, the actual creation of such a court is suspended until another special law defines the requirements for anti-corruption judges. Since no deadline for such a law has been established, the law may never happen and an anti-corruption court may never be launched. The new law does not provide for a special anti-corruption appeals court. This court would bring appeals in cases of grand corruption to regular judges of the Supreme Court, who may remain subject to political interference.

Anti-corruption judges should be selected through a special procedure by an independent trustworthy body; a selection commission that is free from political interference.

The President and the Parliament shall delegate three members of the commission each. Three more members could be foreigners and should be recommended by foreign partners of Ukraine, for example, the delegation of the European Commission, the US Embassy in Ukraine and the Embassy of Canada in Ukraine.

The Commission should be legitimized after 7 of its members are appointed and shall need 7 voices for each of its decisions. This will guarantee that the members recommended by foreign partners shall have vetoing voices within the commission. People with or without previous experience as a judge are eligible to apply for the position of an anti-corruption judge.

The commission shall have powers to assess the examination of the qualifications of candidates for the anti-corruption judge position, hold righteous scrutiny of candidates (with information received from NABU) and make final decisions on the selection of judges. The decisions of the selection commission must be binding and mandatory for the Supreme Council of Justice who will submit these nominations to the President.

Anti-corruption courts must have guarantees of administrative independence.

The anti-corruption courts must have separate staff, a separate budget and full capacity to make decisions over their budgets. These courts must also reside in separate buildings.

Anti-corruption judges should have special security guarantees, such as  24/7 guards for a judge and his family members as well as for his residence, the freedom to move and live abroad in the case that a judge or his family members are under serious physical threat.

Only with the creation of special anti-corruption courts with these guarantees will NABU and SAP be able to deliver convictions of senior corrupt officials and confiscation of their ill-gotten assets.

Updated version of the op-ed, first published in Kyiv Post