On the 25th anniversary of Independence Day parade, Ukrainians saw a new army, according to Petro Poroshenko. The military equipment for which was purchased or restored at the expense of taxpayers.

“Our desires and needs do not always coincide with our capabilities.

We will need years and tens of millions of hryvnia to sleep safely.”, said the President at that time.

Nowadays, considering recent events, presidential words about strengthening the county’s defense capacity could be understood in two ways. Because after several corruption scandals in army procurements and series of staff changes the question arises: who exactly the President was talking about when he was using words “we” and “our”: Ukrainians or his business partners in government.

In November 2016 Poroshenko’s team finished appointments of “appropriate” staff for the positions in the defense and industrial sector. Representative of a friendly political force “Narodny Front” lost his position at the same time.

A kind of status-quo existed in the defense industry until recently. The spheres of influence were divided between the Secretary of the National Security and Defence Council (NSDC) Oleksandr Turchynov and Petro Poroshenko.

Those three needed insiders in the Ministry of Economic Development and Trade. But they failed to move such staff agenda when Aivaras Abromavicius was in office. Everything changed when the Presidential Representative in the Parliament of Ukraine Stepan Kubiv became the Minister.

The Cabinet of Ministers appointed Yuriy Brovhenko as his deputy in June. This news was released in the media with a title “Kliuev’s henchman has become the Deputy Minister of Economy”

Brovchenko used to work in the ministry with current president.

According to “Ukrainska Pravda” sources in the Ministry of Economic Developemenr and Trade, Brovchenko’s activities are mostly governed not by his immediate superior but by Hladkovkyi’s directions.

The scandalous dismissal of the Head of the Department of Defense and Security Viktor Plakhuta form the Ministry of Economic Development and Trade happened in October. He was one of the officials, representatives of Abromavicius team. Plakhuta stated about corruption and pressure from the lobbyists of “Ukoboronprom” and pointed to Brovchenko in the interview to “Hromadske”. Sources of “Ekonomichna Pravda” informed that the new Head of the Department is going to be appointed without open and transparent competition.

An easy scheme was returned for this purpose. Kubiv has gotten a counsellor Andrii Tyvonchuk. He was working in the Ministry for more than 10 years – until May 2015, after that – in one of “Ukroboronprom” companies and finally returned to the Ministry once again.

To avoid the open competition in the Minisry, Tyvonchuk was announced as the winner of another closed competition in the National Security and Defense Council for the position of the Head of the Division of Defense and Industrial Complex, which prepares the materials for Hladkovkyi.

After heading this division for one week Tyvonchuk was transferred to the Ministry of Economic Development and trade for the position of the Head of the Department. 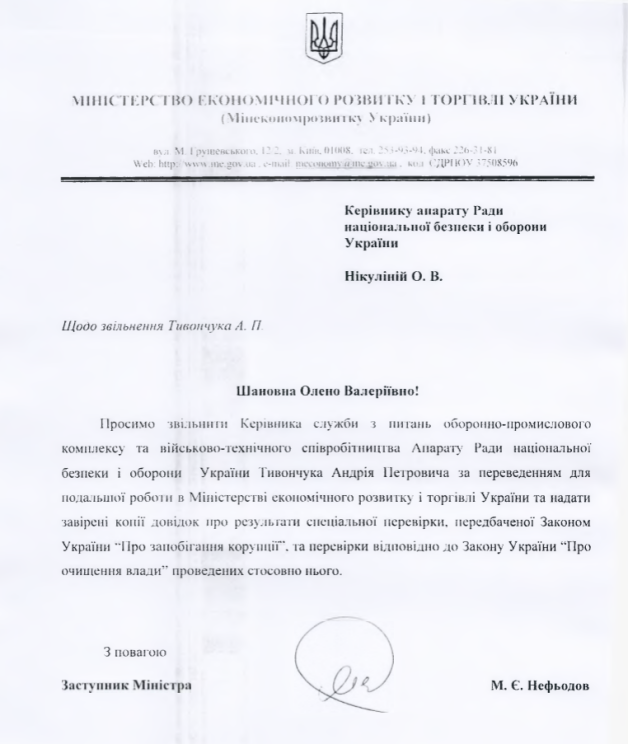 We would like to ask for a dismissal of the Head of the Division of Defense and Industrial Complex and Military and Technical Cooperation of the National Security and Defense Council Tyvonchuk Andrii Petrovych in order to relocate him for further work to the Ministry of Economic Development and Trade and provide certified copies of references on the results of special audit prescribed by the Law of Ukraine “On Corruption Prevention” and the audit according to the Law of Ukraine “On Government Cleansing (Lustration)” carried out in regard to him.

Why this department is so important?

Because it deals with the “defense” documentation for billions of hryvnias. It is responsible for the coordination of the state defense order, allocation of funds from the budget contingency fund, reform and development of the country’s defense industry.

The State Regulation of Defense Procurements 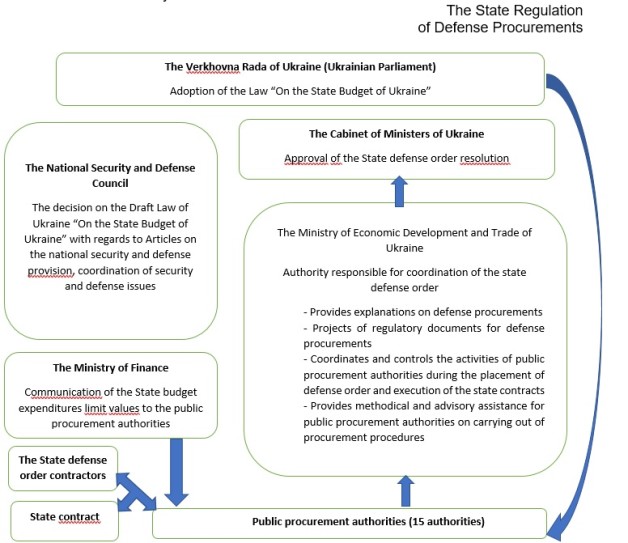 Explanation to the scheme and the role of the Ministry of Economic Development:

The Parliament approves annual State Budget. Separate budget is approved for each central executive authority. For example, 60 billion UAH for the Ministry of Defense. This budget is divided for all needs like salaries, apartments, procurement of clothes and military equipment. Procurement of military equipment is carried out via the State defense order (SDO) which is classified. The proposals to the SDO are submitted to the Ministry of Economic Development and Trade, which prepares them for approval by the Cabinet of Ministers of Ukraine. The CDO draft is considered by the National Security and Defense Council prior to Government approval. The CDO is being executed after the Cabinet of Ministers approval.

According to “Ukroboronprom” the current year’s CDO amounts to 13,5 billion UAH.

The accuracy of verifying CDO documentation depends on who is heading the Department of Ministry of Economic Development and Trade. An official with strong beliefes can stop a dubious document, the dependent one will execute the direction of his supervisors to provide “green light”.

The Ministry of Economic Development and Trade maintains the register of defense products producers i.e., the register of CDO executors. The Ministry employees decide whether company will be included in the register. Last staff changes aimed at gaining control over the whole chain of defense orders by partners of Poroshenko and Hladkovskyi. Did they place their people for more effective work of the system? The answer could be found in the approach to the State Program of Defense and Industrial Complex (DIC) development-2020.

The total amount may be more than 60 billion UAH for 4 years. These funds will be managed by the Ministry of Economic Development and Trade and the Program development is well under way now, under formal control of Brovchenko.

But the thing is that consideration of the Strategy of the defense and industrial sector development should have been prior to the Program.

We do not have any Strategy of the defense and industrial sector development, says Viktor Plakhuta. Long-term documents should be adopted at first in order to confirm vision of the country development. But nobody needs this because the Strategy has no funds, unlike the Program. 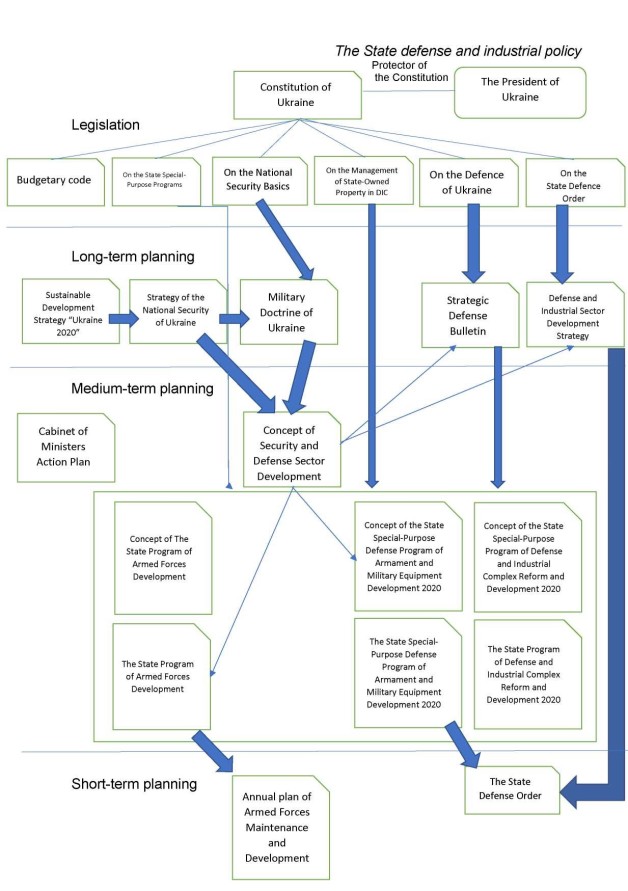 “Ukroboronprom” was trying to lobby its version of the Program. “Ukrainska Pravda” has the draft of this secret document according to which the projected volumes of financial resources are determined at the level of 171,2 billion UAH 65,5 of them are the state budget funds. On November 23 after the meeting of the Parliamentary Committee on the National Security and Defense the Head of “Ukroboronprom” Roman Romanov in a conversation with UP denied that the draft program of “Ukroboronprom” includes the amount of 170 billion:

According to experts, interviewed by the UP journalist, up to 30% of funds allocated for the Program could be “used ineffectively”, which actually means that they could be stolen. And one of the main reasons for this is document’s classification level, it is accessible only for people of Poroshenko-Hladkovskyi team.

However, MPs of the relevant parliamentary Committee also have questions.

One of the members of this Committee from “Narodnyi Front” party told UP that he saw some unreal plans in the Program like construction of a new helicopter. So, parliamentarians insist that the Program could be approved only after its consideration on the Committee. But it is controlled by Pashynskyi.

It is worth mentioning a few more people involved in the national security and defense sector.

The full Supervisory board of “Ukroboronprom” consists of 5 persons. Three of them are appointed by the president and two others – by the Cabinet of Ministers. Presidential quota was filled in March 2014 by Oleksandr Turchynov.

Pashynkyi was accused of two things. First one is the conflict of interests.

Pashynskyi replied on allegations of abuse in the activities of “Ukroboronprom” on November 23, during the Committee meeting:

Because it is headed by Poroshenko-Hladkovkyi henchman – Roman Romanov.

Physicist-teacher who was a dealer of “Bohdan” corporation in Kherson Region before his appointment to “Ukroboronprom” and headed Poroshenko’s election team during the Presidential campaign in the same region. 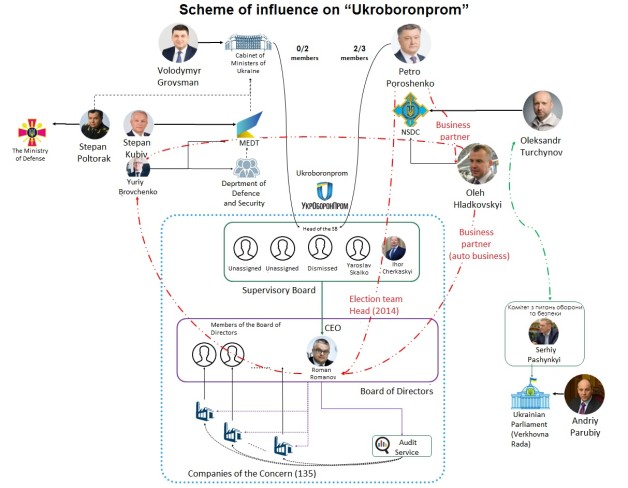 “Ukrainska Pravda” appealed to all persons mentioned in this material for comments.

Only the Head of “Ukroboronprom” replied for now. He promised to answer all the questions in detail after returning from business trip. “Ukrainska Pravda” continues the investigations on the activities of structures connected with the State defense orders and the of Defense and Industrial Complex Reform Program.