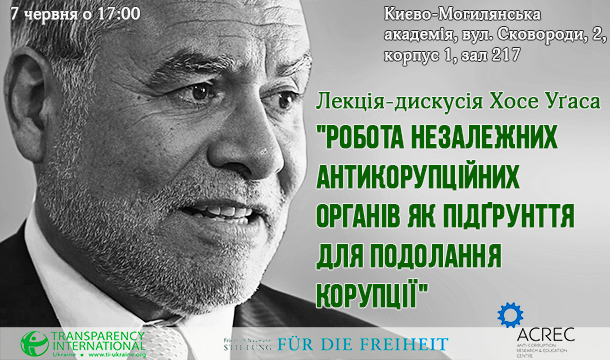 Ukrainian visit of Transparency International Chairman of the Board José Ugaz, one of the world’s leading anticorruption leaders has to make the effect of a cold shower for Ukrainian law enforcement officers who still have not shown results of investigation of corruption crimes committed by the former President of Ukraine Viktor Yanukovych and his cronies.

“Ukrainian society waits for the punishment of the culprits. Our international partners, such as the European Union, the USA, Switzerland, Canada, and other leading countries, imposed sanctions on the assets of Yanukovych and his allies. We are already halfway through 2016 and Ukrainian Law Enforcement has failed to convict a single organizer or high-ranking official of the past regime and not a single dollar has been returned to the State.” – said in the open statement of the Heads of Ukrainian anti-corruption organizations: Transparency International, Anti-corruption Action Centre and  Lawyers for the Heavenly Hundred, released on the eve of the visit of José Ugaz who will meet with top officials of the State and heads of Law Enforcement agencies.

“We call on the Ukrainian authorities to follow to his recommendations and implement his advice.”,  – activists urge,  – “Law Enforcement has been incredibly passive acting more like a spectator.  As a result, the only criminal proceedings that have been opened are a direct result of the proactive work of civil society and investigative journalists. The actions of the former President and his allies need one more detailed examination and analysis with a view to new corrupt and economic criminal offences. The current investigations must be sent over to the court as soon as possible.”

In their Statement anti-corruption activists stressed that the lack of punishment for Yanukovych regime representatives and for Yanukovych himself “undermines confidence in the rule of law at the initial stage of formation of the new anti-corruption authorities” and declared their intention to carefully monitor the progress of investigations against the former president and his entourage: V.Yanukovych, O.  Yanukovych , Y. Boiko, O. Klymenko, V. Zakharchenko., S. Arbuzov, Y.  Ivaniushchenko, S. Kliuiev, A. Кliuiev, O. Azarov, S. Kurchenko, E. Stavytskyi, M. Zlochevskyi.

“We call on the Prosecutor General’s Office of Ukraine to apply the mechanism of common international investigation groups to investigate criminal offences of Yanukovych and his closest allies from the countries where the criminal activity was implemented as well (registration of companies, spending the illegally gained money). To strengthen the confidence in such an investigative activity, a prosecutor of a partner country must coordinate the investigation process” – said in the statement of Experts.

“In addition to the need of strengthening the ability of Ukrainian law enforcement in the investigation of particularly serious economic crimes by the international economic experts-investigators, activists stressed on the need to strengthen the mechanisms for verification of ultimate beneficial owners (beneficiaries) of Legal Entities.” – the Experts say.

Activists also urged for the fast creation of an independent Anti-corruption Court which will enhance the role and effectiveness of the newly established law enforcement agencies – the National Anti-Corruption Bureau and the Specialized Prosecutor’s Office. Activists are convinced that “A special mechanism of judges’ selection, including representatives of international organizations and other partner countries to the Competition Committee must be provided.”

Anti-corruption activists called on the authorities to intensify the efforts to fight corruption in Ukraine and its symbol – Viktor Yanukovych because, in their opinion, “today there are enough legal mechanisms to do it.”

Head of the Board of Transparency International José Ugaz  is one of the leading corruption fighters in the world. While serving as the Special Prosecutor in Peru, he led the prosecution of President Alberto Fujimori on charges of corruption and violations of human rights, resulting in four convictions.