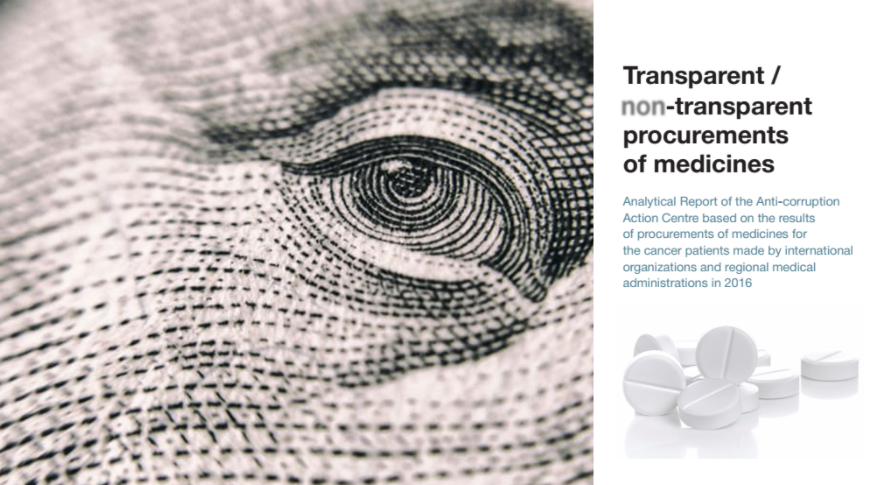 Those findings were presented by the Anti-Corruption Action Center as the result of monitoring of procurements of medicines for cancer patients by international organizations and through the Prozorro system.

“The price difference between the procurements of Transcarpathian Oncology Centre and the UNDP for the same drug used for the treatment of prostate cancer constitutes 4 times,” reveals Oleksandra Ustinova, Member of the Board of the Anti-corruption Action Centre. “This drug is Bicalutamide, manufactured by the company Vista. 394% of the price difference is those “kickbacks” which continue to go to the pockets of distributors, doctors, and chairmen of tender committees. Unfortunately, we should note that most of the “schemes”, that previously worked on governmental procurements of medicines and were eliminated by transferring procurements to international organizations, has moved to the regions.”

The experts of the AntAC named the most common schemes of overcharging for drugs during procurements, namely, backroom deals between market participants, combining different drugs in one lot, tailoring technical specifications for a specific manufacturer or supplier, which is not protected by the system Prozorto, as well as the registration of deliberately overestimated prices for drugs in the state register.

“For instance, in technical specifications some participants prescribe the need for the supply of an annual batch of drugs immediately, or within 6 hours from the moment of signing of the contract,” states Vitaliy Shabunin, Chairman of the Anti-corruption Action Centre. “It is not surprising that as the result a winner of the tender becomes a pharmacy, located on the territory of a hospital, a co-founder of which is a chief doctor of an institution. Unfortunately, due to the lack of control over the preparation of technical specifications, Prozorro system cannot deal with such schemes. We note that most of the “schemes” that worked previously during procurements at the national level now has moved to procurements held by hospitals.”

According to AntAC’s analytics, one of the biggest problems that was overcome by procurement through international organizations in centralized tenders, but still remained in the regions, was the purchase of medicines through dishonest distributors. So, if in procurements of 2014 for cancer patients held by the Ministry of Health of Ukraine, the share of manufacturers who participated in tenders was only 3%, in 2017 tenders held by UNDP this figure reached 57%.

AntAC’s experts state that in addition to the fact that the state covers only half of the necessary drugs for the treatment of children and 20% of adults diagnosed with oncology, even this money is not always used properly. A large number of drugs ordered by the state are not the main treatment, and super-expensive drugs are often not used. Thus, according to the program of pediatric oncology, 40%, or almost every other drug ordered by doctors, is a supplementary, but not the main treatment. Some of these expensive supplement drugs, such as antibiotics or antifungal agents, are not recommended for use by the International Society of Pediatric Oncology. In fact, many of them are procured, but not used. “The order of such drugs is lobbied by doctors because it is impossible to buy these drugs in the pharmacy,” explains Oleksandra Ustinova. “That is why pharmaceutical companies, through their promoters, endorse these drugs for use by doctors who input them in governmental orders. For this, doctors receive their percentages from the volume of purchases or other types of awards, such as travelling abroad for conferences or holidays.”