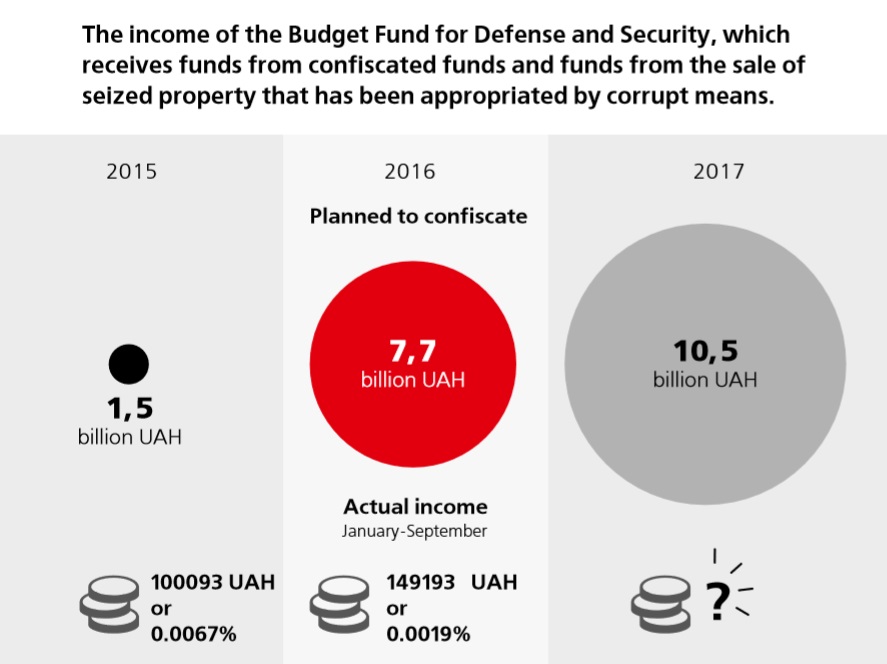 To assess the effectiveness of the asset recovery in Ukraine, the Anti-corruption Action Centre’s experts analysed the existing legislation, court decisions and publicly available information.

Special attention was paid to the investigation of resonant crimes of Viktor Yanukovych and former officials as well as the current practice of application of new seizure procedure in high-profile and publicly known investigations of the National Anti-corruption Bureau the General Prosecutor’s Office.

Given the lack of final convictions in these cases, and, hence, the lack of confiscation of related assets, the main focus was made on the issues of asset seizure in criminal proceedings.

Despite impressive official statistics on traced stolen assets abroad and inside the country, the actual state of asset recovery remains very poor. The income of the budget fund for defense and security, which receives funds from confiscated funds and funds from the sale of seized property that has been appropriated by corrupt means – – far less expected budget income – about UAH 250 000 for two years vs expected UAH 10 billion.

Key findings of the analyses explained in the Report (.pdf) ‘Recovery of proceeds of grand political corruption in Ukraine: what has been done in 2014-2016?”