Home Новини UAH2000 Each: How Ukrainian Taxpayers Paid for the Kliuev Brothers - DW 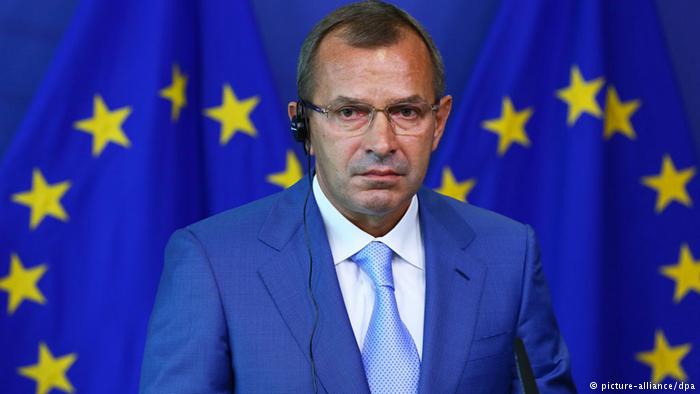 Owing billions in debts to state banks, which have not been paid back by the fugitive brothers Serhiy and Andrii Kliuev have put a strain on Ukrainians. Attempts to squeeze money out of Yanukovych associates’ companies in Austria have ended in failure.

The bankruptcy proceedings of the companies associated with brothers Serhii and Andrii Kliuev are entering their final straights in Austria. The Kliuevs were close associates of former President of Ukraine Viktor Yanukovych, and are now escaping justice by living in exile in Russia. The parent companies in the Kliuevs’ business structures are registered in Vienna, as such their creditors (the biggest lenders of which are Ukrainian state banks) are hoping to get at least part of their Austrian assets. The Kliuevs are cronies of the former President and their offshore companies were the registered owners of the luxury Yanukovuch residence at Mezhyhirya. Their companies presumably were receiving billions of Hryvnia in loans from state banks through the harnessing of political influence. It turned out that the loans did not have any serious collaterals and once the Kliuevs fled into exile, the state banks were left out of pocket.

The Kliuev brothers made their fortune in solar energy. Due to  legislation sitpulating that there be no “green tariff”, which the Kliuevs lobbied in favour of, the brothers got a stable source of income – the highest tariff on solar energy in Europe which only a few had access to. A number of solar stations were built within a few years above all thanks to generous loans from state banks. The Kliuevs’ company Activ Solar GmbH which was registered under Andrii Kliuev’s son-in-law Kave Ertefai got six loans from “Ukreximbank” totaling 8,59 billion UAH (109 million Euro, 224 million USD and 528 million UAH). The guarantor of these loans was the company “Active-Insurance” also owned by the Kliuevs through the company “Ukrpidshypnyk” and the Austrian firm SLAV Handel, Vertretung und Beteiligung Aktiengesellschaft (SLAV Handel).

These funds were not repaid and the bank went to court. In March, last year “Ukreximbank” won a court case against “Active-Insurance” which stipulated that “Active-Insurance” should return the sum of the loan amount immediately. Yet, it was not made until recently. “Ukreximbank” is also trying to impound the property of “Zavod Napivprovidnykiv”  through court action on aссount of the debt repayment, but there are no final decisions for now. At the same time, another chance to return part of the bank’s funds from Austria was the debt recovery procedure, carried out at Commercial Court of Vienna. It’s first stage finished on June 8.

“Ukrexibank” had reasonable claims to SLAV Handel’s assets because the firm was used as a guarantor by the Kliuevs. How the state bank could issue such loans against security of the company with assets much less than the amount of the loans remains under wraps. Nonetheless, the parent company of the Kliuevs’ business empire had more than 7 million Euros in annual income as of 2014 and the value of its share of the capital of its subsidiaries was about 80 million Euros. Therefore, the company had assets at its disposal.

However, the Austrian Association for the Protection of the Interests of Creditors Creditreform informed Deutsche Welle that as a result of the liquidation of SLAV Handel, the Austrian court managed to gain only some 140 thousand Euro on behalf of the creditors who had filed claims against SLAV Handel, constituting roughly 0.01%of what they had claimed for. Other assets were simply stripped from the company after the Kliuevs fled to Russia and before the insolvency process has begun. In order to retrieve any funds, creditors sued the Austrian state of Burgenland. The plaintiffs were demanding compensation on behalf of SLAV Handel for violation of company’s rights which had taken place back in 2006. According to judicial documents, the Kliuevs wanted to buy the bank Hypo-Bank Burgenland, which Burgenland state government had prevented, considering them dubious investors, and sold in a competitive bidding process for 100 million Euros to the GraWe insurance company. For many years, SLAV Handel was appealing the results of the process at all European levels and even forced GraWe to pay the difference in price to the state budget, it nonetheless failed to buy the bank. Creditors also did not get their demanded 3 million Euros in compensations for the non-economic damages and legal expenses, for several weeks ago the second instance court threw out their claims.

Small Chance for the Recovery of Active Solar’s Assets

Ukrainian creditors did not participate in the competitive debt collection procedure from SLAV Handel despite their claims against the company. Considering the miniscule amount which was received by the court-appointed manager, they did not lose much. The biggest creditor of the company, the Chinese state-owned CNBM International Corporation, after an agreement with the Kliuevs became an owner of the best Active Solar assets, and all solar power plants of the company on mainland Ukraine. “Active Solar does not own active solar power plants in Ukraine any more” the company confirmed to DW in Spring 2015.

Creditinform clarified that Active Solar owns subsidiaries only in the US, UK and Malta. According to Active Solar reports, the value of these assets is about 7 million Euros. “Repayment of debts as a results of the bankruptcy proceedings will not exceed one percent of the amount of claims of all 29 creditors”, Creditinform stated. The total amount of claims against Active Solar is 690 million Euros, of which the major part is accounted for by“Ukreximbank”. It is expected that the remains of Active Solar property will be sold by a court-appointed manager by September. If there are any resulting proceeds, they will be proportionally distributed among all 29 creditors. “Ukreximbank” could receive several million Euros in a ‘best-case’ scenario. Such amounts are the bare minimum relative to the 30-40 million Euros per year that the Kliuev family was reported to be earning on their assets.

“Ukreximbank” loans are, however, not all the financial burdens that the Kliuev brothers led when they fled to Russia. Companies owned by Yanukovych associates were generously credited by the state-owned “Oschadbank” until 2013. Loans were allocated for the building of 16 new solar power plants in Crimea. The outstanding debt for these loans is more than 19 billion UAH. “A number of court decisions were made in favor of the bank. Unfortunately, all measures for the compulsory collection of debts from “Solar” Group companies in Ukraine have not yielded any results”, DW was informed by “Oschadbank”.

The bank is unable to confiscate the solar power plants after Crimea annexation. International litigation with Russian Federation is currently pending. The trial process as to the return of almost a billion USD began in Paris this March. “All losses in regard to the payment of loans by the “Solar” Group are to be included in the amount of compensation to the Russian Federation”, “Oschadbank” stated. Formally, the Kliuevs are drawing back from their assets. According to the Austrian companies registry, they sold their company Black Sea Renewable Energie GmbH to anonymous buyers in 2013. However, they still may be beneficial owners.

The Burden is on Taxpayers’ Shoulders

Ukrainian taxpayers are, for now, paying off the Kliuevs’ debts. In 2014 “Oschadbank” posted 8.5 billon UAH in losses, a record in the Ukrainian banking industry. “Lack of control over these asset are the reasons of losses. We do not have any possibility to check the condition of the assets”, stated the Head of “Oschadbank” Andrii Pyshnyi. The government allocated 11.6 billion UAH from the State budget to the bank to support its total capital ratio. In other words, it was made at the expense of every Ukrainian. “Ukreximbank” is in a similar situation. It received 9,3 billion UAH in capital, replenishment in 2016 due to the Kliuevs’ debts. Every Ukrainian taxpayer (roughly 10.5 million individuals) is paying approximately 2 thousand UAH for Andrii and Serhii Kliuev.