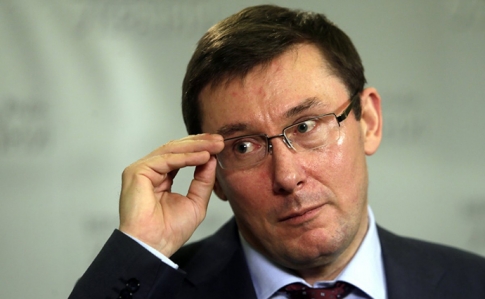 The head of the Prosecutor General’s Office, Yuriy Lutsenko, was called “PR Prosecutor” long time ago. In pursuit of loud statements Lutsenko either discloses undercover agents, or uncovers important information regarding the case, or informs suspects about searches.

As a result, the investigation of scandalous cases and real punishment of their subjects are under the threat. Moreover, the Prosecutor General himself does not take responsibility for what he has said.

At the same time, the Prosecutor General’s Office opens the criminal proceeding against the head of NABU Artem Sytnyk in the so-called case regarding the alleged disclosure of the investigation information and receives permits for tracking phones of journalists Natalka Sedletska and Kristina Berdynskykh.

At the end of 2017, the country found out the state secret from the Prosecutor General and his personal spokeswoman Larysa Sargan. They disclosed real names of NABU agents and details of special operation regarding the disclosure of corruption schemes in the Migration Service.

First of all, this is about a well-known “agent Kateryna” who took part in the joint special operation of NABU and FBI regarding the headline case of the “Amber Mafia”.

As a result of the special operation, two MPs of the Poroshenko’s block and the People’s Front received notices of suspicion and were deprived of parliamentary immunity.

Except “agent Kateryna”, they revealed another NABU agent who took part in another special operation together with the Americans. They wanted to reveal criminal group in the State Migration Service, which, according to the investigation, was trading Ukrainian citizenship, certificates and biometric passports.

In November 2017, the PGO and the SBU conducted the real raid on the intelligence network of the Anti-Corruption Bureau.

One of the NABU agents was detained regarding the “inducement of bribery”. They conducted searches of safehouses, seized agents’ equipment, documents, money and telephones.

NABU stated that such actions of the PGO and the SBU disrupted not only the special operation regarding the disclosure of the deputy head of the Migration Service Dina Pimakhova, but at least three other special operations.

The Prosecutor’s Office simultaneously opened a number of criminal proceedings against agents. Although the Law (Article 43 of the Criminal Code of Ukraine) foresees the release from the responsibility those people who are undertaking a special operation to expose a criminal group. This is standard international practice. Moreover, the Prosecutor General stated that agents managed to record Pimakhova’s offences even before the disclosure.

The fact of existence of such proceedings discredits this and other special operations of the NABU where agents were involved. And this may also work in favor of subjects of the cases during trials.

The Prosecutor General personally publicly commented on details of the undercover operation and showed the video in the Verkhovna Rada with real first and last names of agents. Also, people were able to find pictures of safehouses in the Internet.

The disclosure offended many experts. It is hard to overestimate its negative consequences.

This is not just the disruption of the special operation. This is wasted time and wasted budget funds. Moreover, this is a real danger to lives and health of people. Nobody was brought to any responsibility.

The Anti-Corruption Action Center sent the appeal to the Security Service of Ukraine regarding the fact that the PGO had disclosed the state secret and had published last names and pictures of secret employees of NABU. The criminal proceeding was opened according to activists’ appeal, but there are still no results.

Earlier secret employees of NABU were also disclosed by the Prosecutor General’s Office, which was headed by Lutsenko at that time.

In August 2016, the PGO illegally detained for 11 hours two employees of NABU, who, according to the court’s decision, were spying upon the scandalous former PGO’s investigator Dmytro Sus.

Sus is due in no small part to the Department for Investigation of Particularly Important Economic Cases, which is also called “Kononenko-Granovskyi Department”.

After the illegal detention of Bureau’s employees, NABU opened the proceeding against the PGO’s investigators due to abuse of power, illegal detention and causing bodily injuries. The case has been investigated in the SBU for 2 years. Nobody has received the notices of suspicion.

However, the case regarding the disclosure of state secret was not opened. Nobody was brought to the responsibility for the disclosure of last names and pictures of secret employees of the NABU across the country.

Although, according to the Law, information about membership in special operation unit of the NABU is considered as the state secret with the label “secret”.

Later, in spring 2017, the NABU employees arrested Sus at Boryspil airport on suspicion of seizing property in particularly large amount. At the moment, the trial is ongoing. The evidence is reviewed.

INFORMED ABOUT SEARCHES TO THE CAMERA

In September 2016, the Prosecutor General initially announced about another “big fish”. And later he publicly informed this “fish” about future searches at his office at the briefing in Odesa.

This is about the member of the High Council of Justice Pavlo Grechkivskyi, who, according to the Prosecutor General, demanded bribes for resolving cases in courts. He is finally sued on suspicion of fraud.

This is not surprising that during searches the day after Lutsenko’s briefing, no evidence was found and nothing was seized at Grechkivskyi’s office.

Later the case was forwarded to the court regarding the fraud. It is currently ongoing in the trial. The evidence of the Prosecutor General’s Office is reviewed.

DISCLOSURE OF THE STATE SECRET

Personal page in Facebook of the Prosecutor General has also become the platform for disclosure of state secrets.

In May 2018, after the operation regarding prevention of the attack on the journalist Arkadiy Babchenko, when the SBU staged up journalist’s murder in order to allegedly disclose instigators, Lutsenko published statistics on similar operations: “This staging-up is foreseen in Article 271 of the Criminal Code of Ukraine and was used more than 30 times in last 2,5 years”.

Statistics about the number of special operations, such as Babchenko’s case, is the state secret which is classified by the order of the SBU “On approval of Summarizing the information that is state secret”.

In particular, Paragraph 4.4.4 of this order states that information about conducting complex or separate operational-search mission, which is conducted to disclose other crimes, has the label “secret”. The statistics published by the Prosecutor General is found in relevant secret reports and can not be disclosed.

Referring to the following order, the SBU, for example, refuses to provide even general information about statistics on the work in the field of economic security of the Service. The explanation is that “statistic indicators of the counterintelligence activities of agencies and the SBU departments are state secrets and are protected”.

The disclosure of state secret, even formal, foresees criminal responsibility classified under Part 1 Article 328 of the Criminal Code with punishment of 2 to 5 years of imprisonment, as well as disciplinary responsibility of the prosecutor.

In February 2018, the Commission managed to open and successfully close the proceeding regarding Lutsenko’s posts in social networks.

At that time, they decided that they could not bring him to responsibility, since the order on imposing the punishment on the ground of the Commission’s decision should be signed by the Prosecutor General, and Lutsenko can not sign it for himself.

According to the Law, the Qualification Commission can not make the decision regarding the reprimand or other punishment for the Prosecutor General. However, it has the opportunity to send the appeal to the Verkhovna Rada regarding his dismissal.

Transparency International Ukraine appealed to the Qualification Commission regarding Lutsenko’s posts in Facebook. The organization stated that the Prosecutor General violates the presumption of innocence by publications regarding related subjects arrested on suspicion of committing criminal offense.

It is obvious that Lutsenko has old bad habit to disclose information. During his press conference in 2009, when he held the position of the Minister of Internal Affairs, he disclosed the adoption secret to the camera.

Commenting on the situation regarding the abuse of children in Artek, the Minister said that the affected children had been adopted by their parents.

The mother of children asked the President Viktor Yushchenko about his personal control regarding the investigation by the Prosecutor General’s Office of the appeal about bringing Lutsenko to responsibility for the disclosure of adoption secret. However, the PGO refused even to open the criminal proceeding.

It seems that nobody is going to open criminal proceedings against Lutsenko regarding facts of unlawful disclosure.

We hope that investigators and prosecutors manage to produce permits regarding disclosure of information of the pre-trial investigation by the Prosecutor General.

Otherwise, all these facts will confirm once again that Yuriy Lutsenko is only bluffing and manipulating at his position.