They don’t pay the state. 100 biggest debtors of Ukraine – Investigation

Tax debt before the state is getting close to 80 billion UAH. Among debtors of Ukraine – oligarchs, people’s deputies and corrupted state enterprises.

10% of income of the state budget. This threshold on 1 July 2017 reached the corporate tax debt. Represented in absolute numbers, it reaches a record high amount of 77,4 billion UAH. For comparison: in January 2014, this indicator was at the level of 9,5 billion UAH.

We introduce for your attention a list of the 100 largest debtors who owe the Ukrainians an amount that equals budget deficit of the country for 2017.

Where are the biggest debts concentrated?

EP addressed the State Fiscal Service with a request to provide a more detailed information regarding the tax debt as of 1 July 2017.

Fiscal service provided information on the debt amounting to 56,77 billion UAH. It did not include debts of companies that undergo bankruptcy procedure and companies regarding which there is a court decision on termination of collections to the state budget.

Judging from the data of the State Fiscal Service, the biggest is the VAT debt – 21 billion UAH. Second and third places take – rent (16 billion UAH) and income tax (13,7 billion UAH). 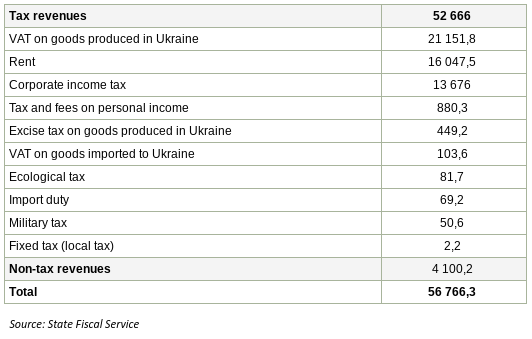 Three sectors of economy where the most debtors are concentrated are the following: extraction of oil, monetary intermediation, coal mining.

Three sectors of economy having the biggest number of debtors 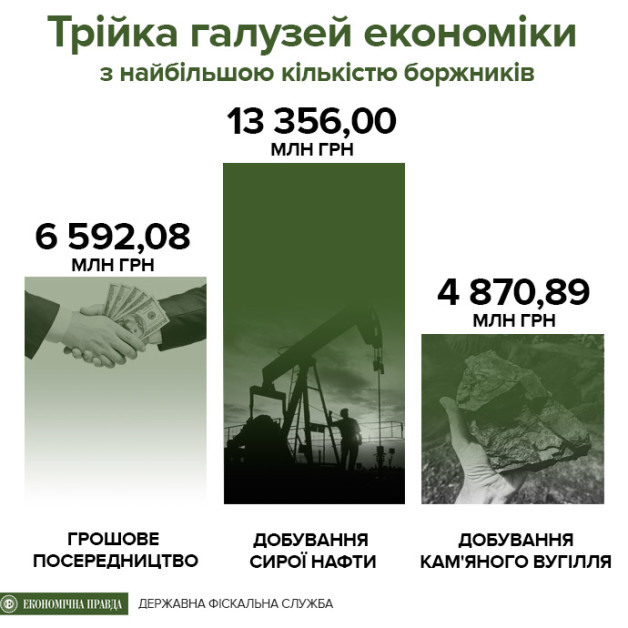 Who does not pay to the state

Having used the data from data.gov.ua, EP identified 100 biggest debtors to the state. The biggest debtor is still «Ukrnafta» owned jointly by state and «Privat» Group of Ihor Kolomoiskiy and Hennadiy Bogoliubov. The latter two have 42% of shares of the company.

Debt of «Ukrnafta» before the state exceeded 13,2 billion UAH. Perspectives for it to be settled are quite vague. For the last year it grew by 2,5 billion UAH. The company has been suing the state for many years. According to EP sources, now “Ukrnafta” refuses to pay current income tax liabilities.

The second place takes one of the structural units of “Ukrnafta” – Oil and Gas Production Management “Poltavanaftogaz”. Its debt reaches 2,392 billion UAH. It has grown by 160 million UAH during a year.

Third place is taken by the long-suffering “Delta bank“. Amount of debt – more than 2 billion UAH. The bank belonged to a businessman Mykola Lagun. In March 2015 the institution was declared insolvent and is now in the liquidation stage. The main debt was formed during the last year and does not concern the former owner.

The debt is mainly comprised of VAT liabilities on operations with property sales. In its essence VAT is a tax that is charged to the price of a product or service in order to receive profit.

Debts of such banks are “dead”, these amounts can only be written off. Debts are charged because of the legislative collision. In general, withdrawal of insolvent banks from the market led to accumulation of a large tax debt in the financial sector.

Among the biggest debtors are 15 such institutions. For example, three biggest bank debtors undergoing liquidation procedure – “Delta Bank”, Pivdencombank (fifth place) and “Bank Finance and Credit” (seventh place) – did not return to the state more than 3,6 billion UAH. The fourth place is taken by “Nadra Geocenter” Llc, that extracts gas. The company owes the state around 1,5 billion UAH as extraction rent.

As we know, “Nadrageocenter” belongs to the ex-deputy Alexander Onyshenko, who fled the country in 2016. Onyshenko is on the wanted list now. According to the law enforcement officers, his companies were illegally receiving tax extensions. Head of the State Fiscal Service Roman Nasirov is believed guilty of providing such tax extensions.

The group of those who don’t pay rent also includes companies “XAC“, “Karpatnadrainvest” and “Plast” that also belong to Onyshenko. They owe more than 600 million UAH.

Among «rent» debtors is also ‘Tsefei” Llc (291 million UAH) taking the 30th place in the rating. Earlier the enterprise belonged to the head of the deputy group “Volia Narodu/Freedom of People” Yaroslav Moskalenko. Now the deputy assures that he sold his stake. Interviewees of EP are connecting “Tsefei” with Onyshenko. 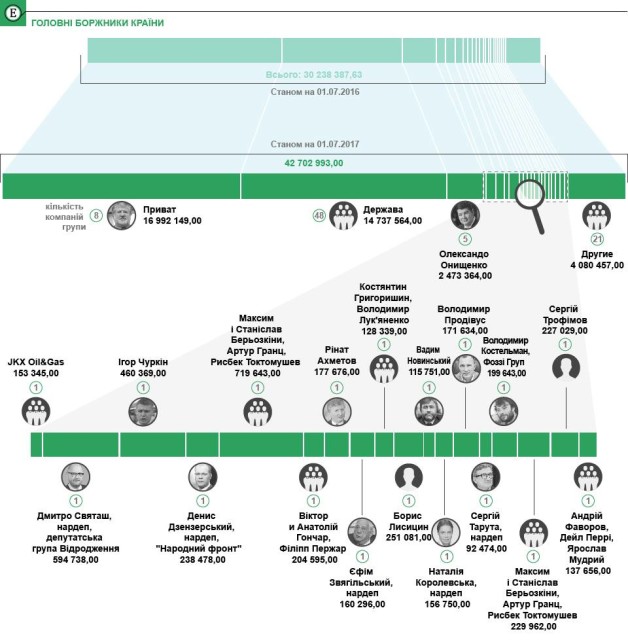 The sixth place with 796 million UAH debt takes the State Enterprise “Makiivcoal”. It is situated on the occupied territory which means that it is useless to believe that money will be returned.

State Enterprise “Selidivcoal” is also on the list of ten biggest debtors (ninth place). From this enterprise, that is located in the government controlled area, the state did not receive 635 million UAH. As of now, “Selidivcoal” is controlled by Vitaliy Kropachev who is believed to be the curator of coal industry.

In general, there are 19 state mines in the list of debtors with their cumulative tax debt reaching 5,3 billion UAH. Among them there are many objects that stayed on Separate Districts of Donetsk and Luhansk Regions.

Of course, financial situation of mines was influenced by the war, however, along with this, state coal enterprises turned into feeders for representatives of authorities. Money from state mines is being laundered off through procurements of goods and services on enrichment of coal at inflated prices.

Eighth place is taken by earlier successful agricultural holding “Creative” — the firm of Maksym and Stanislav Berezkins. The latter is a member of parliamentary faction “Vidrodzhennia”. In September 2015, the family sold main assets of the company to the unknown businessmen Rizbek Toktomushev and Artur Granz. Granz is a partner of one of the main functionals of “People’s Front” Andriy Ivanchuk.

According to data.gov.ua, “Creative” and its other structural unit – Private Enterprise “Ellada” – owe the state nearly 950 million UAH.

The tenth place with 595 million UAH debt takes “Avtoservice-T” Llc, which is part of one of the biggest auto holdings – AIS Group. A businessman from Donetsk Vasyl Poliakov and ex-member of Party of Regions Dmytro Svyatsh, now member of “Vidrodzhennia” Group, are believed to be the owners of the holding.

According to interviewees from the State Fiscal Service, the most problematic ones are state enterprises. In order to avoid paying taxes, they use bureaucratic schemes.

Bankruptcy and liquidation procedures also create obstacles to receiving debts. Thus, “Tsentrenergo” that is controlled by the President’s friend Ihor Kononenko, owes the state 475,1 million UAH. The enterprise undergoes bankruptcy procedure which means that it is impossible to apply coercive charges.

According to the information from the State Fiscal Service, the State Enterprise “Ukrzaliznychpostach” is also not alright. The enterprise is being liquidated, does not conduct any activities, assets were given to “Ukrzaliznitsya” that does not settle 335,6 million UAH of debt. Materials were submitted to the Prosecutor’s Office.

Substantial part of big tax debtors – clients of the Office of Big Tax Payers or its territorial units. EP addressed the head of the Office of the State Fiscal Service Eugene Bambizov with a request to comment on the situation.

— Office of big tax payers provides for 80% of all tax revenues of the state budget. In the general amount of tax debt our part is luckily less – 13,2 billion UAH or 23% from the whole tax debt.

The first and the most problematic group of debtors – banks in the liquidation stage. Their debt amounts to 6 billion UAH and continues cumulating. The reason behind this – legislative collision. When bank gets under the liquidation procedure, it is subject to the law on households’ deposit guarantee system which frees them from paying taxes.

However, since banks continue to form their insurance reserves, according to the Tax Code they continue registering their tax liabilities. The procedure of liquidation can be conducted for years and all this time formation of reserves and cumulation of tax debt may continue. We proposed to the Ministry of Finance to amend the Tax Code: as soon as the bank liquidation procedure begins, the tax liability shall be suspended. There is no hope that these liabilities will be settled. The Cabinet of Ministers may submit these amendments for consideration of the parliament already in Fall of 2017.

Second big category of tax debtors – state enterprises. It’s not the taxes that they owe, but the part of net profit for the amount of more than 1 billion UAH. This type of payment is not being classified as tax and is not subject to coercive charges that can be applied to tax payments.

There is nothing we can do, they can be charged only by court decision. We ask the Cabinet of Ministers to put pressure on these enterprises, however, so it looks, they count exactly on the lack of charging mechanisms. We have nearly 5 of such debtors. Some time ago article 5 of the Tax Code (regarding measures on tax debt settlement – EP) allowed us to write off funds from accounts of debtors.

Our orders could be applied only within main operational hours. Using the instruction of the National Bank of Ukraine №22, banks started to conduct operations for their clients – our debtors out of operational hours. Meaning no operations before 16:00, and all transactions are conducted from 16:00 to 18:00. “Ukrnafta” does that. They conduct all transactions within two hours and we cannot charge anything in this situation. Instruction of the National Bank of Ukraine needs to be changed.

The third group of debtors – state enterprises at the liquidation or bankruptcy stage (not banks) who received additional tax liabilities. The complexity lies in the fact that these enterprises have big payables and we are in the seventh order of settlement, meaning debts before the state are settled in the last turn.

The fourth group – enterprises from the Anti-terrorist operation zone. They owe nearly 225 million UAH and they cannot be charged. We are ready to charge 5,6 billion UAH of tax debt (this is the so called active debt) and 2 billion UAH from this amount is the debt of “Ukrnafta”.