Home Новини The role of international experts was nullified: the High Council of Justice blocked the judicial reform 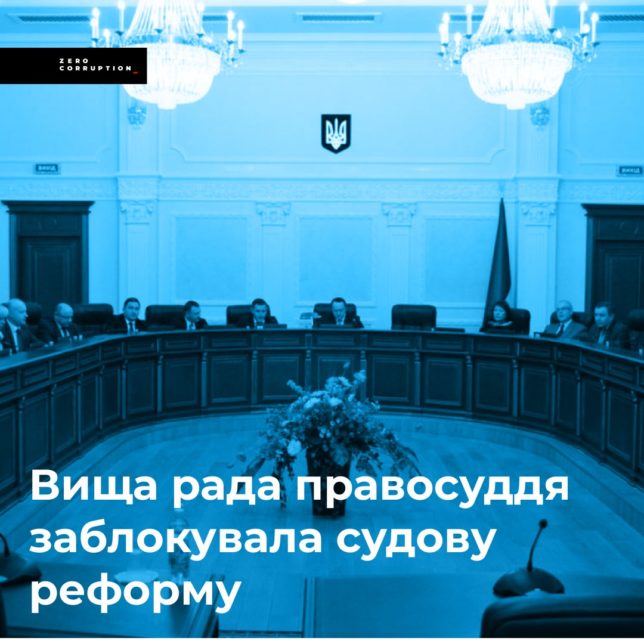 On December 10, the High Council of Justice approved the rules of procedure on holding the competition to the High Qualification Commission of Judges (HQCJ).  According to it, the role of international experts in the selection panel of the new HQCJ is completely nullified.

Thereby, the HCJ shut the door on the whole judicial reform initiated by the President.

In particular, these rules of procedure do not actually differ from those published a few days ago in the media.

“These rules of procedure of the HCJ once again confirmed the need of its relaunch. After all, members of the HCJ usurp power during the competition to the HQCJ. International experts will have no influence on the competition. According to such scenario, it is most likely that judges controlled by judicial clans will become members of the HQCJ. This means no changes”, commented Halyna Chyzhyk, the expert of the Anti-Corruption Action Center.

Thus, the HCJ completely neutralizes the role of international experts in the selection panel by its regulation. Instead of selecting truly worthy candidates, the panel will have to collect notes in order to prove the candidate’s guilt regarding some violations and to justify his or her low scores.

In return, winners of the competition will be determined not by voting of the selection panel, but by received scores. In the end, even these scores will not have mandatory value for the HCJ, which, according to the rules of procedure, will be able not to appoint shortlisted candidates.

It is unlikely that international experts will agree to legitimize this farce by their honest names. It is also unlikely that reputable lawyers will want to take part in this competition, which is controlled by old judicial system.

We should remind that relaunch of the HQCJ is one of key elements of the judicial reform initiated by the President Volodymyr Zelenskyi. This is reaction on failure to clean up courts and failure of previous HQCJ to select quality staff in the judicial system.

The President and the lawmakers suggested that the new HQCJ should be selected not by dependent and corrupt judges, but by the selection panel with international experts. According to the law, the panel should select 12 best candidates for 12 positions to the HQCJ and submit this list to the HCJ for approval.