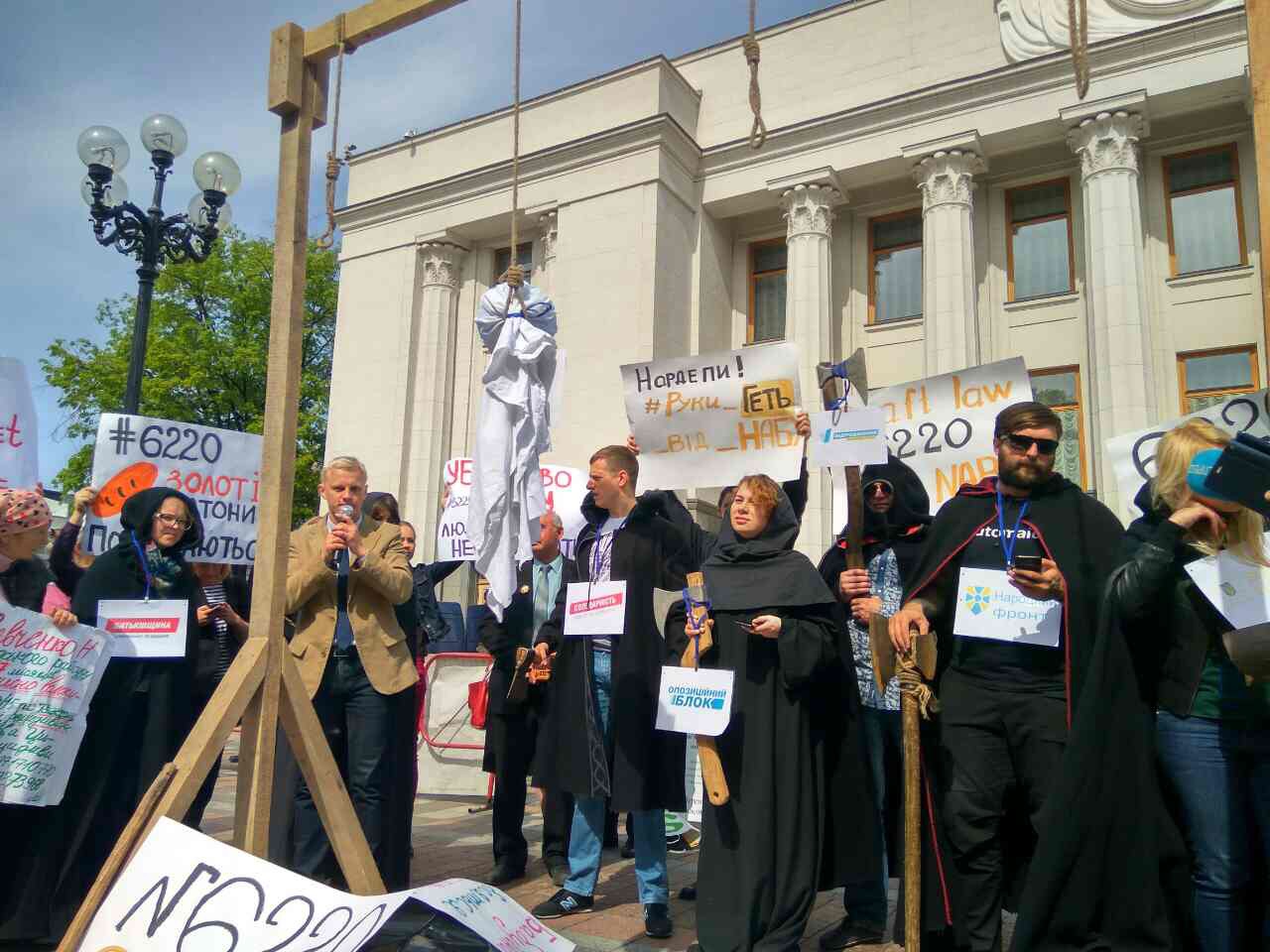 The Anti-corruption activists dressed up as hangmen and wearing the masks of the leaders of the parliamentary factions has set up the gallows in front of the Parliament. The gallows has an inscription “the Draft Law No. 6220 is the destruction of the National Anti-corruption Bureau by MPs”.

The Draft Law No. 6220, which is to be voted in the Parliament this week, will destroy independent investigation of the NABU and make its detectives close criminal investigations against corrupt top-officials.

The activists protest the Draft Law No. 6220, which provides that the NABU detectives can not investigate corruption offences under their jurisdiction if earlier any other law enforcement agency has closed the investigation of the same offence. Meaning, if the PGO or National Police closes the investigation of some case, the NABU will be forced to do the same. 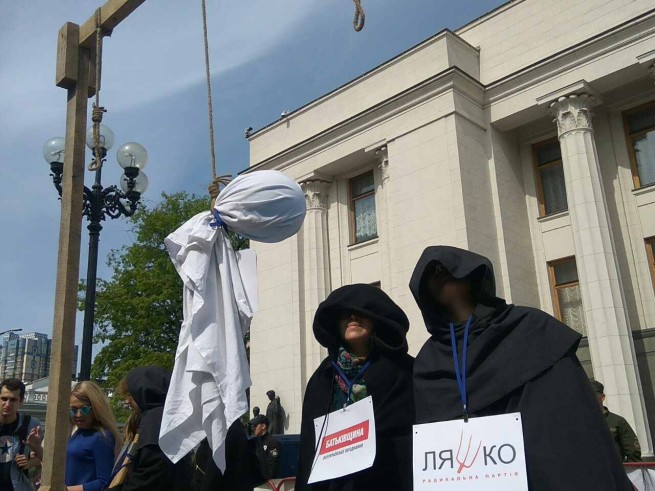 “In practice, it would look as follows: the PGO opens the investigation, for instance against Martynenko, concerning other episode and then closes it based on any reason. The NABU will be forced to close its investigation as well,” says Vitaliy Shabunin, the Head of Board of the Anti-corruption Action Centre. “This will allow to manually decide which NABU cases should be closed using other law enforcement agencies as proxies,” he adds.

The activists are sure that this Draft Law will unite the biggest parliamentary factions in order to “kill” the new independent anti-corruption agency. The initiator of the Draft Law is MP from the Block of Petro Poroshenko, Vadym Denysenko. He had previously also authored scandalous draft law aimed to destroy electronic declarations of assets, which was later vetoed by the President. 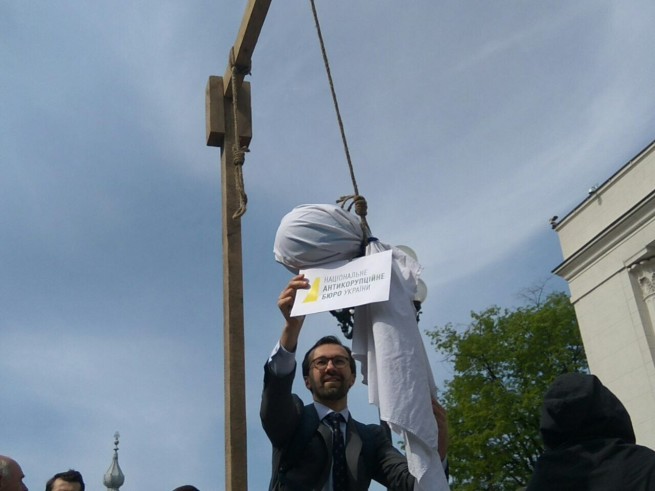 The anti-corruption activists warn that although the Draft Law is aimed to protect the business from racketeering of the law enforcement agencies, it has nothing to do with it. “The Draft Law prescribes that all law enforcement agencies, including the NABU, are forbidden to investigate criminal cases if any other law enforcement agency has started and closed investigation of the same event,” explains Artem Sliusar, the lawyer of Transparency International Ukraine. “For instance, if the PGO closes the case concerning illicit enrichment of one of the MPs, then the NABU would not be able to open its own investigation even though it possesses the necessary evidence.”

“This Draft Law intends to put NABU’s independent investigations under the direct control of the Prosecutor General. In fact, it destroys the jurisdiction of the Bureau, because the detectives would not be able to investigate corrupt offences committed by the kleptocrats,” explains Yegor Soboliev, the Head of the Parliamentary Anti-corruption Committee, “We will insist on excluding the NABU from the Draft Law. The Bureau does not investigate the business, consequently, it has to be excluded.”

The Draft Law No. 6220 has passed the first reading in April. On Wednesday, 17 May, the Committee on Law Enforcement Activities will consider the amendments before the second reading. The vote on the Draft Law is scheduled for Thursday.

“This is a joint compromise of pro-governmental parties which fear the independent anti-corruption agency,” states Kateryna Butko, the activists of Automaidan. ”After the cases against Nasirov, Martynenko, and Onyshchenko, every political force is willing to vote for a draft law that enables the control over the Anti-corruption Bureau. The adoption of the Draft Law will mean the dismantlement of the anti-corruption reform and full recoil of the fight against corruption in Ukraine.”

The G7 ambassadors has already expressed their concern about the Draft Law which endangers NABU.

Hanna Hopko, the MP and the Head of the Committee of Foreign Affairs, told, that, “norms of the Draft Law No. 6220 contradicts the international obligations of Ukraine in the sphere of anti-corruption. They will become a warning sign for for our European partners,  who started developing a special mechanism of controlling the sustainability of the reforms performed within the framework of the Visa Liberalization Action Plan with Ukraine”.

The National Anti-corruption Bureau also called the MPs not to support the Draft Law. They insist that “the adoption of the draft law will enable other law enforcement bodies to manipulate with current investigations” is unacceptable.

During the press-conference, the President Petro Poroshenko said, that he will veto the draft laws which “disrupt the performance of anti-corruption bodies”.

Activists of NGOs, the Anti-Corruption Action Center, AutoMaidan, the Reanimation Package of Reforms, Transparency International Ukraine, the NABU Civil Society Oversight Council, and MPs participated in the street action in front of the Parliament.