The court made a decision regarding Martynenko’s appeal against AntAC

Pechersk Court fully satisfied the appeal of former MP Mykola Martynenko against the Anti-Corruption Action Center. Former MP requires to delete all information and references about him from the website of AntAC’s project – pep.org.ua. Activists consider court’s decision as the offence of freedom of speech. They are going to appeal against it.

“The decision of Pechersk Court creates the precedent to file similar appeals against journalists who highlight particular criminal trial regarding Mr. Martynenko (or any other person). They are becoming potential “targets” now. And they could also be required to remove references about Politically Exposed Persons from publications”, – says Daria Kaleniuk, AntAC’s executive director.

“The Laws of Ukraine clearly state that anyone can freely use and distribute public information in the form of open data with reference to the source. The Anti-Corruption Action Center does that in its Public Register of Domestic Politically Exposed Persons (pep.org.ua)”, says Oleksiy Boyko, AntAC’s lawyer.

Mykola Martynenko sent the appeal to the Pechersk District Court in Kyiv against the NGO Anti-Corruption Action Center regarding protection of non-property rights to use the name and inviolability of business reputation in June 2018.

In the appeal Martynenko accused the AntAC of alleged illegal use of his name in the context of investigations of criminal proceedings and corruption cases where his guilt or participation has not yet been established by the court.

This concerns Martynenko’s dossier, published in the open Public Register of Domestic Politically Exposed Persons. This database was developed by the NGO. 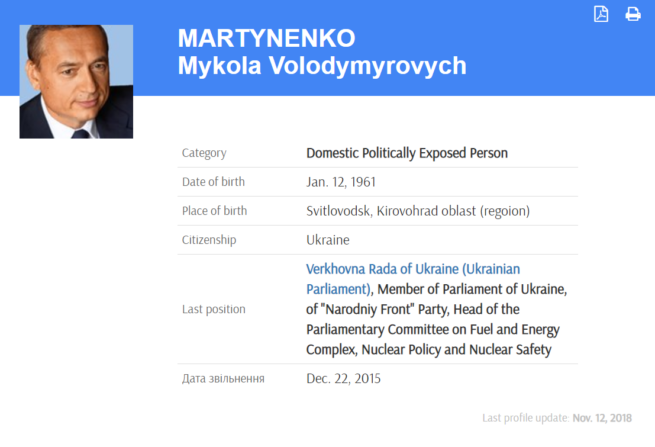 It helps banks to identify politically exposed persons among their clients and has over 30,000 documented records of Ukrainian politicians, heads of the prosecutor’s offices, heads and judges of the Constitutional and the Supreme Courts, heads of the Appellate Courts and top law enforcement officials.

In the appeal, Martynenko cites quotes from the plot of court decisions about his connections with offshore companies, with the help of which financial transactions were conducted. NABU detectives established it.

In the opinion of former MP, this defames his business reputation. Therefore, he demands to delete his dossier and to prohibit the AntAC to publish information about criminal proceedings or information about corporate rights with reference to his name.

The AntAC lawyers explain that Martynenko does not have grounds to be offended to his own dossier, published in the Public Register of Domestic Politically Exposed Persons.

Moreover, the European Court of Human Rights has repeatedly stated in its numerous decisions that when choosing the profession, politicians should be open to harsh criticism and vigilant public oversight. This is the burden that they must accept in a democratic society.

Collected information is either confirmed by documents, namely by court decisions or excerpts from the state registers, or is already known to public from numerous journalists’ investigations and his own comments. Moreover, his case is already being heard in the court.

Moreover, NABU and SAPO have repeatedly published information about the course of pre-trial investigation regarding Martynenko’s case.

Martynenko himself personally gave interview about criminal proceedings against him. From the legal point of view, in fact this can be considered as permit of the person to use his name in such context.

We should remind that the trial in the criminal proceeding against former MP Mykola Martynenko regarding theft of 695 million UAH [17,28 million USD and 6,4 million EUR] at two state enterprises is ongoing. The case is being considered by the Shevchenkivskyi Court. It is actively covered by the AntAC, which obviously also creates inconveniences for former MP.