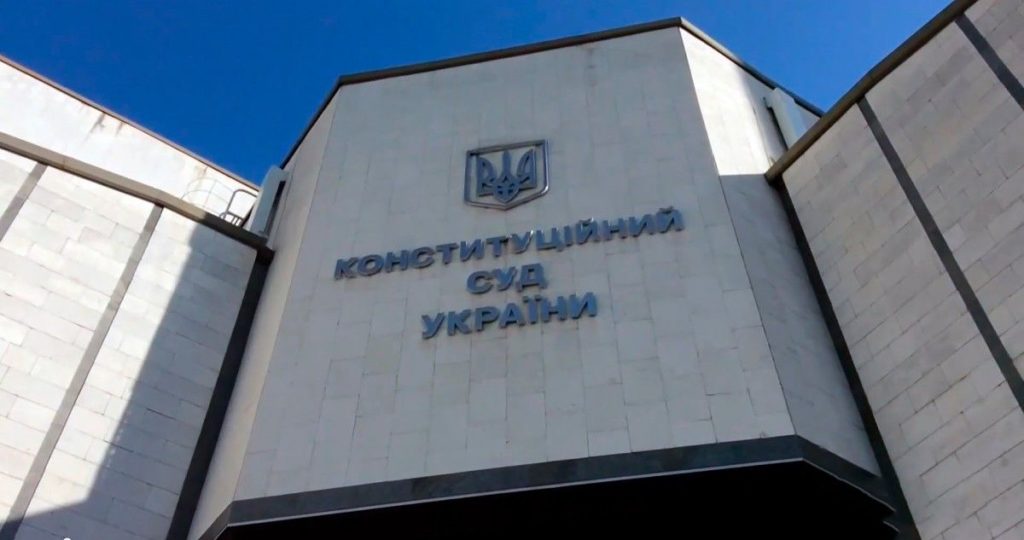 The court opened a respective proceeding in October 2018 upon the appeal of Zaporizhya Ferroalloy Plant JSC. This company is controlled by Pryvat Group of Igor Kolomoisky and Gennadiy Bogolyubov.

Kolomoisky’s plant considers the powers of NABU to send civil appeals to the court regarding the invalidation of agreements, where subjects of top corruption criminal investigations are involved, unconstitutional.

The cancellation of such agreements through the court is the mechanism for stopping corruption schemes for the time while the investigation is ongoing and sentences have not been made yet. In total, NABU had filed 42 appeals that invalidated 92 doubtful agreements during 4 years of its work.

“7 billion UAH will be returned to state enterprises thanks to the work of NABU’s lawyers. If the Constitutional Court makes the decision in favour of Kolomoisky’s company, we will lose this money. For comparison, this is a bit more than the annual budget of the Ministry of Health for medications for seriously ill Ukrainians,” states Olena Shcherban, the AntAC lawyer.

For example, the agreement on dredging works for the amount of 712 million UAH was found invalid, according to the appeal of the NABU against Ukrainian Sea Ports Authority. According to the same principle, the agreement between Zaporizhyaoblenergo and Holding Company Energomerezha was found invalid for the amount of 112.3 million UAH, or the additional agreement between Ukrzaliznytsya and Wog Aero Jet LLC regarding the supply of diesel fuel, according to which railway employees overpaid 92 million UAH.

The consideration of the appeal of Kolomoisky’s company will be held on March 27 at 10.00 a.m. during the closed part of the plenary meeting of the Second Senate of the Constitutional Court. It is possible that the court will make the final decision in the case on the same day. 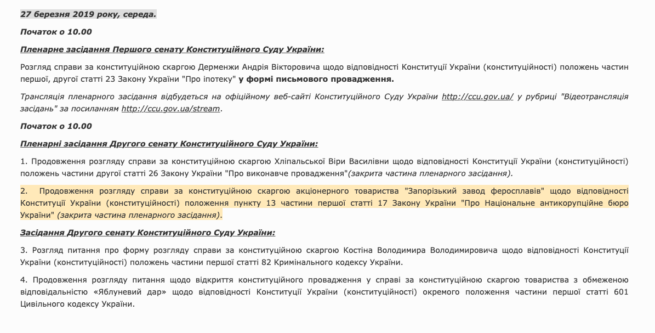 In January 2019, a similar appeal was already sent by Ukrnafta PJSC to the Constitutional Court. Kolomoisky and Bogolyubov control more than 40% of Ukrnafta. However, the First Senate of the Court refused then to open the proceeding based on this appeal on February 14, 2019.

Grounds for NABU’s appeal against Zaporizhya Ferroalloy Plant were two agreements on the transfer of debt and agreement on the admission of countervailing homogeneous requirements.

According to another agreement, Zaporizhya Ferroalloy Plant had to receive the same amount of debt from the Holding Company Energomerezha PJSC, whose Chairman of the Board is Dmytro Kryuchkov. In 2016, NABU announced him wanted for withdrawal of the third part of one billion UAH of Zaporizhyaoblenergo PJSC.

The companies concluded two trilateral agreements regarding the transfer of debt to Zaporizhyaoblenergo for consumed electricity from Zaporizhya Ferroalloy Plant to Energomerezhi.

However, according to the Law, the consumer must pay for consumed electricity by transferring funds to the current account of the supplier with the special mode of use.

The Holding Company Energomerezha PJSC is not the consumer according to the current Law. And therefore, concluded agreements contradict requirements of article 15-1, 26 of the Law of Ukraine “On Electric Power” and paragraph 1 of the Regulation on the procedure for calculating the electricity. This became grounds for the invalidation of the above-mentioned agreements.

In November 2017, such decision was made by Kyiv Economic Court of Appeal, and later by the Economic Court of Cassation of the Supreme Court, which confirmed the above-mentioned agreements invalid. Therefore, Zaporizhya Ferroalloy Plant should return 164.9 million UAH to Zaporizhyaoblenergo.