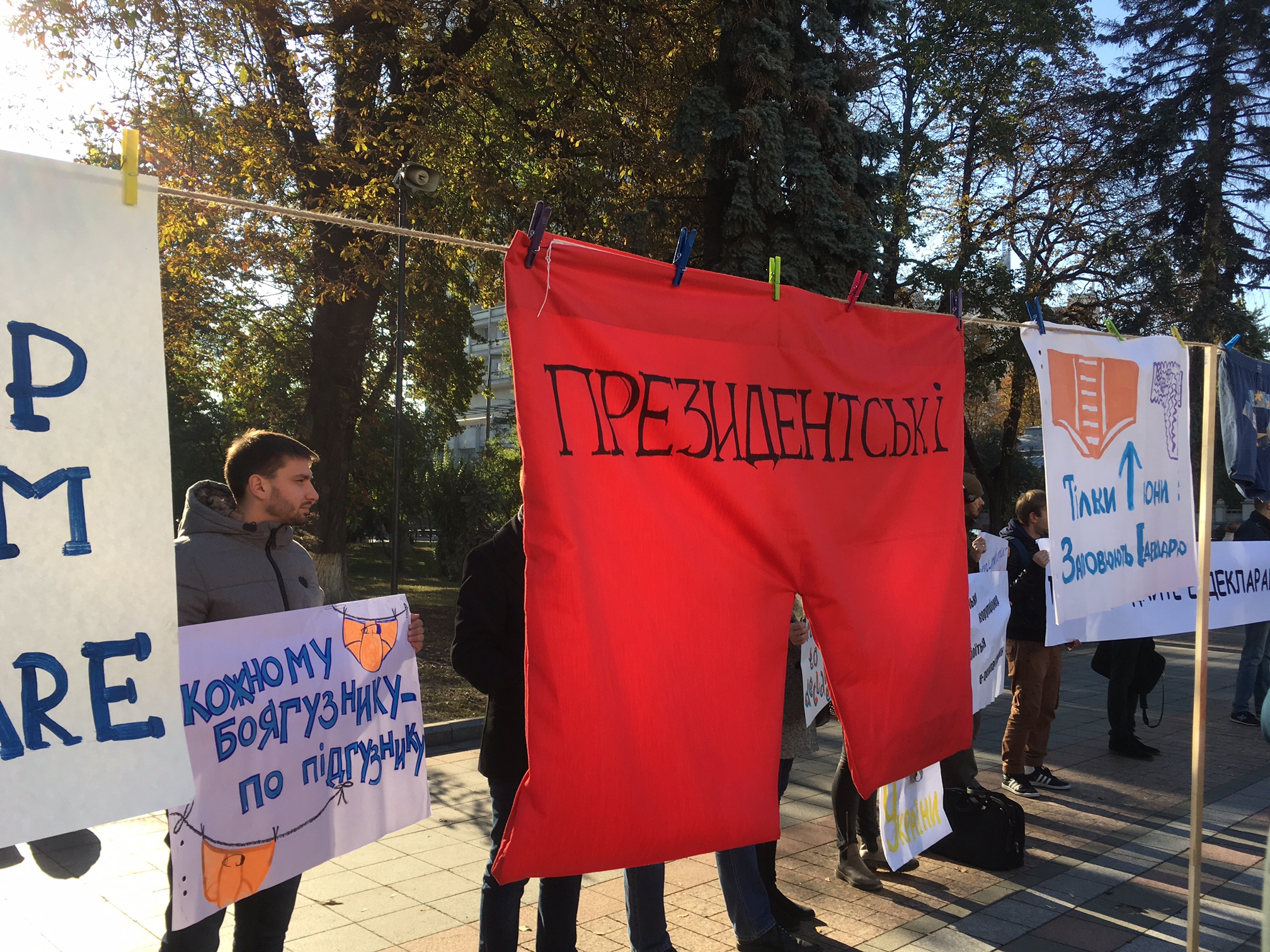 In front of the governmental buildings, the anti-corruption activists hung “personal panties” for officials and demanded top officials not to be scared to submit their e-declarations for 2015.

In front of the Parliament, the Cabinet of Ministers and the Presidential Administration, the activistsurged the speaker of te Parliament, the Prime Minister and the President not to be “sissypants and cowards” and submit their electronic declarations to National Agency for Prevention of Corruption. This way they can set an example for other officials who have to submit their electronic declaration until the end of October. 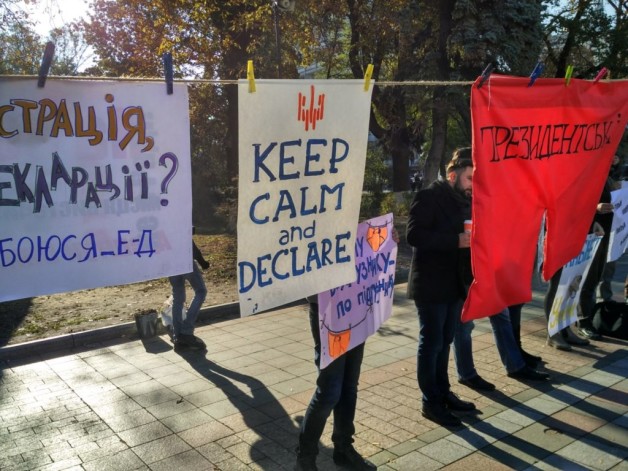 Currently, the Registry does not have the declarations of either the President or the Prime Minister or the Speaker of the Parliament.

“Besides me, only 6 MPs have submitted their declarations,” tells Yegor Sobolev, the MP, the Chairman of the Parliamentary Committee on Preventing and Combating of Corruption. “I’ve urged fellow MPs by setting an example and demanded them to show that they not only adopt laws but also can comply with them. This also applies to the President, who has personally promised the international partners that the electronic declaration in Ukraine will be timely implemented, but he still has not proved this in practice as he has not submitted his declaration.” 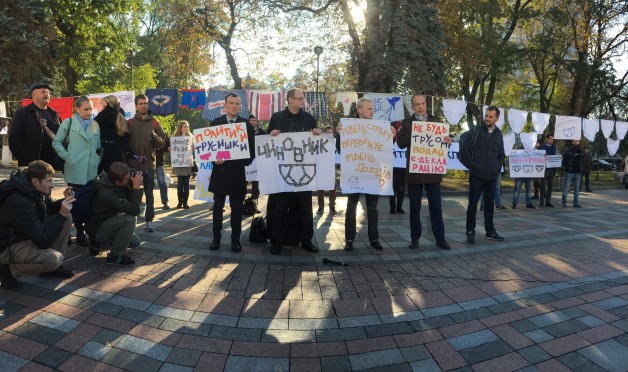 During the first wave of the submission of declarations, namely from 1 September to 30 October. The group of officials who have to submit their declarations is quite a big one. It includes the head of the Presidential Administration, ministers, deputies, advisers and assistants of ministers, members of the National Commissions and Antimonopoly Committee, the Chairmen of the State Property Fund and the National Bank as well as their deputies, MPs, judges, prosecutors, detectives of NABU, investigators,  senior military officers, and civil servants of category “A” or “B”.

“There is a criminal liability of imprisonment for up to 2 years for non-submission or lie in a declaration. The government is looking for ways to avoid this and to circumvent the law. We have already repulsed 8 attempts to amend the law on electronic declarations, but we understand that there will be more attempts. For example, two weeks before the deadline politicians will try to abolish criminal liability for failure to submit a declaration. Some speakers of the authorities have already started to talk about it out loud. Also given the number of submitted declarations such a scenario is more than real. ” says Vitaly Shabunin, Chairman of the Ant-corruption Action Centre. 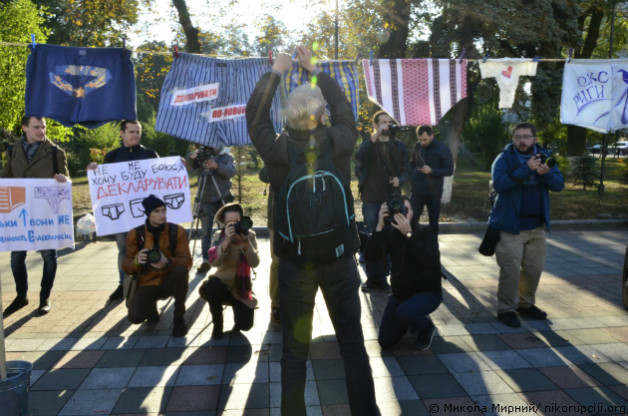 Among more than 10,000 submitted declarations available in the Register of Declarations most of them belong to judges (1500+), prosecutors (1000+) and mid-level officials such as heads of departments, their assistants and others. There are no declarations of mayors of regional centres of Ukraine, the Prosecutor General of Ukraine, the Director of National Anti-Corruption Bureau and the Head of the Specialized Anti-corruption Prosecution. Out of 15 members of the High Council of Justice, only one has submitted the declaration as well as only 4 officials from the Administration of the President. 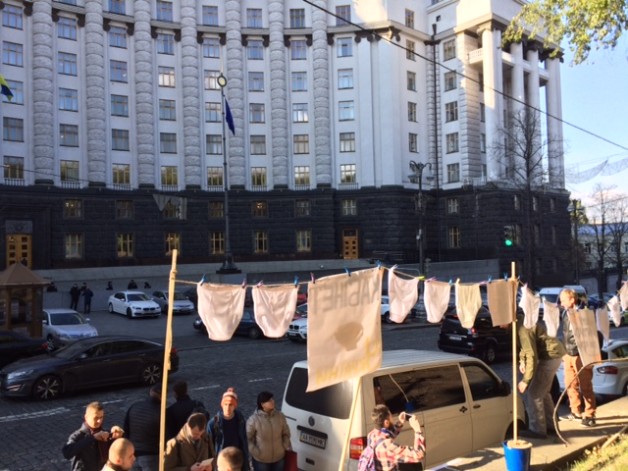 The final deadline for the submission of the declarations expires in less than 2 weeks. The activists emphasise that if all officials will rush to submit the declarations the very last day, the system may not survive and this is their main hope. “The responsibility for the smooth operation of the Register of Declarations belongs to the heads of National Agency for Prevention of Corruption  and State Special Communication Service,” says Alexander Lemenov, manager of Anti-Corruption initiative of the Reanimation Package of Reforms. “The management of these two authorities, including Natalia Korchak and Alexander Yevdochenko, must finally realise that blocking the normal functioning of e-declaration system can sustain criminal liability personally for them.”