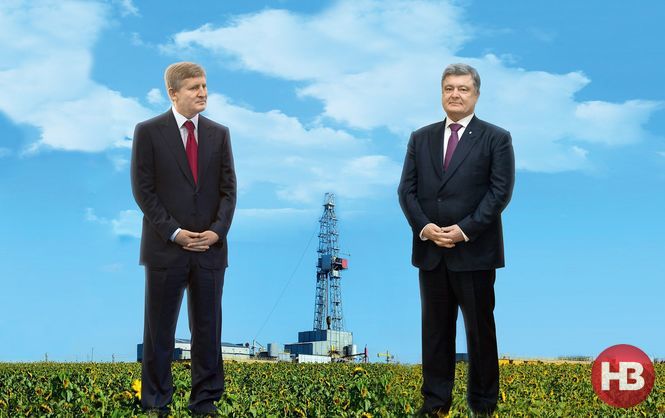 Controversial formula Rotterdam+ is not only a story about inflated coal price but also about how President gave possibility for earning to an Oligarch and received a compensation in return.

On February 3, 2012 Oleh Seminskyi, Head of the biggest private gas-producing company of the country “Naftogazvydobuvannia” (“NGV”) went out of the corporate office on Nyzniy Val street in Kyiv and disappeared.

Now, when he is finally free and started talking with NV, it turned out that his story has started the series of events which led to a contradictory formula Rotterdam + last April, and interests of top officials and the richest businessmen intertwined around “NGV”. As explained by MP from “Samopomich” party Viktoria Voytsitska, it is because of shares of this company, once lost by Petro Poroshenko, current President entered into agreement with its new owner – billionaire Rinat Akhmetov.

The result of agreements was emergence of formula Rotterdam+ in April last year, which became a matter of controversy among politicians and experts since that time. This formula allows power plants that run on coal to include price of energy source equal to its value in the Dutch port of Rotterdam, plus shipping to Ukrainian territory in the tariff.

Company DTEK owned by billionaire Rinat Akhmetov became the key beneficiary of Rotterdam+. Formula allowed DTEK to charge higher prices for electricity sold to State Enterprise “Energorynok” which in turn led to higher prices for end users. Because in reality DTEK uses its own coal, cost of extracting of which is much lower than the price of energy resource for Rotterdam formula. Margin which was created allowed Akhmetov’s structure to increase revenues by 20%.

DTEK can thank the State represented by National Energy and Utilities Regulatory Commission for this gift – the latter applied formula Rotterdam+.

Why National Commission was so favorable to Akhmetov – this question has been the subject of disputes which are lasting unsuccessfully for little over a year.

But now “NV” got new information which allows to clarify the situation: an unexpected witness Oleh Seminskyi started talking. In order to explain actions of the Commission he suggested “NV” to go back to the past.

Seminskyi’s car was blocked by three cars on a back street in a private sector, three strong guys in neck face masks jumped out of them. Introduced themselves as police, put Seminskyi on the ground, handcuffed him and thrown into one of their cars.

Later investigators of General Prosecutor’s Office who dealt with the kidnapping, found out that a snatch squad was leaded by Andrii Melnyk who was the Head of Handball Federation at that time. Operation was planned by Yuriy Ernyniak, Patron of Ukrainian Orthodox Church of Moscow Patriarchate also known under criminal nickname Moldavan and a man called Raphaiil Salavatov.

It was the beginning of captivity of “NGV” Head, which lasted for 3,5 years, and the first year and a half he was lying in a mask, handcuffed on the floor of a dark bathroom.

He was fed with porridge, sandwiches, and tea, frequently beaten, sometimes to the loss of consciousness.

As a result, Seminskyi, tall and stocky man lost weight from 106 to 62 kg.

Only in May 2015 attackers released the hostage, thrown him out of the car in the woods near one of the regional centers of Kyiv region. They forbid him to get up for 20 minutes and then fled, leaving him alone. “Seven minutes passed, and I opened the mask: the sun shines, ants are crawling on me – says Seminskyi. – I resurrected. This is my second birthday. “

Now he knows why he was сaptured: because of “NGV” shares.

Now company is controlled by Akhmetov who concentrated 75% of shares. But in the beginning, it was state owned and called “Ukrnaftogaztehnologii”.

In 1997 Mykola Rudkovskyi, representative of Socialist party who was the Head of JSC “Derzhinvest Ukrainy” (State investment company of Ukraine) excluded the company from a list of state assets, and became its key shareholder. At the same time, he gained support of Poroshenko, who was a businessman and a politician-beginner close to President Leonid Kuchma at that time, by passing on part of company’s shares to Poroshenko, says Seminskyi.

In 2001 “Nafrogazvydobuvannia” was created on the place of “Ukrnaftogaztehnologii” which owns large gas deposits in Poltava region with proven reserves of 20 billion cubic meters.

At that time Poroshenko decided to support Viktor Yuschenko and fell out of favor with the President Kutchma because of this. To play it safe Rudkovskyi re-registered the company and transferred equipment and mining licenses to a new legal entity. The place of Poroshenko among shareholders was taken by the representative of “Social-Democratic Party of Ukraine (united)” Nestor Shurfych, who brought his party boss Viktor Medvedchuk with him. The latter was the Head of Presidential Administration from 2002.

According to Seminskyi, who was invited to run “NGV” by Rudkovkyi, shares were divided as follows: 50% – Rudkovskyi, 50% – Shufrych. “At the same time, I had 10% in Rudkovskyi’s stake and Medvedchuk had 10% in Shufrych’s stake”, – ex-head of the company explains.

Several years ago, in an interview to “NV” Ihor Kononenko, MP of “Petro Poroshenko Block” and business partner of Poroshenko for years stated: in the beginning of 00s “NGV” was taken from Poroshenko’s group of companies “Ukrprominvest” using illegal takeover.

As a result, Seminskyi also lost shares: his 10% were not mentioned in official documents. And when in the beginning of 2004 he started to demand them, Rudkovkyi answered that in order to get patrontage they should be passed to Oleksandr Moroz who was a presidential candidate from Socialist party. Seminskyi was promised a place in the party list instead. But he did not get it in the end. And Moroz did not get ‘his’ stake.

From 2010 Seminskyi started to pay dividends to himself – 10% of net profit – in strict proportion with the shares he was claiming for.

Profit of “NGV” was growing and Rudkovskyi decided to sell it, according to the words of ex-CEO. The problem was in Seminskyi – he concentrated all business processes in his hands with a help of Shufrych.

Problem disappeared in the winter of 2012 when Seminskyi went out of work and met athletic guys in masks.

“I am 100% sure that Rudkovskyi is responsible for my kidnapping”, – says former prisoner.

Now Rudkovkyi fled the country and lives in France, according to “NV”.

In 2013 during the first year of Seminskyi’s imprisonment DTEK bought major part of “NGV” shares from Rudkovskyi and Shufrych and paid 125 million USD to each.

Later DTEK bought another 15% from Shufrych and increased its stake to 75%.

“NGV” is a good asset from business point of view. Extraction rises: in 2016, it was 1,6 billion cubic meters. Experts think that profit from sale of such amount could be around 200 million USD.

DTEK refused to answer about current financial indicators of the company on request of “NV”.

According to “NV” sources, Poroshenko was trying to regain the company stake – by shares or funds as early as in 2014. Such information also was in the statement of Oleksandr Onyschenko, accused of fraud by Ukrainian law enforcers. He also was engaged in gas production and was going to buy “NGV” shares.

In the end of autumn 2014 Poroshenko invited me for a talk and asked to find a reliable lawyer for the Minister of Ecology and Natural Resources position – he explains. – The main thing he wanted, – to create problems with licenses for “NGV” and force Akhmetov to negotiations in an appropriate manner.

Onyschenko states that he suggested Ihor Shevchenko to the President and he became Minister of Ecology in the second Governnment of Arseniy Yatseniuk.

Shevchenko in a conversation with “NV” confirmed that Onyschenko recommended him to the Head of the State.

According to current CEO of “NGV” Ihor Schurov, starting from 2014 his company went through a dozen of inspections and five searches from various authorities on suspicion of unlawful obtaining of permits for oil and gas production.

Onyschenko says that Poroshenko also wanted to appoint an inside man on the position of the Head of the State Service of Geology and Mineral Resources, which issues mining licenses. But Yatseniuk who had good relations with Donetsk billionaire (Akhmetov) resisted.

Shevchenko in his turn said that Yatseniuk was blocking searches in “NGV” using his people.

Because of seizure “NGV” accounts as a part of the investigation about Seminskyi’s kidnapping Akhmetov decided to listen to the suggestions of Poroshenko. “President right off the bat demanded that he should pay 200 million USD as a payoff” – continues Onyschenko, who allegedly was told about this episode by Poroshenko himself during one of the conversations.

In the middle of 2015 after Seminskyi was released he met with Shufrych, who was a minority shareholder of “NGV” at that time. He asked to sign a document that Seminskyi has no claims to the company in order to unblock the accounts, frozen by the court. He promised a compensation in return but never paid it.

NV” has a copy of the document. “I declare that the company has not committed any actions against me”, – as stated on behalf of Seminskyi who really signed this document.

And in January 2016 accounts of “NGV” were completely unfrozen by the court.

Victoria Voytsitska from “Samopomich” party who expressed active interest in the case of scandalous gas producer says: the closure of cases regarding the company is a direct result of Poroshenko and Akhmetov agreement.

While Kononenko previously stated to “NV”: Poroshenko is not going to regain control over “NGV”

According to several sources formula Rotterdam+ was invented to solve a number of Poroshenko’s claims to Akhmetov.

Andrii Herus, former member of National Energy and Utilities Regulatory Commission confirms that this scenario could be real. Voytsitska in turn is sure that Rotterdam+ was a part of agreements between Poroshenko and Akmetov about the fate of “NGV. “It was a set of requirements [from the President] and a set of agreements as a result”, – she noticed.

Formula is beneficial to both parties. Akhmetov got additional 20% of revenue, which is embedded in utility tariffs. And ICU investment company bought Eurobonds of DTEK right before the formula implementation, according to the data of “Nashi Hroshi” website.

This information was confirmed to the edition “Dzerkalo tyzhnia” by Maksym Tkachenko, CEO of DTEK. “According to our data company ICU bought DTEK bonds issued in 2013”, – he stated.

ICU has long and close connections with the President. Company was consulting the key business of Poroshenko – “Roshen” corporation. Among other, ICU was structuring the offshore part of this business on British Virgin Islands. Besides people from this company – Valeriya Hontareva, Dmytro Vovk, Volodymyr Demchyshyn – were holding high public positions.

ICU ignored the request of NV to provide more information about the operation. However, they did not deny its fact.

DTEK also did not reply to “NV” on this case. As well as Prosecutor General’s Office, which is dealing with kidnapping of Seminskyi. The process got stuck there: senior investigator Dmytro Sus responsible for the case was fired in April and the new one was not appointed yet.

Vitaliy Shabunin, head of Anti-Corruption Action Centre assured “NV” that Department of PGO responsible for investigation is supervised by Kononenko and an MP from Petro Poroshenko Block Oleksandr Hranovskyi, who is close to him.

Presidential press service also did not reply on the request of “NV” about the comment within the legally prescribed five days.

Meanwhile, DTEK securities has risen significantly after Rotterdam+ entered onto force. As market participants assume, the buyer had insider information because he bought Eurobonds and debts of Akhmetov’s company with par value of 500 million USD for only 200 million USD. Later these securities rose to 450 million USD which means increase from 40% to 90% of their par value. As a result, the net gain on this deal was 50 percentage points.