During Revolution of Dignity began to systematically work on blocking of western accounts, transactions and assets of state corrupt authorities responsible for the violation of the rights and freedoms of citizens, killing peaceful Euromaidan activists, financing of separatism and the outbreak of war in the East of Ukraine.

We have always been deeply convinced that the authoritarian regime of Viktor Yanukovych, and now – terrorist groups and militants, mercenaries are fed by his corrupt business assets that are laundered and legitimized by the international financial system, with a network of shell companies and professional intermediaries.

Our goal is to thoroughly describe the business interests and business schemes of officials who should be blocked from access to the international financial system and later – to return their criminally acquired assets back to the Ukrainian people.

Oleksandr Yankovych, a dentist by training, was born in Donetsk in 1973 and, is currently one of the wealthiest businessmen in Ukraine and the second richest person in Donetsk after Rinat Akhmetov. As of November 2013 Oleksandr Yanykovych’s assets are estimated by Forbes to total $510 million .

The exponential rise of Oleksandr Yanukovych’s business empire occured in 2010–2013, when his father held the post of President of Ukraine. Prior to 2010, Mr. Oleksandr Yanukovych owned only the Management Assets Corporation, LLC (MAK, LLC) with a statutory capital of 55 million UAH (less than $7 million). 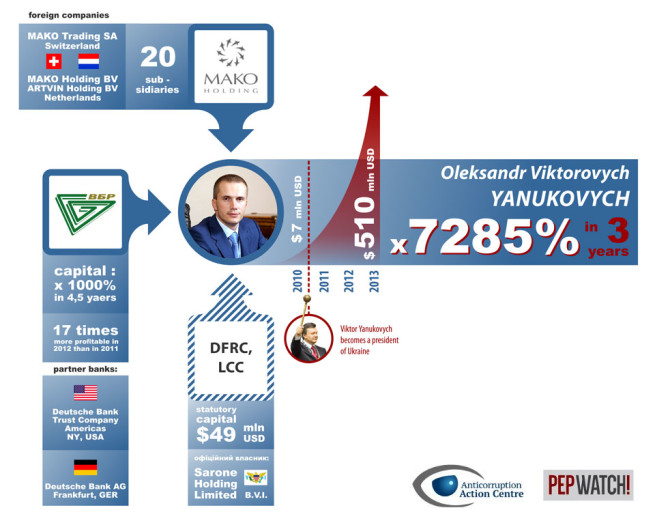 CJSC Ukrainian Bank of Development was founded on April 23, 2009 by Donsnabtara LLC, with a statutory capital of 80 million UAH.

Donsnabtara LLC, which was founded in 1995, was at the time headed by Mrs. Valentyna Arbuzova, mother of the incumbent Vice Prime Minister of Ukraine.

Since January 27, 2011 Oleksandr Yanukovych has aquired 100% ownership over the statutory capital of UBD. This happened fewer than two months after Serhey Arbuzov, a close friend of Mr. Oleksand Yanukovych, was appointed head of the National Bank of Ukraine. The mother of Mr. Serhey Arbuzov, Mrs. Valentyna Arbuzova has served as Head of the Executive Board of UBD since its creation.

Since its establishment in April 2009, UBD has increased its capital 10 times over. In 2013, UBD doubled its capital over the previous year. Interestingly, on December 24, 2012, Mr. Serhey Arbuzov, a son of head of UBD Mrs. Arbuzova, became the First Vice Prime-Minister of Ukraine.
The chronology of UBD’s capital growth: 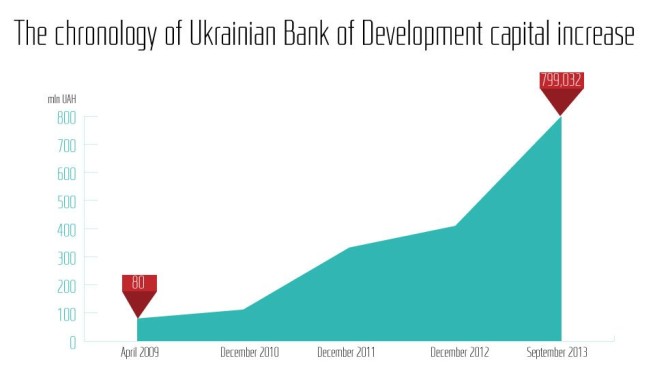 It is unclear what the origin is of the hundreds millions of cash invested by Oleksandr Yanukovych into his bank over the last three years. It could perhaps be from activities of Mako Holding, which are described below.

The closeness of Mr. Oleksander Yanukovych to the President of Ukraine allowed UBD to get an array of extremely profitable contracts in 2010–2013 to serve and credit state institutions. 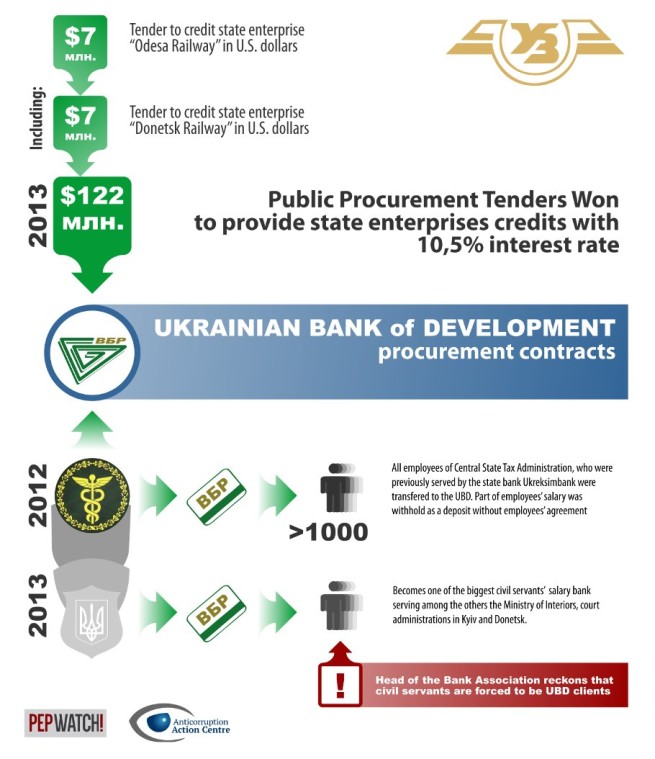 In February 2012, all employees of the central department of the Tax Service of Ukraine stopped receiving their salaries via the state-owned Ukreximbank and began receiving them via the relatively new UBD.

The head of the Tax Service of Ukraine, Mr. Klymenko, is known to be a good friend of Mr. Oleksandr Yanukovych and Mr. Arbuzov, the latter who at that time was head of the National Bank of Ukraine.

Each of the more than one thousand employees of the Tax Service received a «salary card» and a «deposit card» at the UBD. Each employee receiving their salary on a«salary card», had a fixed amount of their salary transferred to deposit card. The employee had no choice about the transfer of the funds to the deposit card. In 2013 UBD became one of several banks receiving a large portion of the «salary projects» for government employees, including those at the Ministry of the Interior and, court administrations in Kyiv and Donetsk.

According to the Head of the Association of Ukrainian Banks, civil servants are forced to use the services of UBD by imposition.

In 2013 UBD won a series of public procurement contracts to provide credit to state-owned railway enterprises totaling 978 million UAH. In particular, on November 14, 2013, the state-owned Odesa Railway signed a contract with UBD to receive a line of credit in U.S. dollars of 55,61 mln UAH with a 10.5% interest rate.

On November 8, 2013 the Donetsk railway signed a similar contract with UBD to receive a credit line for 55,64 million UAH.

UBD serves Mako Holding company and its subsidiaries, which are either controlled or belong to Mr. Oleksandr Yanukovych.

UBD uses the following intermediary banks for transfers in USD and Euros:

Mako Holding is the parent company of about 20 spectacularly successful companies in Ukraine, the Netherlands and Switzerland, most of which significantly expanded in 2010–2013, during the presidency of Mr. Viktor Yanukovych. 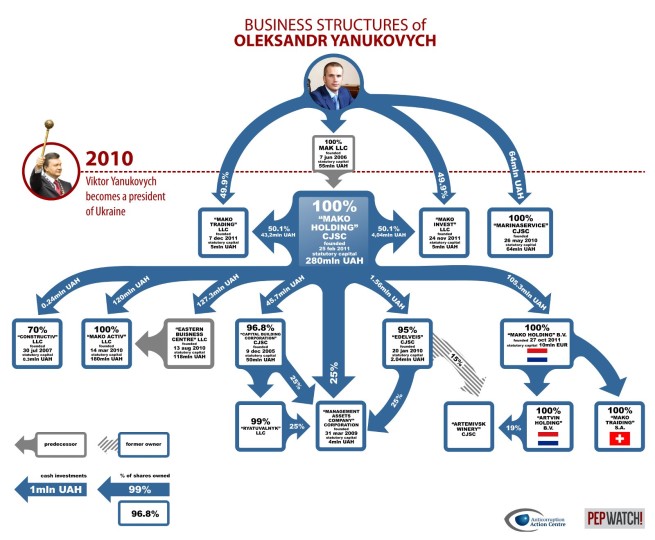 Oleksandr Yanukovych is the sole owner of Mako Holding CJSC, which was established on February 25, 2011 with statutory capital of 55 million UAH. The company is the successor of the now defunct MAK LLC. MAK LLC was registered on June 7, 2006 and was wholly owned by Oleksandr Yanukovych.

Once established in 2011 Mako Holding had a negative profit on its balance sheet. In a year the company showed an official net profit totaling 197 million UAH.

On November 22, 2011 Mako Holding issued an additional 450 000 shares with a total value of 225 million UAH. In January 2012 Mr. Oleksandr Yanukovych officially purchased all of this stock with cash.

Mako Holding is the parent company of a series of energy, coal and development companies, which significantly expanded in 2011–2013, specifically:

Edelveis since 2011 has 25% shares of Corporation Management Assets Company.

Architecture-Engineering Company Constructiv LLC was registered in 2010. Mako Holding owns 70% shares of the company; in 2012 Mako Holding invested 248,200 UAH in the company.

In 2010 Marinaservice bought four historical buildings in Balaklava Bay and received from the Ministry of Transportation an open-ended lease of hydro-technical facilities.

In 2011 the company bought floating pantones, wave-breakers, administrative buildings and two apartment buildings. In total, all of the buildings in Balaklava Bay costMarinaservice 54,6 million of UAH.

In 2010 the Minisrty of Defence of Ukraine allowed the privatization of 8.4 hectares of land belonging to ship yard Metalist near Balaklava Bay and 1.8 hectar of Cape Aya, which were leased by Marinaservice.

While UBD, Mako Holding and Mako Holding’s subsidiaries officially belong to the business empire of Mr. Oleksandr Yanukovych, there remain a number of corporate structures with no direct legal ownership links to the son of Viktor Yanukovych.

The Association Donbass Rozrakhunkovo-Finansovyi Centre (DFRC) was established in 1997 and until 2010 was controlled by Eduard Prutnik, an MP from the Party of Regions and close friend of Mr. Viktor Yanukovych.

In June 2012 the Association was reorganized into the Public Joint Stock Company Central Enrichment Factory Comsomolska, the ownership of which is divided between 3 companies:

Since November 26, 2013 DRFC LLChas bought all the shares which previously belonged to the other parties.

In turn, DRFC LLC officially belongs to Sarone Holdings Limited, a company registered in BVI, where the beneficial owner is hidden.
According to a number of journalistic investigations Mr. Oleksandr Yanukovych has controlled the company since 2010.

Enrichment of excavated coal improves its quality and often coal-mines work with enrichment factories, each of which enriches an average of 2–2.5 million tons of coal per year.

In November 2012 the Ministry of Energy and Coal Mining contested the privatizations, claiming that it was illegal to issue more than 50% of state-owned factories’ shares to a private company DFRC. The commercial court in Donetsk, however, issued a decision in favor of DFRC,relying on changes in legislation adopted in March 2012, a few months before the privatization by legislative initiative of the President Viktor Yanukovych.

DFRC has been actively buying coal from so-called «little mines» or «coal pits». According to the data of the Ministry of Energy and Coal, at least 9 mln tons of coal are produced at coal pits, which neither have safe working conditions nor provide social benefits to miners. The coal from pits is cheaper and can be purchased for 300–400 UAH per ton, versus what the regular coal mines sell for 800–1000 UAH per ton. Taking into consideration that DFRC sells its coal to the electric stations for 925 UAH per ton, the difference in is a pure profit for DFRC, which when combined with heavy state subsidies enables DFRC to be one of the leading companies in the coal business in Ukraine.

According to journalistic investigations conducted since April 2012 Mako Trading is acting as a guarantor of export operations conducted by the Chervona Zirka coal enrichment factory, which belongs to DRFC. During the first quarter of 2013 Chervona Zirka exported about 4300 tons of coal to Poland and the Czech Republic at a price of 820 UAH per ton.

Finally, there is one more company called LE MARE, LLC, which could be included in the list of the Yanukovychs’ business structures. Olena Yanukovych, the wife of Oleksandr Yanukovych, is owner of the company with 20 mln UAH of statutory capital. The company allegedlyowns  a luxurious fitness centre in Donetsk called  LE-MAREE.