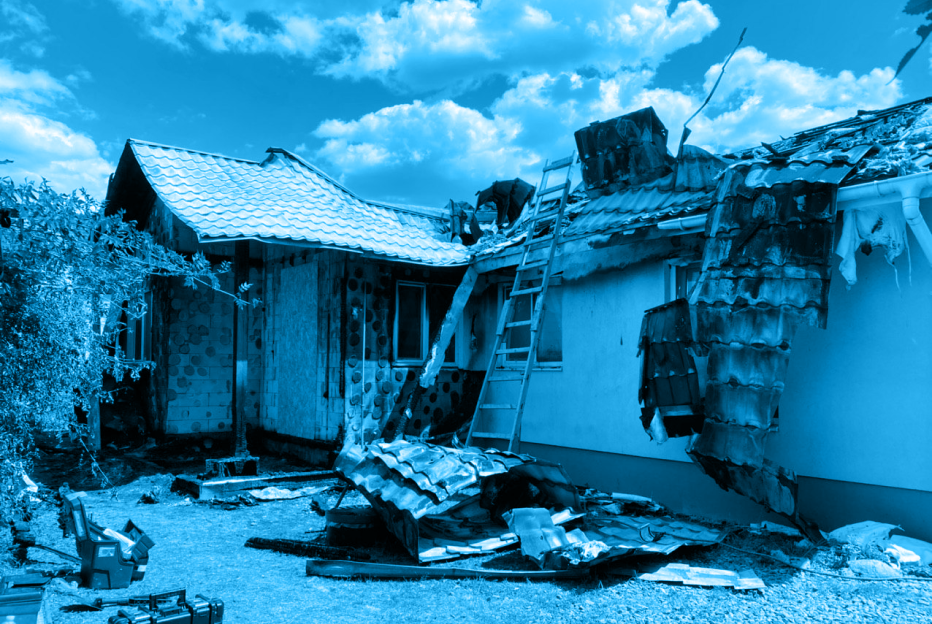 On the night of July 23, 2020, there was an explosion in the house of Anti-Corruption Action Center Chairman Vitalii Shabunin who lives in Kyiv. After the explosion, his house caught fire. Fortunately, no one was injured: Vitalii and his children were not at home at the time, and the parents managed to run outside the building.

Right after the explosion, Shabunin declared that it was a planned attack because all the equipment in his house worked properly. The activist stated that two weeks before the incident, the gas service had checked the meter and all connections and did not find any technical problems.

Vitalii Shabunin and other representatives of the Anti-Corruption Action Center have been subjected to systematic harassment in recent years, including physical assault, fabricated criminal cases, and smear campaigns.

On March 22, 2016, the Pecherskyi District Court of Kyiv City granted investigators of the Prosecutor General’s Office the right to seize the possessions and documents of the Anti-Corruption Action Center, including information subject to bank secrecy. PGO investigators allegedly investigated the embezzlement of funds allocated by the US government and European partners to reform the Prosecutor’s Office.

In September 2016, Vitalii Shabunin reported being a target of illegal surveillance and publication of photos of his unfinished house on the Internet as well as publication of the data on financial transactions on the account of Anti-Corruption Action Center. The activist appealed to law enforcement officers with a statement about illegal surveillance and leak of information but received no adequate response.

On April 9, 2017, picketing took place near Vitalii Shabunin’s house, the purpose of which was to put pressure the activist and discredit him. The Security Service of Ukraine was involved in organizing the picketing.

On May 11, 2017, Oleksandra Ustinova, an employee of the Anti-Corruption Action Center, stated that she underwent surveillance by people who were making a film about her at the request of the Security Service of Ukraine to discredit her.

On June 9, 2017, the Investigative Department of the Fiscal Service in Kyiv instituted criminal proceedings against the leaders of the Anti-Corruption Action Center for alleged tax evasion by the organization, at the request of MP Pavlo Pynzenyk.

Another criminal case was opened against Vitalii Shabunin himself as a result of an incident on June 8 near the military registration and enlistment office, after which the activist was suspected of “inflicting bodily harm on journalist Filimonenko while the journalist was performing his lawful professional activities.” Later, the Boryspil District Prosecutor’s Office opened criminal proceedings against Oleksandra Ustinova, a board member of the Anti-Corruption Action Center, on charges of obstructing journalist activities.

On July 17, 2018, Vitalii Shabunin was attacked near the building of the Specialized Anti-Corruption Prosecutor’s Office in Kyiv. The participants of the counter-action, a group of young people in camouflage uniforms, poured green iodine and threw cakes at Vitalii Shabunin, who organized the rally of anti-corruption activists.

Even with these attacks and ongoing criminal cases, some media outlets that systematically disregard journalism standards and social networks have been running a dirty smear campaign against the Anti-Corruption Action Center and Vitalii Shabunin in recent years to undermine the credibility of anti-corruption activists.

We are forced to say that Ukraine remains a dangerous country for civic activists and human rights defenders. Moreover, its active citizens, who are trying to promote reforms and fight corruption, are often forced to pay with their safety, health and even lives, as happened with Kateryna Handziuk.

Taking into account all the facts, we, representatives of civil society organizations, demand:

– the National Police and the Prosecutor’s Office:

– the Temporary Commission of Inquiry of the Verkhovna Rada of Ukraine to exercise parliamentary control over the investigation of the attacks against Kateryna Handziuk and other public activists:

– the President of Ukraine Volodymyr Zelensky:

– the Verkhovna Rada of Ukraine and the President of Ukraine:

18. Center of Development and Democracy CSO