Home Новини Shabunin: the detention of a family member of AntAC lawyer is not related to our watchdogging

Yesterday’s detention of the AntAC chief lawyer’s husband is not related with AntAC professional activity, nor with AntAC lawyer’s activity as attorney.

“The video of the incident, released today by the Police, clearly shows that the policemen acted in accordance with the instructions”. Such a statement was made by Vitaliy Shabunin, AntAC Chairman of the Board, after the police released a video and pictures of yesterday’s incident. 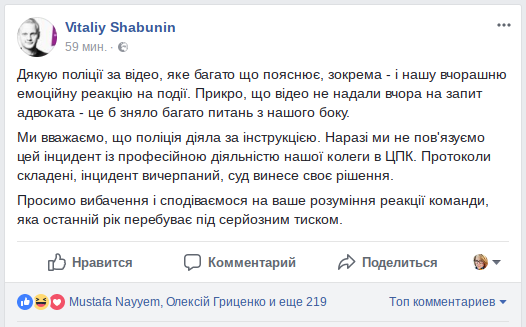 “Our colleague’s husband received a report on the administrative violation, the case is transferred to the court”, added Shabunin. AntAC yesterday’s decision to immediately inform public about the case was caused by the​ following​ ​reasons:

In addition, t​ax administration’s criminal case against AntAC questioning NGO’s non-profit status was recently ​revived and ​sent to ​the ​regional court after Kyiv court refused to give the permission to the prosecution on tax​ check. ​We see no reasonable grounds for such a choice of the court, since the NGO is registered in Kyiv, and our activity is held here.

To conclude – ​this is a private case of our chief lawyer Olena Shcherban, not related to her professional activity. As it is seen on the published videos, police officers acted in accordance to their instructions.

We are sorry for having overreacted, which is caused by the constant pressure AntAC and its team members are facing.

We thank everyone for the attention to this case and immediate support.

150 of Triggered Investigations, Edu Centre and First in Ukraine Politically Exposed Persons Register – AntAC Reports on its Years of Work