The notice of suspicion was changed on January 15 and today, on January 18 was handed by the Dniprovskyi police district investigator O.Cheberyak. According to him, pre-trial investigation is finished and a restraint measure for Shabunin will not be chosen. The case will be sent to court soon. 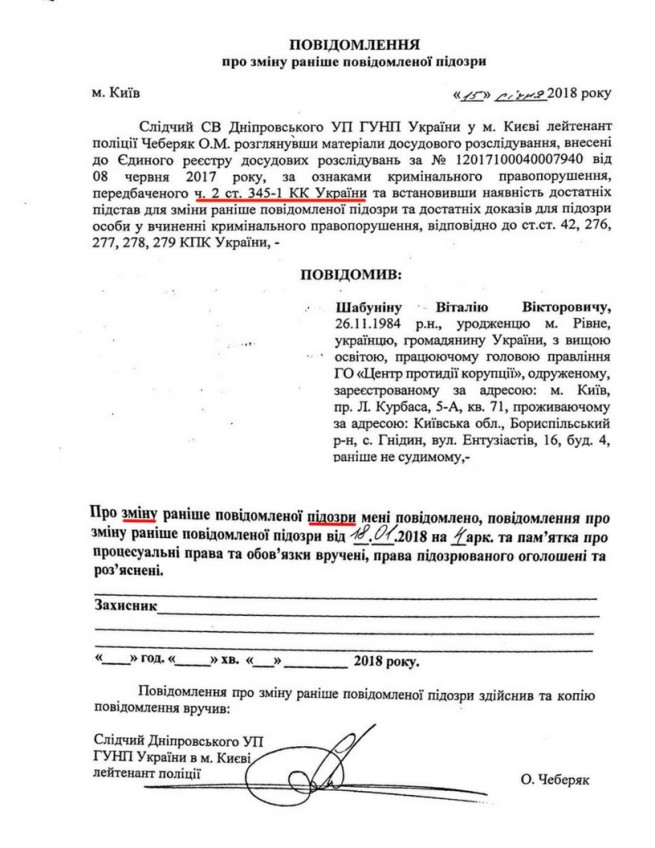 “The decision of investigators and prosecutors not to choose a pre-trial restraint measure means that the person is not evading investigation and does not pose any threat to the society. This does not correlate with the crime incriminated to Shabunin” – says Daria Kaleniuk, CEO of Antac and lawyer. – “This gives additional grounds to conclude that the case is political”.

AntAC considers re-qualification of the case as continuation of the pressure exerted over organization.

The investigators tried to incriminate Shabunin of the same crime in summer, but changed their mind overnight. “As far as we are informed, no new evidences appeared in the case that would confirm that an insult of a journalist took place. Therefore we consider that there is a purely political motivation for this re-qualification”.

No new evidences appeared in the case that would confirm that an insult of a journalist took place. Therefore we consider that there is a purely political motivation for this re-qualification

Pre-trial investigation in the case against Shabunin has been lasting for more than half a year already. Due to “special complexity” the case involves nine investigators. For four times investigators prolonged the terms of investigation.

In the course of the court hearing back in August, it came up that the prosecutor’s documents contained a number of mismatches – all three witnesses’ testimonies were copy-pasted, medical examination conclusion, based on which a notice of suspicion was made, contains inaccurate and false information.

Thus, Shabunin punched Filimonenko in the right side of the face, but according to medical examination it was the left side that was broken. Filimonenko was hospitalised on June 8. For 12 days, by June 19 the MRI showed no signs of any problems, and only on June 20 the fracture appeared.

In order to initiate a proceeding for falsification of the medical examination Shabunin’s attorneys went to court. Prosecutor’s office first refused to open the case upon falsification; so far, the case is lying in the Podiskyi district police office, but since November no procedural actions have been taken.

In the meantime, investigations in other cases on attacking journalists or preventing their professional activity are left fruitless – only a few of them made it to the court. After the Revolution of Dignity, there were only three verdicts in the cases with the same article as incriminated to Shabunin, two of them were plea bargain.

The incident between Shabunin and Filimonenko, the assistant to a Radical Party MP Melnychuk, occurred on June 8, 2017 near Dnipro Military Commissariat of Kyiv. Filimonenko names himself the journalist, but he is known for creating provocatory videos, not journalistic investigations.

As it is seen on the video, Filimonenko provoked Shabunin and the latter punched him for harassing Shabunin’s colleague. After taking a punch the ‘victim’ was chasing Shabunin for about an hour, spraying him with a pepper spray, and refused to go to the emergency when the first ambulance arrived.

On August 16 Shabunin was served a notice of suspicion. If his ‘guilt’ is proved, Shabunin will face 5 years of detention.

“I am ready to hold responsibility for punching Filimonenko” – says Shabunin. – “But Filimonenko is not a journalist. And the collected evidences, specifically medical examination results, were falsified. This confirms that criminal case has nothing to do with the punch – it is a revenge for our anticorruption activity”.