Home Новини A Simple Recipe for Tackling Corruption in Ukraine

A Simple Recipe for Tackling Corruption in Ukraine 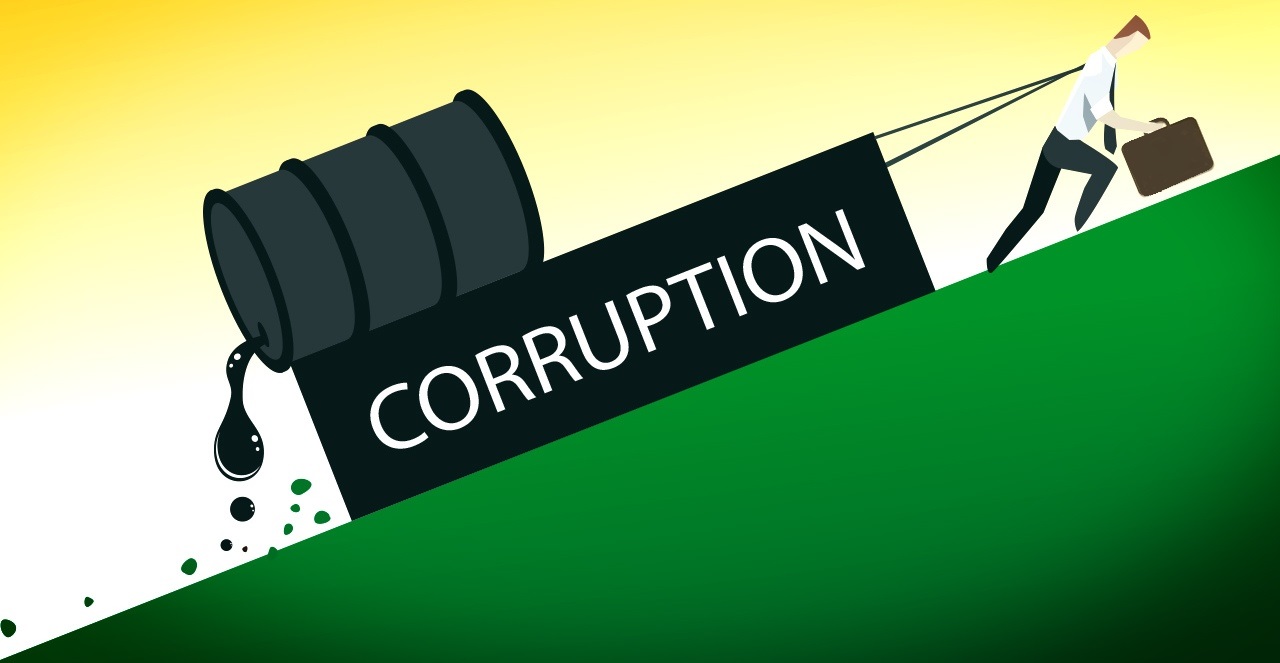 There is a simple solution to tackling corruption in Ukraine.

It is based on three pillars: one independent law enforcement anti-corruption agency, maximum disclosure of information available to the state, and strengthening internal anti-corruption expertise.

All three pillars are of equal importance and shall be developed simultaneously. Good news – these processes have already kicked off in Ukraine; however, they shall be brought to their logical completion.

Ukraine has changed after the “EuroMaydan”, but it still has features of a “captured state”, where a group or several groups of related persons control key state institutions and get access to public funds and the largest domestic resources.

Closed cycle of large-scale political corruption, whereby several oligarchic business elites “invest” illegally obtained assets (mainly “black” cash) into elections at all levels and into political players in order to exercise control over future decisions of high-level officials, is still operating in Ukraine. The latter, in their turn, facilitate generation and multiplication of capital of “investor”/oligarchs through their discriminatory and corrupted decisions.

A precondition of thriving of large-scale political corruption is impunity of high-level officials. At the same time, a real risk of facing a jail term and losing illegally acquired assets is the best motivation for officials not to steal or abuse their position or connections for personal gain. Collapse of law enforcement and judicial system used for decades by high-ranking political elites to conceal corruption crimes instead of investigating them is a main prerequisite for impunity.

To convict corrupted high-level officials in power and to recover their ill-gotten assets is a task for the National Anti-Corruption Bureau of Ukraine. Why to have a new law enforcement authority, if existing structures may be reformed?

The fact is that there is no law enforcement system in its ‘classical’ sense in Ukraine.

That which does not exist cannot be reformed. There are only remnants of a system that over years has been transformed into a mechanism of corruption and an instrument to conceal embezzlement of public resources by political pseudo-elites. Law enforcement and judicial system pushed out honest professionals who resisted the rules of the game in which criminal cases could be initiated and/or dropped for money.

Prosecutor’s office as an example of pseudo-institution

Victor Pshonka, former Prosecutor-General of Yanukovych, concealed multi-billion embezzlement of the state by former President and his close associates.

Vitaliy Yarema, the Prosecutor-General of the era of the new President of Ukraine, Petro Poroshenko, did not bring to court any single criminal case against former Ukrainian officials enlisted in the EU sanctions list.

Moreover, persons close to Yanukovych returned to power. For instance, Serhiy Klyuyev has been listed in the EU sanctions list since a year, but is not prosecuted by the prosecutor’s office in Ukraine. Already in November 2014, he was re-elected to Ukrainian parliament and received then efficient instrument of protection – deputy’s immunity. The same could have happened with Yuriy Ivaniushchenko, one of the closest associates of Yanukovych, had the public not whooped things up over lack of criminal proceedings against him.

Since the prosecutor’s office is not able to bring to court apparent economic crimes of former high-level officials, the Ukrainian public loses hope of law enforcement bodies investigating crimes of high-level officials now in power, and faith that a more just society can be build. Being aware of this, in January 2015, MPs of Parliamentary Committee on Tackling Corruption and Organized Crime initiated collection of signatures for a vote of no confidence vis-a-vis the Prosecutor-General. As a result, Vitaliy Yarema left his office. However, replacement of the Head of the Prosecutor General`s Office of Ukraine does not automatically turn on mechanisms of uninterrupted operation of the prosecutor’s office and reforms of the law enforcement system.

The National Anti-Corruption Bureau (NAB), the director of which is to be selected by the Selection Commission, consisting of known public figures and professionals, should trigger the right processes and reactions in the the law enforcement system. NAB will have powers to investigate corruption crimes of high-level officials in power and should differ among other existing law enforcement bodies by high standards of independence from political influence.

With its very first investigations of financial crimes, Bureau, like a litmus test, can clearly detect what exactly is not functioning in the post-Soviet criminal justice system and what shall be changed to hold responsible corrupt senior state officials.

To make NAB qualitatively new, elite and professional law enforcement authority, international donors of Ukraine and experts shall unite with civil society and media and obtain maximum guarantees of the Bureau’s and its Director’s independence.

High salaries of the NAB’s employees prescribed in a law constitute a strong guarantee of independence of investigators and search operations officers of a new law enforcement authority. Transparent competition for selection of a Director should guarantee that the NAB will be headed by an impartial professional ready to set up new and equal rules of the game .

International community could join the process of elaboration and implementation of such rules from the very first days of the Bureau’s operation and assist it by:

From the first days of its operation, the international element should be strongly embedded into the work of Bureau. Cooperation agreements shall be signed and personal contacts shall be set between the NAB and partner law enforcement institutions from the EU member-states, USA, Canada, etc. It would be important to set up cooperation with upcoming Ukrainian-European investigation group with the authority to conduct criminal investigations of the use of the EU financial aid. Last year, European Commission presented an initiative of creation of such a joint investigating body. Joint operation of the NAB with such a group could become an additional guarantee of the NAB’s independence and strengthen financial investigations capacity of the new staff.

Finally, the Bureau has to achieve important objectives – to implement new approaches to investigation of financial crimes committed by high-level officials, to restore people’s faith in law enforcement system and to re-establish values of honor and dignity of employees of the law enforcement authorities.

First convictions of high-level corrupt officials and forfeiture of their ill-gotten assets, as effective results of NAB activity, will start rapid clean up and real reform of the entire law enforcement and judicial system of Ukraine.

Disclosure of information available to the State. What for?

If a citizen becomes aware of corruption and embezzlement of budget funds, he/she would rather pass the information to trusted journalists than to the prosecutor’s office.

Fact-based analytical media publication revealing corrupt conducts, if professionally done, has a positive impact: a contract may be terminated, corrupt official in power may be dismissed or a scheme of non-transparent distribution of natural resources may be halted. While official criminal investigation posses now lower risks for perpetrators engaged in large-scale corruption: it is a common practice to “negotiate” with the prosecutor’s office closing the proceeding, win a case in a court, or “kill” it at the stage of court order execution, which may be postponed for years not affecting corrupt practices.

Maximum access to information possessed by the state is a key prerequisite for high-quality anti-corruption investigations conducted by journalists and NGOs.

For this reason there is ongoing campaign for disclosure of information allowing to collect facts on income and expenses of the state and officials. Crucially important are information and documents concerning public procurement, registers of legal entities and their beneficiary owners, owners of immovable property and land plots, financial reports of public joint stock companies, officials’ income and expense statements, court decisions and materials, expenditures of state institutions and organizations.

A number of positive legislative changes took place in this regards within the last year; yet, it is still a challenge to implement them properly.

Disclosed data shall be presented in a format convenient for further analysis and comparison, public records and resource portals shall be updated regularly and contain reliable information/documents, including the history of revisions.

International donors could assist both the authorities and civil society in opening the state data and educating thousands active citizens interested to control the state on how open data can become a powerful instrument to tackle corruption. 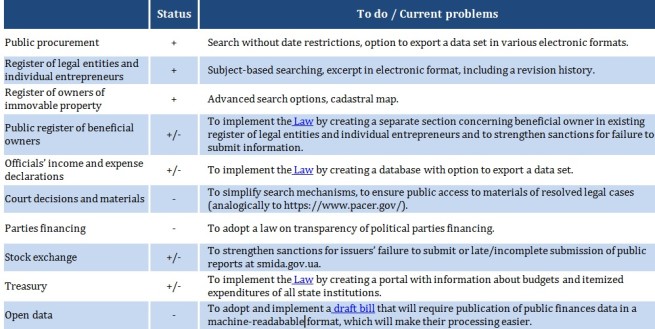 In Ukraine, there is an urgent need not only for efficient anti-corruption measures, but also for Ukrainian professionals who could develop and implement such measures.

A recent tendency for foreigners to take the highest positions in the Government and law enforcement bodies emphasizes the urgentneed to invest in training of Ukrainian anti-corruption experts and development of applied anti-corruption research.

This concerns both government employees, as well as representatives of civil society organizations. A comprehensive package of progressive anti-corruption laws has been adopted, however, only a few Ukrainian experts understand how these laws shall be implemented and what their results shall be.

National Anti-Corruption Bureau (investigating agency) and National Agency for Prevention of Corruption (preventing agency) are being created, but there is not a single professional training program that would prepare investigators, analytics and experts to work in these structures.

Important state information resources became public, but these open data will become a powerful anti-corruption instrument only when hundreds and thousands of active citizens all over Ukraine will learn how to search and analyze this information and use it in public pressure campaigns. International donors and organizations have deployed many experts and advisors who should satisfy demand for anti-corruption expertise to Ukraine, but the problem is that there is no universal anti-corruption tool suitable for all countries. In Ukraine, corruption has its deep specificity caused by difficult post-Soviet economic, cultural and political processes and peculiarities of legal framework.

Many international organizations and development agencies are eager to assist Ukraine in tackling corruption. However, deploying missions of external advisors and experts only treats symptoms of the disease, not its causes. Development of sustainable institutions is necessary in order to create in a long-term perspective domestic anti-corruption expertise in Ukraine.

This could be done, for example, by setting up an anti-corruption educational and research center based at progressive Ukrainian university or universities. By involving international specialists and leading Ukrainian experts, such a Center would offer short-term and long-term inter-disciplinary educational programs making it possible to train new generation of Ukrainian professionals in the field of anti-corruption.

Experts of the Center would run high-quality interdisciplinary training programs and conduct research for best solutions towards good governance and political accountability in Ukraine. Creation of such a Center does not require large resources, is cheaper than missions of foreign advisers and experts, and will have long-term sustainable anti-corruption impact on Ukraine.