The Truth Behind Lazarenko’s Assets Recovery

On November 4, present year, a UK-based law firm Lawrence Graham LLP spread a press-release informing that Ministry of Revenue and Duties of Ukraine “has begun legal process in the United States of America and in Switzerland in relation to over US$200 million, which is believed to have been misappropriated by persons including the two former Ukrainian Prime Ministers, Yulia Tymoshenko and Pavlo Lazarenko”.

Interestingly, the information was published only on the website of the British lawyers. Neither the agency headed by Oleksandr Klymenko — the ordering customer, nor the Government Portal, nor the Ministry of Foreign Affairs of Ukraine, as of yesterday, published any official information about initiating such an important case.

At the same time, a number of Ukrainian media, notwithstanding the press-release and without presenting any references, stated to spread information that Azarov’s government intends to recover the assets thieved by Pavlo Lazarenko, a former prime minister of Ukraine. These messages indicate a sum that differs from that announced by Lawrence Graham LLP, namely 4,1 bln hryvnias, which approximates 504 mln US dollars.

Such mismatches encountered in the announcements of the «sources in the cabinet» and the lawyers hired for this case give reasons for speaking about speculations over the issue of Lazarenko’s assets recovery and new political designs that arise as we approach the signing of the Association Agreement between Ukraine and the EU.

How did the number of 4,1 bln hryvnias appear? Does the government really want to return the thieved money to the people of Ukraine? Why do some political consultants claim that these events will affect the signing of the Association Agreement between Ukraine and the EU to be held in November, in Vilnius?

Ukrayinska Pravda has previously published information about the assets of Lazarenko: their current location, origins, and the persons and groups that presently claim the money. The diagram based on the claims for Lazarenko’s assets seizure, which was brought by the U.S. Department of Justice to United States District Court for the District of Columbia on June 30, 2005, implies that the sum of 504 mln US dollars was pulled out of a hat.

At present, the governments of the USA, Switzerland, Lichtenstein, Antigua, Guernsey and Lithuania have identified and frozen approximately 250 mln dollars. The U.S. Department of Justice has been attempting to reсщмук the assets by means of a trial in Washington, D.C. since 9 years. This process is not connected to a criminal case in California that convicted Lazarenko for money laundering and inflicted a penalty of 22 million dollars and seizure of a mansion.

Thus, these are the only assets figuring in the Lazarenko case that were frozen by the US government on the accounts in 5 countries of the world. Also, they are the only funds available for recovery.

Recently, the Court of California made an order that allows the US government to sell the Lazarenko’s house.

Within several months the villa in Novato Lazarenko bought for 6.8 mln dollars will be sold, and the revenue will go to the U.S. Department of the Treasury.

This will be the first sum that Ukraine has chances to return (find more details in this regard in the following publications).

How does the Ukrainian government manipulate the money recovery?

Thus, in case the firm would return at least a half of the money seized by the US government, which is 125 mln dollars, the lawyers’ revenue would make at least 15 mln.

UTICo did not return the money, but counted the percent promised in the contract in their discretion and tried to adjudge it at Washington, D.C. and California courts. The appeals of UTICo were hampering the decision to sell the villa in Novato and blocked the judgment in the 250 mln seizure case in Washington, D.C..

But finally the court concluded that UTICo has no legal reasons to claim the assets of Pavlo Lazarenko.

Later on, US and Ukrainian courts passed a series of verdicts that UTICo even had no right to represent the people of Ukraine in the case of Lazarenko’s assets recovery, even though the Prosecutor General’s office of Ukraine entitled them with such a right. Later this was also confirmed by the the Ministry of Justice of Ukraine (letters dd. July 23, 2010, №39-41.934 and September 21, 2010).

Apart from the involvement of UTICo, there were no other attempts to recover the Lazarenko’s money to Ukraine in the course of 15 years.

Lawrence Graham instead of UTICо?

How did the government reason the situation this time, when it was hiring expensive foreign lawyers for assisting the recovery of the Lazarenko’s assets to Ukraine? Do they really follow the interests of the Ukrainian citizens?

The case of UTICо indicates that the services of Lawrence Graham will cost Ukrainian taxpayers a bundle.

It is not likely that the lawyers from Lawrence Graham will persuade the U.S. Department of Justice to return 250 mln and the money received from selling the mansion to the empty Ukrainian budget.

The administration of Obama claimed that it is necessary to return the seized corrupt property directly to the harmed nations, but not to their corrupt governments.

Moreover, the court trials concerning the Lazarenko case cost the USA much time and money, so it would be absurd to expect the return of the ex-prime minister’s assets to the budget of the present corrupt Ukrainian government at cost of the American taxpayers.

Also, the prospect of returning the seized corrupt funds back to the corrupt kleptocratic governments is criticizedinternationally. Particularly, it is critisized by the government of Switzerland that allegedly according media announcements expects to receive the claims of the Ministry of Revenue and Duties of Ukraine concerning the seizure and the recovery of the Lazarenko’s assets to Ukraine.

This idea is shared by Linda Candler, the head of the California-based law firm Offshore Investigations and a member of the Board of Directors at the International Association for Asset Recovery: “The US forfeiture case has been pending since 2004 and it is still not resolved. The reason for the delay is because numerous third parties have filed claims to the sized funds. These third-party claimants include Pavlo Lazarenko, filing on his behalf and on behalf of his children; the Liquidators of Eurofed Bank of Antigua; Gazprom; and UTICo. The Department of Justice has opposed the claims of these third parties, and has been successful in having many of them dismissed. This case should not be allowed to take nearly 20 years, as the Marcos case did, before the various third-party claims are resolved. The victimized nations have the right to repatriation of assets stolen by corrupt kleptocrats to be further used for effective social projects, such as for medical treatment of people with hard diseases or for education of children from low-income families. Meanwhile, it is not acceptable to recover these assets back to the hands of those who cannot guarantee the effective and transparent usage of these assets.” 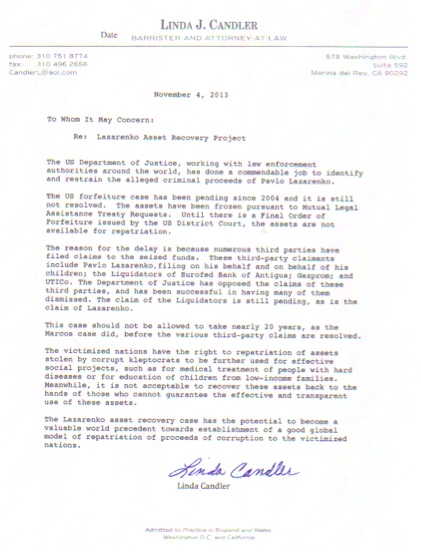 How the government should act?

In order to repatriate the Lazarenko’s assets to the national budget, the Ukrainian government should either file a claim to the U.S. District Court in Washington, or officially appeal to the U.S. Department of Justice.

In the former case the Ukrainian government seriously risks to hamper the date of verdict on forfeiture and final recovery of the Lazarenko’s money.

The money on the accounts in the other five countries is frozen based on the official appeals of the U.S. Government filed within the framework of Mutual Legal Assistance Treaties. This money cannot be returned to Ukraine until the Final Order of Forfeiture, which can appear only after all third-party claims to be resolved.

What can the public do?

There is a possibility to create an independent foundation in Ukraine, which can become an alternative way of recovering the Lazarenko’s assets. This fund can be governed by a selective international Steering Committee, which would guarantee that the recovered assets are used efficiently and transparently.

The government of the United States already has a similar precedent. In 2007, 84 mln dollars received from an American company for bribing the Kazakh government, were transferred to a newly created independent “BOTA” foundation.

Currently, the foundation is the biggest private charity organization in the country that invests money into social projects, particularly the education of pour children. The process of creating the foundation was coordinated by the World Bank, while the administration of “BOTA” was assisted by the international organization IREX.

A range of Ukrainian non-governmental organizations have already united their efforts to repeat the Kazakh experience concerning the Lazarenko’s money.

The organizations initiate the process of creating an independent charity foundation with a Steering Committee, which will guarantee the efficient usage of the recovered funds.

In coming days the organizations will make a public presentation of this initiative, having a potential to become an important case for recovering corrupt assets to the harmed nations.

Currently there is no unified scheme in the world, which can be used for repatriation of the stolen moneys to the victimized nations. Rare stories of success are complicated, as well as cost much time and money.

The Ukrainian government, by starting these manipulations with numbers, dubious legal acts and a strange PR-campaign, has proved that it aims not so much to recover the Lazarenko’s assets, as to politicize this topic and its connection to Tymoshenko as we approach Vilnius.

Four wars of Kolomoisky. How the oligarch returns his influence