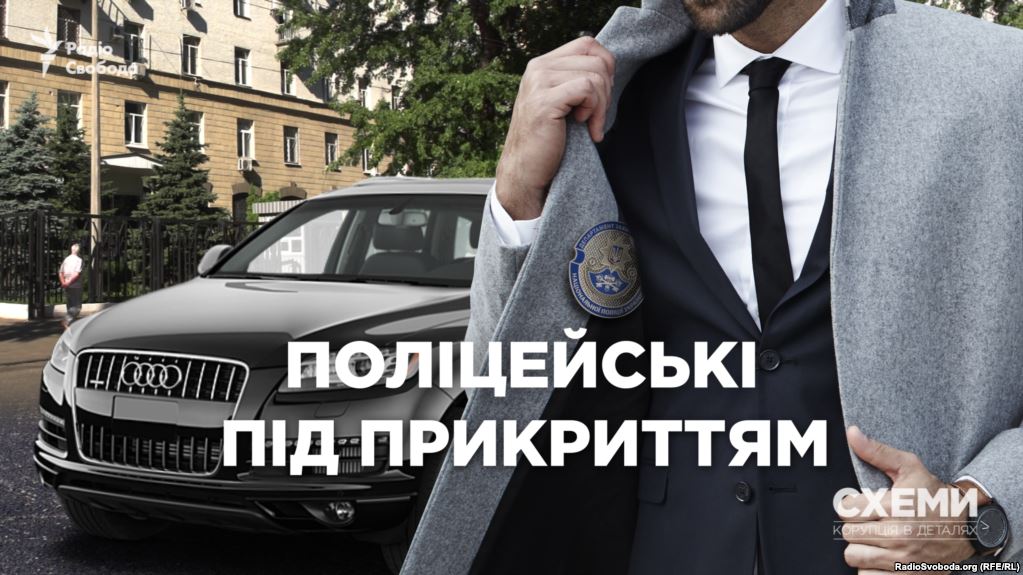 What is going to happen if to take the infamous police unit – Department for Combating Economic Crimes – conduct its seeming re-attestation and call it the Department for Protection of Economy of the National Police?

Right, in fact it’s only the name that will change. In reality the new department works as before. How do officers of the department live? Investigation of “Schemy” program (a joint project of Radio Freedom and the TV channel UA:Pershiy).

On Baggovutivska st. in Kyiv there are several departments of the National Police, in particular, the Department for Protection of Economy.

This department was created within the framework of police reform; it took the functions of the former Department for Combating Economic Crime. Its officers have to detect, prevent and stop crimes in the sphere of economy and combat corruption and bribery.

For example, together with other colleagues, law enforcement officers of this department investigate illegal extraction of amber, laundering money off of the banks and illegal gambling business.

Since one of the spheres of work of the department is the preventive activity, officers control state procurement and look for possible abuses of power. “This year as a result of such activity cancelled were more than 450 state procurement operations for the amount of more than 3 billion UAH”, – says the speaker of the Department Natalia Kalynovska.

Among other things, this department, as an operative and analytical center, has to collect a first-hand information on economic crimes and later transfer it to investigative bodies of the National Police of Ukraine, Prosecutor’s Office, Security Service of Ukraine to initiate proceedings.

Why does an operative officer need to rent a garage if he does not have a car?

There was one Audi Q7 with Vinnitsia number plates that the crew of “Schemy” program have seen several times in the court yard near the department’s building. Such a car costs on average about 30 thousand USD.

As of 2015 the car is being owned by Volodymir Kovbasiuk. He is a father of Alexander Grushenko, senior operative officer of the unit of major cases of the Department for Special Investigative Techniques.

The operative officer’s father on whom the car is registered worked as a chief doctor at the outpatient clinic in the village near Kryzhopol of Vinnitsa region and in 2010 even became the deputy of the village council from the Party of Regions. People in the village council say: Volodymir Kovbasiuk still works as a doctor, but has recently taken a vacation. We could not contact him before the video was published.

Each time a father was buying forest lands near Kyiv, Alexander Grushenko worked as a senior operative officer on major cases of the Department for Combating Organized Crime. Another land plot in Boryspil district, already in the end of 2016, was bought by his mother Vira Grushenko.

Everything that the declaration of the senior operative officer for 2016 has is the apartment in Kyiv that he was using for free and the rented garage. Along with this, there was no car indicated, neither owned nor with the right to use.

Alexander Grushenko refused to answer the program journalists’ question on why he does not declare his father’s car.

You declare one house but use another one?

His colleague Alexnader Omelchuk – deputy head of the unit of combating corruption. He’s been working in law enforcement for around 13 years already.

In 2015-2016 Omelchuk declared a 126 sq.meters house in the Knyazhychi village near Kyiv that belongs to his father-in-law.

However, on the Facebook page of Omelchuk’s wife we found a photo of his family in the yard of another house. On one of the photos one can see not only Omelchuk himself but also a Lexus that he drives.

Based on the photos journalists found this house. It turned out that the land it stands on is registered on the mother-in-law of Alexander Omelchuk.

The video crew was going there several times during three weeks at 7 a.m. and saw how a police officer was leaving off for work from this yard – but not from the house of his wife’s father that he declared.

On the question why he did not declare the house that he uses, Omelchuk asked to make a written request. In his written reply Omelchuk stated that he declared realty objects according to requirements of the Law “On Prevention of Corruption”.

In particular, it might mean that Omelchuk was not using this house as of 31 December 2016. According to clarifications of the National Agency on Corruption Prevention, when submitting an annual declaration, if some objects as of December 31 of the previous year are not in the possession, use, or ownership of the subject of the declaration or members of his family, they should not appear in the declaration, even if they were on such a status during a certain time in the reporting period.

Alexander Melnykovych – chief operative officer of the Department for Protection of Economy.

He comes to work on a BMW X5. However, such a car is not in his declaration for 2016. Starting from December 2014 the car is owned by the father-in-law of the law enforcement officer. According to the information of “Schemy” program, before that the car with the same number plates was in the ownership of Alexander Melnykovych.

Operative officer and his wife own two apartments in Kyiv and a house near the capital. But Melnykovych refused to talk to journalists about his family’s assets.

Among others journalists turned their attention to one of the deputies of the head of the Department Ihor Zvezdin. He is a law enforcement officer with more than 18 years of experience and his wife works in the Prosecutor’s General Office.

Among the declared property of the family there are apartment and a house in Luhansk, as well as two cheap cars. A costlier car that policeman uses is Toyota Highlander registered on his 63-year-old father Valeriy Zvezdin.

According to the declaration the Zvezdins rent an apartment in Kyiv. Other relatives of the law enforcement officer have a much better situation with property. His father owns an apartment in a newly constructed residential building in the center of Kyiv and several months ago bought a land plot and a part of the town house in a closed cottage town near Mezhygirya.

In 2016 Ihor Zvezdin worked as a Head of the Department for Protection of Economy in Dnipropetrovsk region. In the same year his mother-in-law paid a share contribution and later signed an acceptance act for the apartment in the newly constructed residential building in Dnipro.

Where do the relatives of a police officer get money from for new apartments and cars? “Schemy” sent a written request to Ihor Zvezdin, however, he never replied on it. Along with this, the father of the high-level official says that he allegedly earned money in Russia. “I work in Surgut as a deputy director of a construction company. I’ve been working there for 25 years. For now, yes, I am here (in Ukraine), on vacation”, – he stated.

How does the Department fight corruption among its officers?

“We have a personnel unit, just like any law enforcement agency, that conducts preventive measures, interviews personnel, even demonstrates some educational videos showing what unlawful activity can lead to. This is not just about bribes, but, drunk driving as well – meaning any facts that can negatively influence their work and the work of the department in general”, – says Kalynovska.

So why is it that not all the property used by policemen can be declared? “The Law of Ukraine clearly indicates: if a person uses a car for a long period of time and continues doing so, for example, for 2016 as of 31 December 2016, a person must indicate that. If a person uses it twice, three or four times, it can be not indicated in the declaration, this relates to any civil servant”, – says Kalynovska.

Soon Ukraine will have a new Service of Financial Investigations that will detect crimes in the economic, financial and tax spheres. Officers of the Department for Protection of Economy of the National Police have good chances to get a job there. But the question stays whether they will be ready to maximal effectiveness, transparency and integrity that the society expects from the representatives of a new agency.

a joint project of Radio Freedom and the TV channel UA:Pershiy,