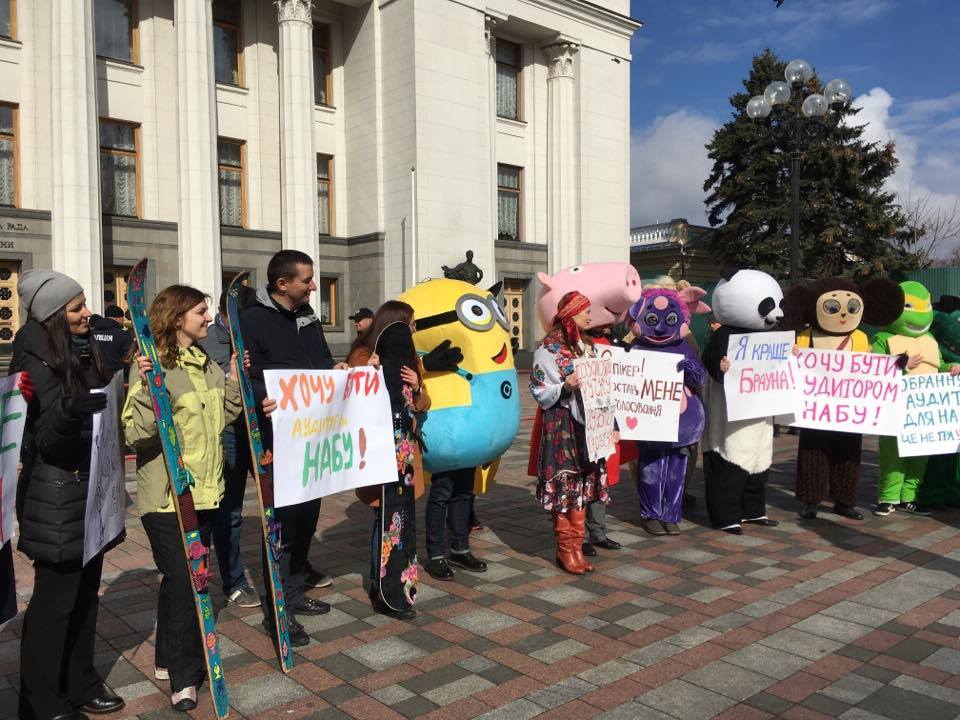 Today, the activists of anti-corruption organisations dressed up as ski instructors and cartoon characters picketed the Parliament demanding to stop the election fraud of auditor of the Anti-Corruption Bureau.

The participants of the direct action were the following: “ski instructors”, “snowboarders”, “Pepa pig “, “Shrek,” ” Ninja Turtles” and other cartoon characters that offered themselves as candidates for the group of auditors, which in their opinion, was being formed non-transparently and with the violations of the law.

Activists accuse two parliamentary parties – the Narodny Front and Bloc of Petro Poroshenko – in an attempt to appoint a little-known foreign security consultant with a dubious reputation as the auditor under the parliamentary quota. The later has already begun to criticise the work of the Bureau.

They are talking about Briton Nigel Brown, whose name for the first time has been voiced by the Head of the BPP, Ihor Hryniv, during the consideration of the issue of appointment of the auditor of NABU by the Parliament. Brown himself refuses to answer the question of who has invited him to Ukraine and why he, commercial counsellor of the Russian oligarchs, must be elected to audit independent law enforcement agency by the Ukrainian Parliament.

“Who is Mr Brown? What is his experience? Is he an independent figure? He does not give a direct answer to these questions, and it resembles the situation of a businessman who happened to be a “ski instructor”, with whom Yanukovych’s associates planned to sign a billion-dollar contract to build LNG terminal”complains one of the participants of the street action from Anti-corruption Action Centre, Daria Kaleniuk. “Mr Brown had surprisingly been present each time his candidacy had to consider whether in the Parliament or the Committee. His independence is highly questionable. How come a busy person to find the time and money to come to Ukraine three times during 1.5 months? This looks like the implementation of a specific plan, where the facade of “foreign independent professional” covers loyal and controlled person whose hands will kill Anti-Corruption Bureau,” adds Kaleniuk who is wearing a helmet and is holding the skis in one hand and the  poster “Parubiy, make me auditor of NABU!” in other.

We would like to remind, that according to the law, the only way to dismiss the current Director of the Anti-Corruption Bureau, Artem Sytnyk, is to get a negative report on his work prepared by the commission of three auditors delegated by the Parliament, the Government and the President.

The scandal with the appointment of the auditor under the parliamentary quota started once the faction of Narodny Front and Bloc of Petro Poroshenko neglected an auditor selected by the relevant committee and instead put forward their agreed candidate – Nigel Brown.

Mr Brown did not participate in the competition, and he was not supported by the Anti-Corruption Committee. Moreover, the Committee, in an open selection process, which began last December, chose an entirely different candidate for an auditor of Bureau – current US Deputy Inspector General Robert Storch. He has years of experience in conducting audits of the FBI and Interpol. However, in the absence of the votes, the Speaker had to return the matter to the reconsideration of the Committee, which, for greater certainty of a positive result, was enhanced with three new MPs from the BPP.

At the first Committee meeting, these MPs started to actively demand to consider the candidacy of Brown and recommend it to the Parliament. After the failure, part of the MPs resorted to provocation, as they gathered at a secret “meeting” and “voted” for the candidacy of Brown in violation of the law. Although this “decision” has no legal force, the Parliament Speaker Andriy Parubiy still has put it to a vote last session week. Again, the Parliament did not have enough votes for its consideration.

“It is symbolic that the rebels were going to their basement gathering and decided to support Brown on 16 March. Three years ago, just on 16 January, fearful Yanukovych’s accomplices met and voted for dictatorship laws. Now we have the “Committee decision of March 16” on the auditor NABU. The consequences of both decisions are almost the same,” says Ekaterina Butko from Automaidan already at the second peaceful protest in the row. On the day of consideration of Nigel Brown candidacy in the Parliament, the Automaidan activists blocked the entrances of the Parliament.

The activists do not exclude the possibility that the speaker again would be “playing on the side” of the rebels and put to the vote a fake decision of the MPs of the Anti-Corruption Committee. Under this decision, the Parliament is proposed with two candidates instead of one that won in a fair contest. After demarche and fraud, performed by the largest parliamentary factions – the BPP and the NF – it is not that hard to guess who will gather more votes among the potential auditors – say the organisers.

“Today’s parade of cartoon characters, which are also” asking to be auditors of NABU ” is a reflection of turmoil, launched by the President and MPs. The government is frightened by recent high-profile arrests, on its own has turned the competition for auditors into an absurd. This soap opera is watched at home and abroad, including in the central office of the global Transparency International. The appearance of “ski instructors” and fraud of selection procedure of auditor has undermined the public confidence in their future assessment. The remains of this trust may also be lost by the people who are now in the office thanks to activists who died on Maidan,”explains Yaroslav Yurchyshin, the Executive Director of Transparency International Ukraine. “The purpose of this show is to get a comfortable auditor who would sign the right conclusion and will follow a political order to “kill” anti-corruption agency.”

Activists stress that gross violations and intrigues during the process of choosing candidates for auditors of NABU make the whole audit procedure and any of its findings questionable and politically biased. They call illegal the attempts to put the two candidates to the vote.

“Our Committee was tasked to choose the auditor. We held a competition, listened to all the applicants and transparently by the majority of votes supported the candidacy of US Attorney Robert Storch. Now all of this is crossed out by a desire of the government to push a pocket auditor. Nothing other than fear can explain such behaviour. I urge all colleagues in Parliament to sober up and stop playing this dirty game aimed to destroy the Anti-Corruption Bureau. The first audit should be entrusted only to a professional nonpartisan person, whose conclusion would be independent and impartial. If the President is so eager to see Mr Brown among the auditors of Bureau, he can delegate Brown to the commission himself under his quota, ” says the Head of the Anti-Corruption Committee, Yegor Soboliev.

According to the Law “On the National Anti-Corruption Bureau of Ukraine,” the President, the Verkhovna Rada and the Cabinet of Ministers annually determine one member of the audit commission from among persons who have considerable professional experience in the bodies of law enforcement, prosecution, international courts or international organizations, have necessary knowledge and skills for such assessment (audit) and have an impeccable reputation.

On 18 March, after the scandal with the selection of auditor by the Parliament, the Prime Minister of Ukraine Volodymyr Groisman announced the selection of the auditor of NABU from the Cabinet of Ministers.

“We Began the selection of the auditor of NABU from the Cabinet of Ministers. Oleksandr Saenko and Pavlo Petrenko will meet with civil society representatives to discuss the issues of the open selection of a representative of the Government to the commission that will conduct an independent assessment of NABU,” Groisman wrote on his Facebook page.

According to him, it is critical that this selection is transparent at most in order to select a really decent and professional candidate with impeccable reputation and skills. “I look forward to a constructive dialogue between the government and the public as well as the election of a truly responsible representative,” – the Prime Minister added.