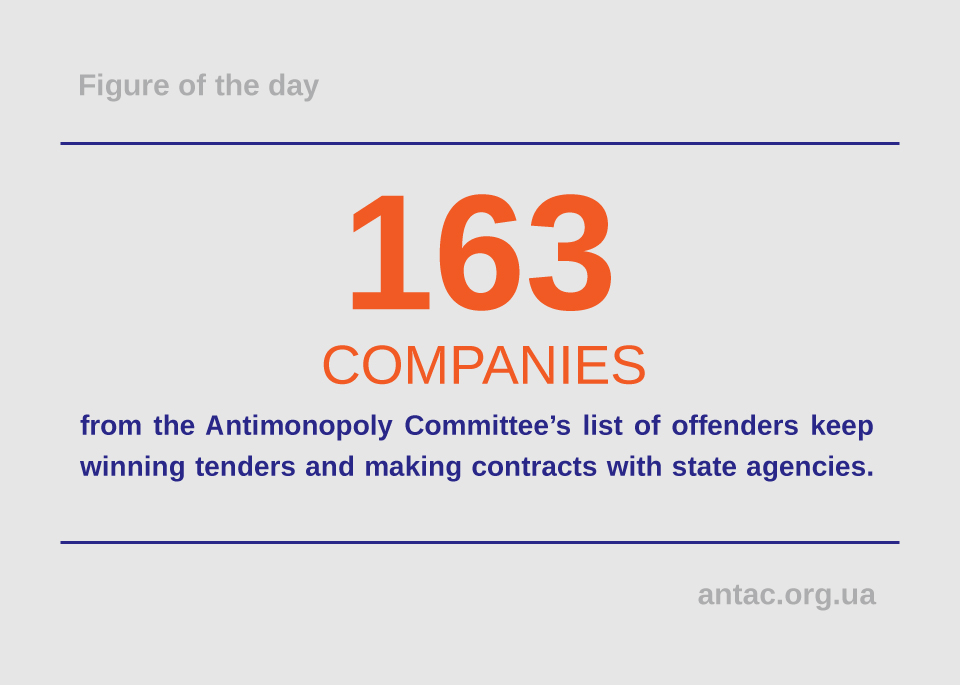 According to the law, the company is debarred from participating in public procurements for three years if it was called to account for collusive arrangements at the bidding.

The Antimonopoly Committee and its divisions make such decisions and form a so-called “blacklist” accordingly. In the end of 2017, there were total of 1108 companies.

In most cases, the offenders were successful in below-threshold procurements (amounting to less than 200 thousand UAH for goods, and less than 1.5 million UAH with respect to services). 9 of them were also tender winners, which enabled them to receive almost 66 million UAH from public agencies.

While in the second case the companies break the law submitting false data to the supplier about them not being “blacklisted”, making agreements at below-threshold is not actually an infringement. Some clients deliberately split their procurements into smaller sums to have below-threshold procurements instead of tenders.

“The law does not require public clients to vet the procurement participants – whether they are in the Antimonopoly Committee’s “blacklist”, — says Oleksandr Lytvyn, legal expert of the Anti-corruption Action Centre. — They have the right to check the data though. It is quite easy — just enter the Antimonopoly Committee’s site and browse the “blacklist” to find the company. Unfortunately, we tend to find many cases of public agencies ignoring the tool. It enables the offenders to submit false information and receive the money from public agencies”.

The total sum of the money received by the offenders both at tenders and below-threshold procurements in 2017 can be estimated at hundreds of millions of UAH. For instance, according to Open Data Bot, in 2016 such companies won 460 mln UAH worth of tenders. Most of those contracts were made close to the end of the year, namely in October-December.

Examining the “blacklisted” companies, one would find out many of them appeared in high-profile corruption public scandals.

Kharkiv “Construction Group International” LLC is among offenders that were winning tenders in 2017. In 2015, it attempted to embezzle 7 mln UAH when constructing a new building for V. N. Karazin Kharkiv National University. Subsequently, the AntAC reported that and the company was fined and included into the blacklist – which failed to prevent it from participating in tenders though. Overall, in 2017, “Construction Group International” LLC received over 5 million UAH.

“Vizyt” LLC owned by Ruslan Bereziuk, former member of the Party of Regions, continued “catering for the army” and won two tenders worth 3.6 million UAH in total – after  the corruption scandal involving the National Guard lieutenant colonel who was caught accepting a bribe, and the Antimonopoly Committee’s decision in 2016. Moreover, in August 2016 – June 2017, “Vizyt” LLC made 12 contracts in below-threshold procurements.

The rules do not seem to apply to “Elbi” LLC that was suspected by the Security Service of Ukraine of installing faulty fence for Lviv Airport at an excessive price. In October 2016, the company was included in “the blacklist”, yet in 2017, it won two open tenders worth 4.1 million UAH to fence Chernivtsi Airport and Kakhovka Hydroelectric Power Plant.

Rodos Invest Company linked with Oleksandr Yanukovych’s business partners and suspected by the journalists of tender collusions in 2014 and 2016, keeps participating in bidding despite its inclusion in the list of ofenders. Last year, it took part in seven procurement procedures, yet failed to win any. However, to circumvent the requirements of the law on procurements, it keeps making agreements on below-threshold procurements.

Another example worth attention is “Virilis” LLC that was brought to account for coordinated anti-competition activities by the decision of Volyn territorial division Administrative Board of the Antimonopoly Committee of October 31, 2017.

It does not prevent “Virilis” LLC from participating in the tender worth 848,640 UAH on January 5, 2018, and claiming it has not been brought to account for coordinated anti-competition activities within the last three years  – as indicated in the documents available at ProZorro web-portal.

As of January 5, 2018, “Virilis” LLC became a winner of the procurement and the 843 thousand UAH contract was signed.

Possible solution is introduction of the register that would display “the blacklist” data directly in ProZorro system. Besides, the provision allowing the rule-breakers to participate in below-threshold procurements should be revised.