First talks about the creation of Anti-Corruption Court started in June 2016 when the Parliament was adopting amendments to the Constitution regarding judiciary.

At that time President Petro Poroshenko in his speech to MPs noticed that there is no more important reform than judicial one. In one month, on July 13, he signed the Law “On the Judicial System and Status of Judges” which envisaged the establishment of the Supreme Anti-Corruption Court.

The Law did not specify the exact deadlines of creating this court.

“Supreme Anti-Corruption Court is being established, and competition for positions of judges of this court should be announced within twelve months from the date of entry into force of the law that determines the special requirements for judges of this court,” the document stated.

Consequently, the Parliament should adopt one more law which will define the powers and principles of functioning of the Supreme Anti-Corruption Court.

It should be done until the end of June 2017. The Anti-Corruption Court should be launched till the end of March 2018. This is the obligation, prescribed by the Memorandum with the International Monetary Fund and one of the conditions for obtaining the next IMF tranche.

The preparatory process for the launch of the Anti-Corruption Court is sluggish. During a year only two draft laws were registered in the Parliament which determine the court’s role in the judiciary system, the basics of its work, the requirements for judges, and the procedure for their selection.

This is a progressive Draft Law No. 6011 of joint authors, among them: Oksana Syroyid, Yehor Soboliev, Mustafa Nayyem, Ivan Krulko and others; and the Draft Law No. 6529, which was submitted by Serhiy Alekseev from the Block of Petro Poroshenko.

Establishes anti-corruption specialization of current judges in local and appellate courts for consideration of all corruption cases, both criminal and administrative offenses

Such inconsistent position of presidential faction on anti-corruption judiciary surprises. The Anti-Corruption Chambers or specialization do not solve the problem of judges’ independence because they will be created on the basis of unreformed courts and include will current judges; according to this model new anti-corruption judges will not appear soon and will be selected by the High Qualifications Commission without additional guarantees of fair competition. 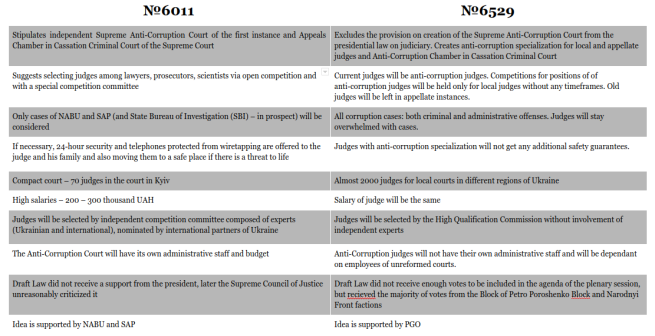 For now, none of the draft laws is receiving enough votes in the Parliament. Meanwhile, the absence of Anti-Corruption Court nullifies the work of two newly created anti-corruption authorities, NABU and SAP. Only few cases out of dozens which NABU filed to courts have finished trials.

International partners of Ukraine (EU, G7 countries, US) repeatedly stated that anti-corruption courts are an important missing element of the anti-corruption reform and processes for their creation should begin as soon as possible.

Therefore, representatives of expert community from civil society institutions and interested international organizations-donors which are working in Ukraine, formed an informal working group and developed a concept of Anti-Corruption Courts, which should assist Ukrainian MPs to reach a consensus  and agree on the powers, role and principles of functioning for the independent Anti-Corruption court in the judicial system of Ukraine.

The establishment of autonomous and independent anti-corruption court is logical and consistent step after the creation of the Anti-Corruption Bureau and Specialized Anti-Corruption Prosecutor’s Office.