Home Новини Not to reprimand: why there are all grounds and procedures to dismiss Kholodnytskyi?

Not to reprimand: why there are all grounds and procedures to dismiss Kholodnytskyi?

Yesterday media released some excerpts from the conclusion of the member of the Qualifications and Disciplinary Commission of Prosecutors (QDCP) regarding the punishment of Nazar Kholodnytskyi. The main motive of which is that he is guilty but cannot be dismissed. 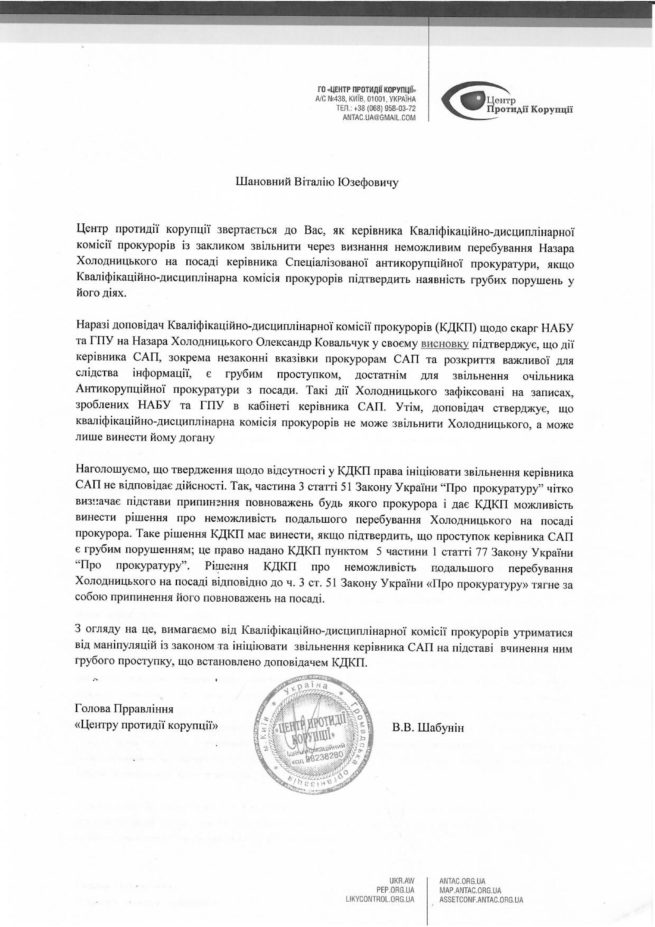 Excerpts from the conclusion shed light on the legal justification made by the QDCP member, but at the same time, they indicate an outright manipulation of the law.

On the one hand, the QDCP member testifies gross offence committed by Kholodnytskyi and recognizes the existence of grounds for his dismissal, however, he suggests to apply only a reprimand, explaining it by his own manipulative interpretation of the Law of Ukraine “On the Prosecutor’s Office”.

The main motive for the conclusion of the QDCP member is the following norm of the Law of Ukraine “On the Prosecutor’s Office”:

Referring to the word “solely” and Part 1, Article 51 (where there are really no such grounds for dismissal), the QDCP member comes to a completely false conclusion, giving Kholodnytskyi the status of full immunity from dismissal. There is indeed a kind of immunity, but it does not prevent the Commission  from dismissal of Kholodnytskyi from the position in this case.

The conclusion is false because while reading the law in such a way, the rapporteur completely ignores other norms that point to the opposite: the QDCP not only has the right but also a duty to dismiss Kholodnytskyi.

In particular, Part 2 of the same Article 41 establishes cases of termination of the powers of a prosecutor in an administrative position.

2) he/she is dismissed or his/her prosecutorial powers are terminated.

The law clearly divides the grounds for dismissal of the prosecutor from an administrative position and dismissal from the position because of the termination of the powers as a prosecutor. These are different procedures, grounds, and procedures.

The key manipulation of the QDCP member is combining different concepts and different types of dismissal envisaged by the Law “On the Prosecutor’s Office”.

In particular, Part 3,Article 51 determines the grounds for terminating the powers of any prosecutor.

1) reaching the age of sixty-five;

3) recognition as missing or dead;

4) decision of the Qualifications and Disciplinary Commission of Prosecutors on the impossibility of further stay in the public prosecutor’s position.

To answer the question what is the impossibility of the further stay of a person in the prosecutor’s position and how such decision is made see Part 2, Article 49.

1) the disciplinary offense committed by the prosecutor has the nature of a gross offence;

The only thing that is not regulated by law is the notion of “gross offence” – leaving it to the discretion of thedecision-makers. However, published excerpts from the conclusion indicate that the QDCP member has no doubts that Kholodnytskyi’s offences are gross and they are obviously gross from the point of view of a legal analysis of their consequences and from the point of view of common sense.

It should be understood that the process of bringing the prosecutor to disciplinary liability is a separate procedure that differs from the dismissal procedure, for example, in case of the loss of citizenship or court’s verdict against the prosecutor enters in force.

For example, Part 6, Article 49 of the Law of Ukraine “On Prosecutor’s Office” states that in case QDCP according to the results of disciplinary proceedings against the prosecutor who holds an administrative position has established the fact of improper performance of his official duties, the Commission shall initiate a discussion at the Prosecutors’ Council of Ukraine to recommend dismissal of the public prosecutor from the administrative position. Thus, such form of disciplinary proceeding as dismissal from an administrative position is applied because of improper performance of official duties of the public prosecutor. And Kholodnytskyi has so-called “immunity” from such dismissal.

At the same time, if a disciplinary offence committed by a public prosecutor has the character of a gross violation, then, according to the results of disciplinary proceedings, the QDCP may decide on the impossibility of the further presence of a person in the position of the prosecutor, which, in accordance with the requirements of clause 4, Part 3, Article 51 of the Law is the basis for termination of his powers.

Similarly, clause 5, Part 1, Article 77 of the Law of Ukraine “On Prosecutor’s Office” (article defining the powers of the QDCP) determines that the QDCP

Therefore, since the conclusion in black and white states about gross offence committed by  Kholodnytskyi, all the grounds provided by law for making the decision by the Commission about the impossibility of Kholodnytskyi staying in position of the prosecutor, according to Part 3, Article 51 of the Law of Ukraine “On Prosecutor’s Office” entails the termination of his powers as the prosecutor.

Moreover, such arguments of QDCP member is nothing more than an attempt to allow the authorities to leave “their own special prosecutor” on the cases and to come clean themselves. Since not recognizing offence committed by Kholodnytskyi as gross one or not to taking into account the most obvious possible evidence is simply impossible.  Thus, they decided to use legal manipulations with the status of Special Prosecutor.