New shell companies in the schemes of Martynenko – NASHI GROSHI

Recently «DW» informed that the Anti-Corruption Prosecutor’s Office of Austria conducts an investigation against the indicated Austrian companies on suspicion of embezzlement. These companies acted as “shells” trading titanium and uranium ores mined at Ukrainian state enterprises.

It is against the activity of these companies that the National Anti-Corruption Bureau of Ukraine initiated criminal proceedings within the framework of which ex-MP, Mykola Martynenko, his business-partner from the Board of Directors of Naftogaz Serhiy Pereloma and the manager of the indicated state enterprises Ruslan Zhurylo were declared as suspects.

The investigation of this public-private partnership has been known already a year ago when the former minister of economy Aivaras Abromavičius submitted a complaint to the National Anti-Corruption Bureau of Ukraine. However, “Bollwerk” and “Steuermann” kept control of the cash flows of state enterprises. It was in December that “Nashy Groshy” published data received from customs about the fact that the United Mining and Chemical Company continues to export ore through an Austrian company “Bollwerk”. Another inspection showed that in March 2017 the intermediary of UMCC was changed. And for the director of the National Anti-Corruption Bureau Artem Sytnyk it was no surprise  we perceive this company as a black horse. The new intermediary became a German company “TS Taunus Chemical GmbH», registered on Ms. Natalia Streitenberg.

We do not know how this German frau, besides gender and citizenship, is different from the Austrian guy Wolfgang Eiberger on whom the mentioned above “shell companies”, “Bollwerk” and “Steuermann”, were registered. We can say, however, that the change of one discredited agent for a similar German one made no difference for UMCC – the price for the Ukrainian state enterprise stayed the same.

For example, Koreans “Daesung Logistics Co., Ltd” continued as of 29 March to receive from UMCC rutile concentrate for 590 USD per tonne through “TS Taunus Chemical GmbH” just as they did in January-February through “Bollwerk”.

Of course, you can suppose that all this operation of the National Anti-Corruption Bureau of Ukraine was initiated to change the “roof” over flows of the enterprise – introduce their own “shell” and keep the margin. However, there are a few questions left.

The German company peacefully replaced the Austrian one. Meaning with a direct consent of the management of the UMCC. And there, despite the electronic bracelet on the leg of Mr. Zhurylo, it’s his managers who continue to rule. And continue giving out millions worth tenders to Zhurylo’s favourites (here, for example, fresh 84 million UAH for “Imex Minerals”).

The Ministry of Economic Development has also no worries about that, the ministry that has to appoint or release of duties the Head of the UMCC. Stepan Kubiv has not done anything to change the management of the state enterprise that is planned for privatization this year. Meaning we have a full consensus, as a result of which losses continue to be generated during export operations of UMCC at the time of the ongoing criminal proceeding.

The same story with the change of Austrian “shell” for import operations happened also on the Eastern Iron Ore Enrichment Works Company.

The state enterprise regularly buys Sulphur from the Russian producer “Kaspygaz”, and the party of the contract according to this scheme was the very same Austrian “Steuermann”. And there you have it, starting from March intermediary functions were transferred from the discredited and suspected Austrian firm to a new “shell” – now Caspian flows go through an Estonian firm “AltairTRADE OU”, registered in November 2016. 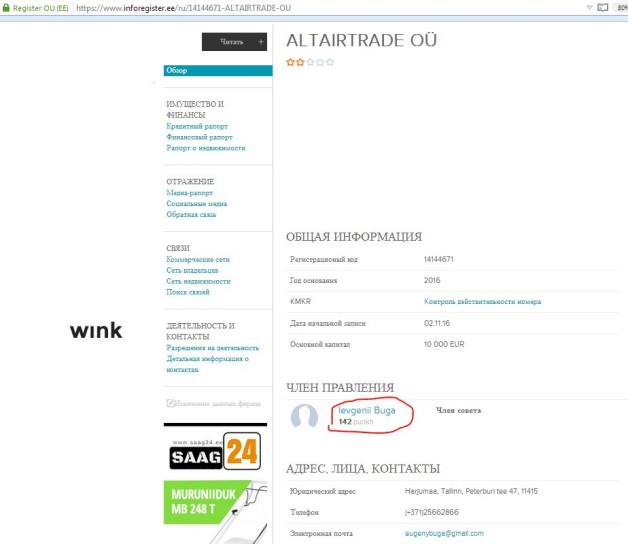 Along with this, two things stayed the same. First, the price – stayed on the same level of 9 cents pro kilo as it used to be. Secondly, the “shell” itself continues to be affiliated with the scheme creators. Member of the Board of the Estonian firm turned out to be Eugene Buga, who has been known by readers of “Nashy Groshy” for many years as an ex-founder and head of “Ebergy Trade Group” which since long ago has set on subcontracts of Eastern Iron Ore Enrichment Works Company and UMCC. Buga is also the founder of a Latvian company “Zodiak Plus” which was awarded with hundreds of millions worth tenders in the system of “Energoatom”, “Eastern Iron Ore Enrichment Works” and the state enterprise “Smoly”.

Therefore, it is important to understand what acting and not arrested government officials are going to do with the contracts of the Eastern Iron Ore Enrichment Works and UMCC, according to which changes of “shells” do not change amount of losses for Ukraine. As of today – the system works as usual. According to the rules of the well-known joke: “It is better to pay a fine every day than to lose the pace for one time”. 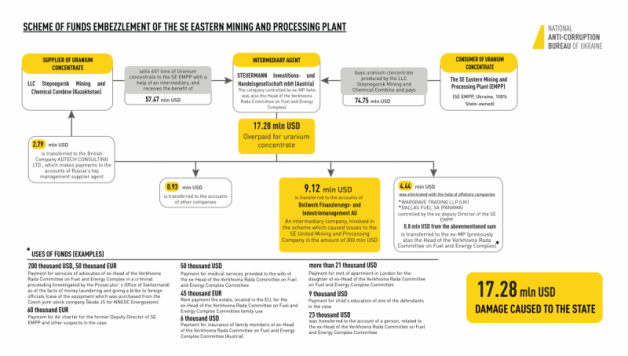 First published on April, 25, 2017 at www.nashigroshi.org