One of the people carrying out the campaign to discredit AntAC is Vasyl Apasov, the Head of the Board of the NGO “National Interest”. He was previously a ‘journalist’ who was fired by the Newsone TV channel.

Apasov’s organization carried out an “investigation” into AnTAC activity that was presented in Parliament personally by the MP Pavlo Pynzenyk.

Pynzenyk is a long-time assistant of ex-MP Mykola Martynenko, who is currently under NABU investigation. 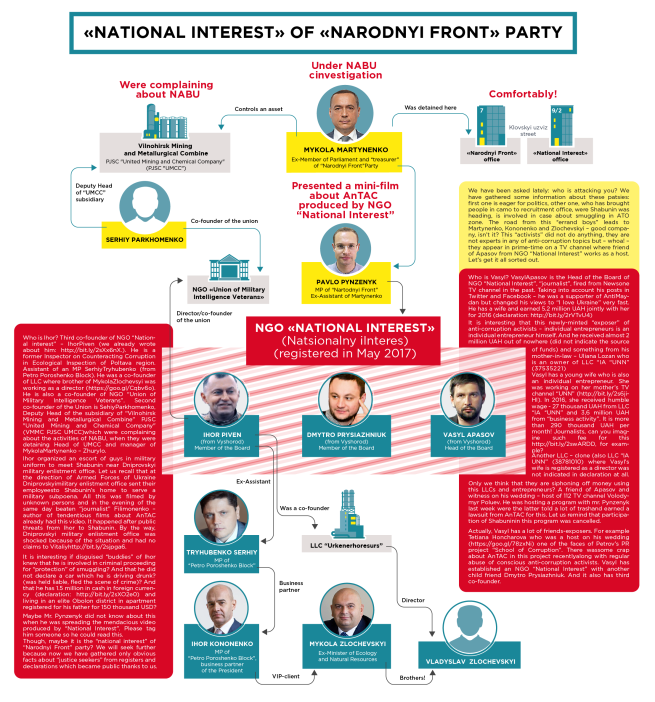 Vasyl Apasov and his wife Anastasia jointly earned 5,2 million UAH in 2016. Anastasia Apasov was working at her mother’s TV channel “UNN”. In 2016, she received the modest wage of 27,000 UAH and 3,6 million UAH from “private enterpreneurship”. The latter was more than 290.000 UAH per month. Journalists in Ukraine do not have such an income.

The co-founder of the NGO “National Interest” is Ihor Piven. Piven is a former Inspector on the Counter-acting of Corruption in the Ecological Inspection of the Poltava region. Piven is also an assistant to MP Serhiy Tryhubenko (of the Petro Poroshenko Bloc). Ihor Piven was a co-founder of a limited liability company where the brother of Mykola Zlochevsyi was serving as director. Piven is also a co-founder of an NGO entitled the “Union of Military Intelligence Veterans”. The other co-founder of this NGO is Sehiy Parkhomenko, the Deputy Head of a subsidiary of the “Vilnohirsk Mining and Metallurgical Combined PJSC United Mining and Chemical Company” (VMMC PJSC UMCC) which was complaining about the activities of NABU when they detained Mr. Zhurylo, the Head of UMCC and the controlled by Mykola Martyneko.

Ihor Piven organized an escort of men in military uniform to meet Shabunin near the Dniprovskyi military enlistment office.

Ihor Piven is also involved in criminal proceedings for the “protection” of smuggling. Piven failed to declare a car that he was driving drunk (he was held liable, as well as fleeing the scene of the crime). In addition, he has 1.5 million UAH in cash and is living in the elite Obolon district of Kiev in an appartnemnt registered under his father’s name worth $150.000.000.

MPs can still spend budget funds and do not report. Should COVID-19 still be blamed for this?