The National Agency on Corruption Prevention prepared a draft law that allows all the law enforcement officers assigned to the Anti-Terrorist Operation zone not to submit their declarations. The NACP also proposes to hide information about a city/village name where a declarant owns real estate, and a lot of other information currently available to the general public.

The Anti-corruption Action Centre got a hold of the law draft text, submitted for approval to the Cabinet of Ministers by the NACP. 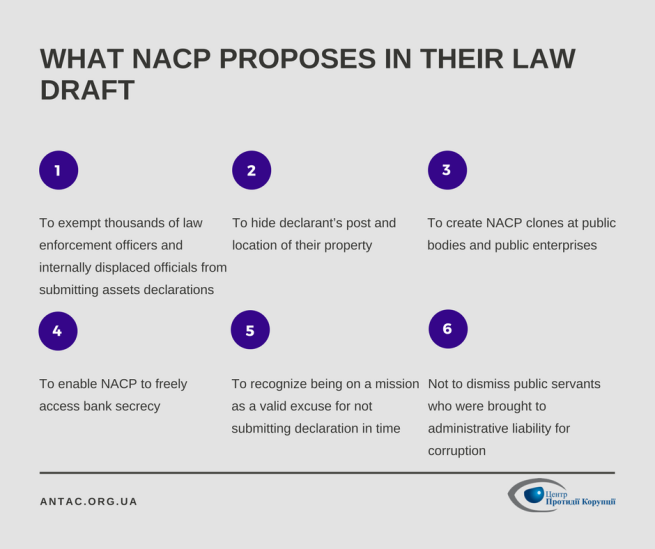 According to the document, the NACP seeks the right to determine the special order of declaration not just for the law enforcement and intelligence, as it is the case now, but also for military prosecutors and other law enforcement officers assigned to military and civilian administrations, as well as internally displaced persons.

“It will legalize the NACP permission to classify the declarations not just for the Security Service of Ukraine officers, but for any law enforcement, — claims Vitaliy Shabunin, the Anti-corruption Action Centre Head of the Board. — This would open Pandora’s box and enable thousands of officials to hide their declarations, all it will take is a document stating that they are internally displaced persons or had been to the ATO zone on a mission. Now any prosecutor from the Prosecutor General’s Office or the National Police official who happens to set their foot in the ATO zone will be exempt from submitting declaration” — he adds.

Another know-how of the project — to hide the position held by the declarant in a publicly accessible declaration, as well as position they are applying for. What is more, the NACP even wants to classify the name of the location where a declarant’s property is situated.

33) passage four of the part one of article 47 shall be rendered as follows:

34) passage two of part two of article 49 shall be rendered as follows:

“Verification of the fact of actual submission by the subjects of declaring that ceased activities related to exercising functions of the state or local government, or other activities, stated in subparagraphs “a” and “b” of paragraph 2 of part 1 of article 3 of the Law due to reorganisation, liquidation of the state body, governmental body of the Autonomous Republic of the Crimea, local government body, or the legal entity of public law…

“Such provision of the law poses serious threat to journalists’ and civil activists’ work as it will significantly complicate analysis of public figures’ declarations”, — says Olena Shcherban, lawyer and the Anti-corruption Action Center member of the Board. — There can be a tenfold difference between a house in elite Koncha-Zaspa and that in a hundred kilometers from Kyiv, thus, by classifying this information the NACP effectually removes any possibility to follow the life style of an official”, — she says.

The draft law also provides for setting up special departments accountable to the NACP at state bodies and public enterprises for control and coordination of anti-corruption legislation enforcement.

This NACP cloning calls for significant budget allocations. All that at the time when the NACP failed to launch automatic declaration verification system and keep verifying declaration through written correspondence with public bodies.

Besides, the NACP would like to expand their authority concerning obtaining information and free access to bank secrecy. At the moment, they can obtain it through the court order which should serve as filter to avoid abuse. The same procedure is in place for the National Anti-corruption Bureau of Ukraine and other law enforcement officers.

Such commission has authority to make decisions in the matter of conflict of interest concerning village head and city mayor and secretary, head and deputy head of county, oblast and city district council, chief, which arose in the process of them fulfilling their responsibilities, except cases provided by part one of this article.

In Paragraph 8 of part one of Article 62 of the Law of Ukraine “On Banks and Banking” (The Official Bulletin of the Verkhovna Rada of Ukraine, 2001, No. 5-6, p. 30 with subsequent changes) to remove the words “by the court’s decision” and to substitute word “and” with words “and/or”.

“Bank secrecy is private information safeguarded by the law and cannot be obtained without a court’s order in all civilized countries, — explains Olena Shcherban. — Obtaining access to such information would be more than a human right violation, it would lead to massive manipulations and abuse on the part of public bodies”, — she adds.

The law draft contains numerous other preposterous provisions, such as, for instance, to recognize being on a mission as a valid excuse to not submit one’s declaration on time. Meaning that one can skip submitting assets declaration through being on a long-term mission, just like the notorious Odesa mayor Trukhanov, all while avoiding any responsibility whatsoever.

The NACP also proposes not to dismiss public servants that incurred administrative responsibility for corruption unless the court in its verdict selects disqualification from holding some posts as punishment.