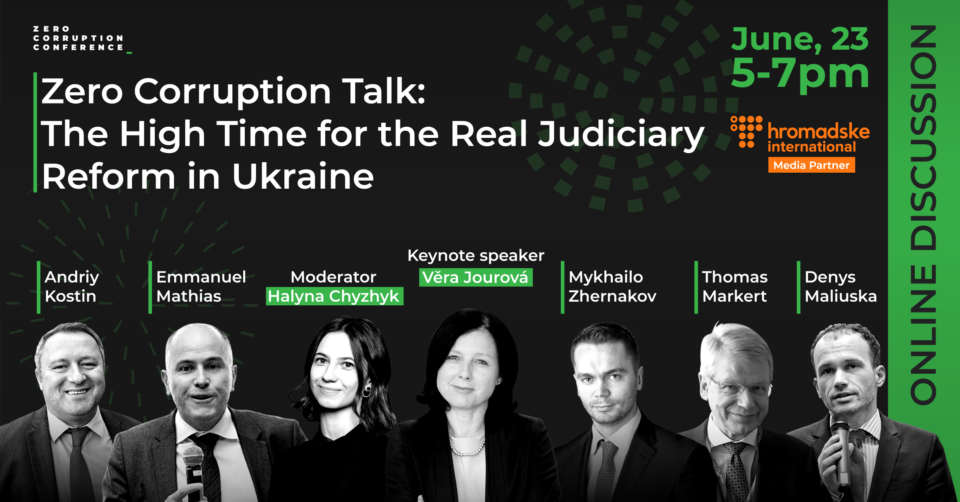 International experts played a key role in a success story with the High Anticorruption Court. This positive experience should be multiplied to the reform of judicial governance. This is the conclusion the experts came to during the public talk “The High Time for Real Judiciary Reform in Ukraine” on June 23.

The public talk was opened by a keynote speech of Vera Jourova, a Vice President of the European Commission for Values and Transparency. In her speech Ms Jourova underlined that the principle of judiciary independence cannot be ensured without the proper reform of judicial governance bodies. Ms Jourova also stressed the importance of involving civil society experts to the reform which is crucial for strengthening citizens trust in it.

Unfortunately, six years after the Revolution of Dignity judiciary remains the least trusted public institution in Ukraine. Numerous attempts aimed at cleaning and reforming judiciary that had been made in  2014-2019 failed. The responsibility for the failure lies with the main bodies entrusted with the appointment and dismissal of judges – the High Council of Justice (HCJ) and the High Qualification Commission of Judges (HQCJ). In autumn 2019 Ukrainian Parliament adopted a new law rebooting the HQCJ and cleaning the HCJ from tainted members and engaged into the process well-reputable international experts. However, the HCJ blocked the implementation of the law.

Mr Mykhailo Zhernakov, head of board at DEJURE Foundation, stated that the reform of judicial governance is crucial for achieving the integrity of judiciary: “If we keep the same High Council of Justice in place, we’ll have the same quality of the judges and whatever is the number people will not get justice”. Mr Zhernakov explained that the reason for the failure of previous attempts to reform judiciary is that we entrusted representatives of dependent and corrupt system with cleaning and renewing itself: “I have severely criticized one provision, popular among European countries, that the judicial governance bodies should have the majority of judges elected by their peers, so by the judges of the country. We have tried that for several years at least since 2016 and it failed miserably”. Mr Zhernakov underlined Ukraine`s success with the engagement of international experts to the selection of judges of the High Anticorruption Court and stressed this experience should be multiplied to judicial governance reform. Admittedly, for the first time in the history of its cooperation with Ukraine IMF touches on the judiciary related issues. In the recently signed Memorandum with the IMF Ukraine committed to the comprehensive judicial reform. In particular, the reform of the HCJ. “The public trust in the judiciary remains low in Ukraine. That’s why we became interested in that issue because, ultimately, it’s an issue that is critical for economic development’, stated Mr Emmanuel Mathias, Deputy Unit Chief at the IMF. Mr Mathias emphasized that

from amongst the commitments one of the most important is the establishment of an independent panel with international experts in its composition which will be tasked with the pre-selection of the HCJ candidats and scrutiny of the existing members integrity. Important also, international experts should have a decisive role in the process.

Mr Thomas Markert, Director, Secretary of the Venice Commission also stressed the important role international experts play in the renewal of judicial governance. He mentioned that the Venice Commission favored the international involvement to the selection of High Anticorruption Court judges. “I think exceptional situation in Ukraine justifies involvement of internationals in a selection of members of certain judicial or para judicial bodies”, Mr Markert stated. He also favored the involvement of the civil society to the process, but in this case it is important to have a transparent and safeguarded process of selection of civil society representatives. Last but not least, Mr Markert stated that the principle of independence of judiciary can only be ensured along with the principle of integrity: “The corrupt judge cannot be an impartial tribunal and he or she cannot be independent because of course a corrupt judge cannot resist critical pressure, because it’s vulnerable. So it is very important indeed to have judges who are honest and have full integrity”.

Mr Oleksandr Banchuk, Deputy Ministry of Justice, also joined the discussion. He ensured that the the Government’s plan is the implementation of the reforms Ukraine committed to before the IMF: “This is our commitment and we will follow it strictly”.