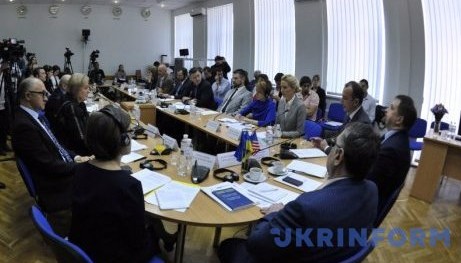 On June 16th experts of international donors presented joint vision of creation of the anticorrupton court for Ukraine.

The vision was developed by the informal working group and offered for consideration to the Council on Judicial Reform under the President of Ukraine as well as to the VR Committee on Judiciary and the Committee on Combating Corruption.

In the vision representatives of international donors offered Ukraine to implement the following steps to ensure independence and efficiency of judiciary:

Authors of the concept confirmed readiness to provide necessary assistance for Ukrainian stakeholders for development of draft law based on respective concept.

MPs who registered the draft law #6011 on anticorruption court reinstated their rediness to amend the draft law according to recommendations of the international community or to repeal the draft should the President accept the concept for his own draft law.

For more details on common vision on anticorruption court offered by the international community please see the article from Eka Tkeshelashvili, the Head of the Anticorruption Initiative of the EU in Ukraine.

As of now, there are two draft laws on anticorruption judicial institutions registered in the Parliament.

Read the detailed comparative analysis of these draft laws.

How Medvedchuk helps Surkis to withdraw 7 billion UAH from Privatbank