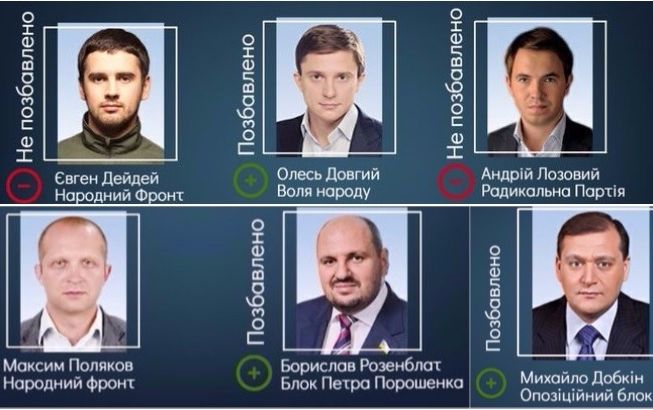 Although last plenary week the Parliamentary Committee on the Rules of Procedure supported only 1 out of 5 requests of the PGO and the Specialized Anticorruption Prosecutor’s Office, all of them together with an additional one on MP Dobkin were put on voting in the plenary. 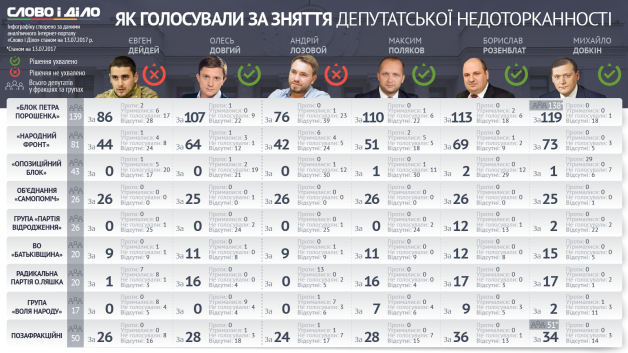 Vicious circle and mutual cover up helped MPs Deydey and Lozovyi to save their immunity.

Half-steps were taken regarding two abovementioned “Amber Mafia” MPs Rozenblat and Polyakov: they lost their immunity, but the Rada didn’t grant consent for their arrest and detention. This undermines the efficiency of further investigative actions as the suspects may flee the country.

The Parliament also lifted the immunity of the MP Dovgyi.

However, the sixth MP Dobkin was finally allowed by the Parliament to be detained, and was arrested by the court ruling on July 15 for 60 days with the alternative of 50 million bail.

And this became possible only due to people who went out to the street – huge peaceful rally took place in front of the Parliament all day long on July 13.

People were banging at the barrels and chiming, demanding the parliamentary immunity to be significantly limited, Dobkin’s immunity to be lifted and the request for his detention to be supported, and the bill on anticorruption court to be adopted.