5 candidates applied for the newly opened position of the National Anti-corruption Bureau of Ukraine auditor. Among those applicants there are 2 retirees, Human rights advocate, Israeli lawyer and former Assistant U.S. Attorney.

We learned it from the published list of candidates and their documents on the site of Parliamentary Committee on Corruption Prevention and Counteraction. It is the third time that the Verkhovna Rada has held competition for the position of the NABU auditor. However, the Parliament has not managed to select their quota representative to the audit commission.

The Anti-corruption Action Centre analyzed all parliamentary candidates for the position in the commission on external evaluation of the NABU.

Retired, head of organization “ANTIMAFIA”, who also applied for the position of the NABU director in 2015, and later for the position of head of Odesa department of the Anti-corruption Bureau. According to his autobiography, over 20 years have passed since he last worked in law enforcement. In 1991-1994, he worked as investigating officer and deputy inter-district prosecutor in Illichivsk environmental Prosecutor’s office.

His references (recommendation letter) come from himself from his own “Antimafia” organization. He is quite prejudiced against the Anti-corruption Bureau, as he did say so himself during the selection process to the Civil Oversight Council at the NABU.

Human rights advocate, worked as a judge in the UNO international court and represented Ukraine in the UN Human Rights Council.

A few months ago, MP Oleh Liashko suggested him as a candidate for the position of the NABU auditor. Coincidentally, the MP’s declaration information is currently being investigated by the NABU detectives. In 2015, he was delegated to the Constitutional Commission by the Decree of President Poroshenko, along with Mykhailo Buromenskyi, selected as the Cabinet of Ministers quota NABU auditor.

Curiously, if Vasylenko is delegated as auditor from the Parliament, two out of three members of the auditor commission will be human rights advocate.

It is noteworthy that Volodymyr Vasylenko’s references come from “Ukrainian Legal Society” NGO, headed by Oleh Valeriiovych Bereziuk. The latter is also co-owner of another NGO – “All-Ukrainian Movement “Force of Law”. This NGO is headed by former Yulia Tymoshenko Bloc MP Andrii Senchenko who in 2014 was deputy head a.i. of the President’s Administration.

Lawyer, notary, has lived in Israel for the last 25 years, where he owns a law firm “Vadym Melamed lawyers and notary”. In 2015, he applied for the position of the NABU Director. However, Melamed does not meet the requirements for the position of the NABU auditor stipulated by the Law of Ukraine “On National Anti-corruption Bureau”, as he has no “significant experience in pre-trial investigation bodies, prosecutor’s office, foreign courts or international organizations”. This candidate has worked exclusively as a lawyer in Israel for the last 25 years, working primarily on labor law and providing legal assistance to emigrants from Ukraine. Melamed’s only reference also comes from the NGO headed by himself.

American, former Assistant U.S. Attorney, Baker & McKenzie LLP partner. Has significant experience in the U.S. pre-trial investigation bodies and the U.S. Attorney Office: he spent 6 years at the Eastern District of New York where he prosecuted organized crime cases, with a focus on corruption- and money laundering-related Russian oligarchs and white collar cases. Served as the lead U.S. prosecutor in the extradition of Pavel Borodin, a Russian government top-official, to Switzerland to face charges of money laundering and embezzlement. Worked with Sergei Magnitsky. Currently he is persona non grata in Russia.

It should be noted, that a negative audit finding is a legal basis for the extraordinary dismissal of Artem Sytnyk, incumbent Director of the Bureau, from his post, as well as state budget funding cutback of the independent law enforcement authority. The audit is to be held by the commission made of three representatives nominated by the Government, Parliament, and President of Ukraine.

A year ago, in May 2017, the Cabinet of Ministers of Ukraine selected its representative to the post of the NABU auditor – Mykhailo Buromenskyi. The President of Ukraine has not yet nominated his representative. The Verkhovna Rada is holding the selection for the third time already.

The first time the Parliamentary Committee on Corruption Prevention and Counteraction chose Robert Storch, then the Deputy Inspector General at the U.S. Department of Justice. However, the leaders of factions of Bloc Petra Poroshenka and Narodnyi Front also proposed voting for Nigel Brown, British private detective – without any selection, in violation of the Rules of Procedure of the Verkhovna Rada. Following loud scandals and several votings, both Storch and Brown failed to receive enough votes for nomination. The second selection ended in recommendation of former U.S. federal prosecutor Martha Boersch, former Spanish prosecutor Carlos Castresana, Ukrainian human rights advocate Oleksandra Yanovska, and Ukrainian lawyer Serhii Honcharenko. Again, none of the candidates received enough support in the Parliament; Oleksandra Yanovska had the most votes, she is currently a judge of the Supreme Court.

In order to hold evaluation (audit), members of the external control commission have the right to access the NABU’s financial documents, materials of the criminal proceedings on which the pre-trial investigation has been completed;they can have confidential interviews with the NABU workers, Specialized Anti-corruption Prosecutor’s Office, other state and law enforcement bodies. 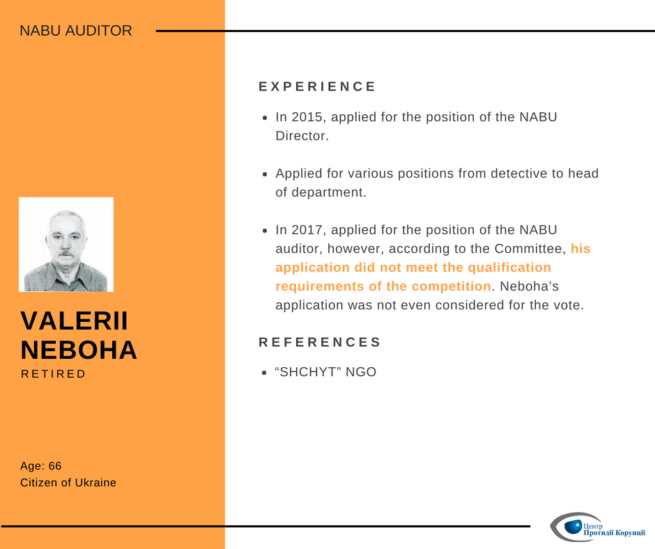 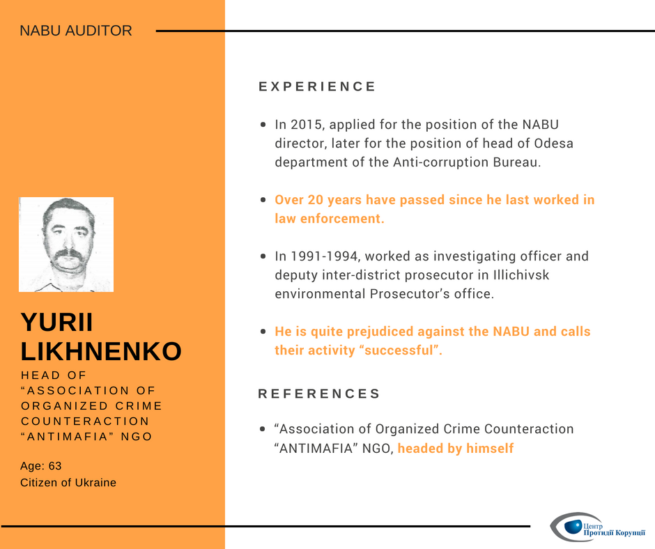 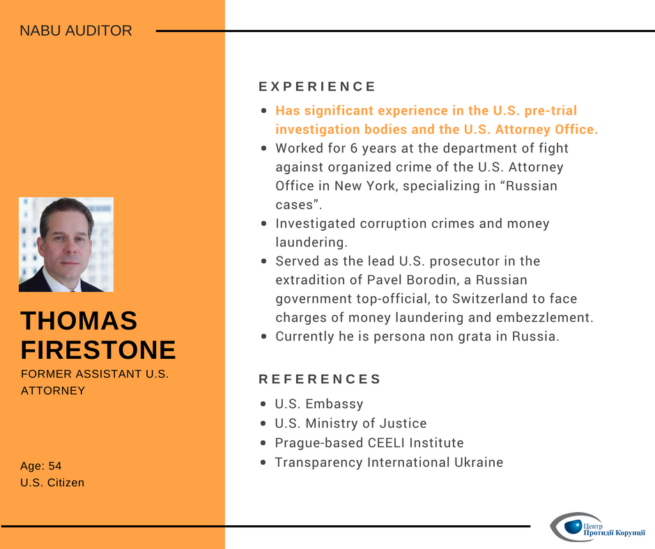 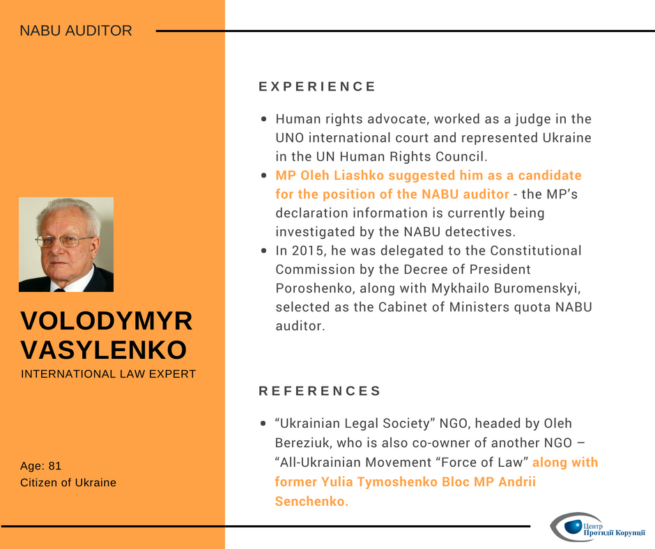 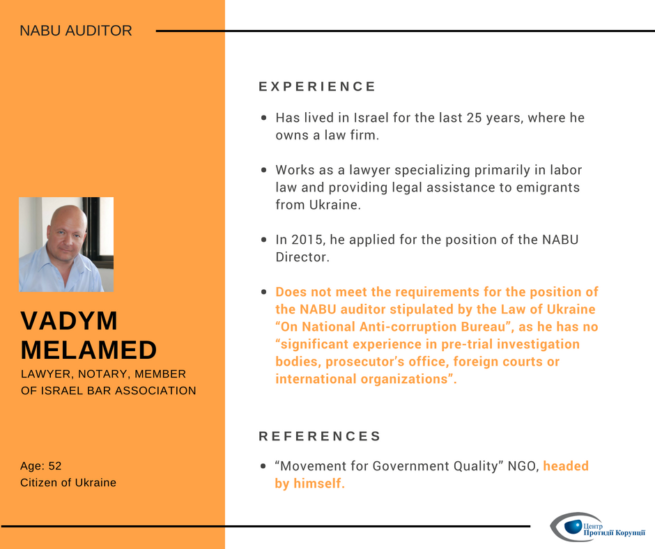