Home Новини How to stop bank robbers in Ukraine

How to stop bank robbers in Ukraine

On June 21, prosecutors conducted searches in the house of Andriy Klyuyev, the former head of Security and Defense Council and close ally of ex-President Viktor Yanukovych. Klyuyev is suspected of organizing violent police crackdowns against protesters during the EuroMaidan Revolution that ousted Yanukovych on Feb. 22, 2014.

The search happened two years and three months after the investigation against Klyuyev started in Ukraine and the European Union imposed sanctions against Klyuyev brothers.

Not surprisingly the searches didn’t lead investigators to any credible evidence. What exactly prosecutors tried to find in the abandoned house of Klyuyev, two years after his escape from Ukraine, is not clear.

But it is clear that the General Prosecutor’s office fails to understand and collect even publicly available evidence of grand bank robbery conducted by Andriy and Serhiy Klyuyev, who jointly embezzled billions of hryvnias from two state-owned banks in Ukraine.

As of Dec. 31, 2015, Andriy and Serhiy Klyuyev owe to state-owned Oshchadbank and Ukreksimbank about Hr 15 billion ($600 milllion) and Hr 7.3 billion ($292 million), respectively. These are loans a set of companies ultimately controlled by Klyuyev brothers took in 2006 and from 2009 – 2012 to develop solar energy plants in Ukraine.

During the last two years, state banks have been desperately trying to collect these loans through commercial court proceedings, but have failed to recover anything as most of the Klyuyev’s companies that received funds are already bankrupt and have no assets to repay. And prosecutors are not backing state banks with evidence, which they had to collect through the course of criminal investigation over the economic crimes of Klyuyev brothers.

It is important to note that, other than the Klyuyev brothers, the two big state banks were crediting an impressive list of both former and current influential businessmen with close ties to politics (Yuriy Ivanyushchenko, Viktor Polishchuk, Sergiy Tyshchenko and others). Many of these loans will unlikely be ever repaid. 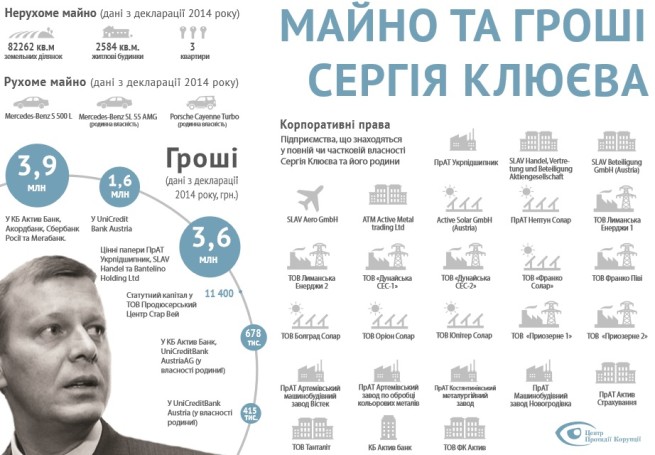 In the meantime, in January 2015, Oshchadbank and Ukreximbank declared jointly Hr 16.4 billion ($656 million) in losses, becoming two of the five worst performing banks of the country. These banks are systemic and authorities can’t declare them insolvent, as this would cause default of the entire financial and banking sector of Ukraine.

The next $1 billion International Monetary Fund loan tranche expected in July will likely be used to back up Oshchadbank and Ukreximbank to prevent their collapse. Another 77 Ukrainian banks, which were not too big to fail, went bankrupt within the last two years.

A reason why these institutions got in trouble is the same – funds were merely siphoned from the banks through bad loans to companies, controlled by insiders and ultimate owners of the pocket banks.

The state-financed Deposit Guarantee Fund submitted hundreds of complaints to prosecutors asking law enforcement to investigate fraud and money laundering, but not a single case end with the conviction of an owner or insider of the fleeced bank.

The losses reflected in the complaints are worth of hundreds of billions hryvnia, probably no less then half of annual budget of Ukraine.

The largest concern is who will repay these losses?

Individual depositors of the robbed banks will be repaid partly by the Deposit Guarantee Fund up to the limit of Hr 200,000 each. The fund itself borrows from the Ministry of Finance to cover the huge demand of defrauded depositors.

The Ministry of Finance, in turn, takes loans from the International Monetary Fund and other international financial institutions, which have to be repaid by Ukrainian taxpayers.

Every taxpayer in Ukraine is repaying debts of those group of insiders and owners of the banks, who ended up with funds in hands and total impunity.

Moreover, bank secrecy laws protect the perpetrators and we are not entitled even to know whose debts we are paying for and will continue to repay the next dozens of years.

Ideally, smooth professional work and cooperation should be taking place among three government institutions: the Prosecutor General’s Office, the National Bank of Ukraine and the Deposit Guarantee Fund.

Prosecution has to coordinate investigations across the country of hundreds of similar cases regarding insiders and owners of the banks, which were driven to bankruptcy through insider bad loans, money laundering and other fraudulent criminal conducts.

However, the example of Andriy and Sergiy Klyuyev loans from Oshchad and Ukrexim indicates total incapability and unwillingness of prosecutors to investigate and prosecute the most obvious and vivid cases.

Hundreds of complaints submitted by the Deposit Guarantee Fund to the Prosecutor General’s Office have been sent to various other law enforcement agencies in different regions of Ukraine.

Prosecutors should ensure the professional coordination of these investigations, which are complex financial crimes. There are already some cases in the public domain revealing that prosecution of bank fraud cases ends with non-guilty verdicts. In private conversations with depositors – the victims of bank robbery — we just hear examples how prosecutors are bribed and/or influenced to simply not investigate such criminal cases properly and effectively.

For already two years, a team of asset recovery experts from a joint United Nations and World Bank STAR (Stolen Asset Recovery) initiative have proposed to help the Deposit Guarantee Fund in civil lawsuits. However, the fund claims to not have enough evidence to move ahead with cases, even though it has an entire department of investigators.

The National Bank of Ukraine has to back up prosecutors and the Deposit Guarantee Fund with information and prevent the theft of funds by insiders from more banks.

However, the recent story with bankruptcy of Bank Mikhailovsky indicates serious discrepancies in the work of national bank regulator as well.

All three state institutions, which have to work closely to recover funds and protect victims and financial interests of the country, usually blame each other in non-professionalism and poor performance.

All three institutions — National Bank of Ukraine, Deposit Guarantee Fund and General Prosecutor’s Office — are under the political influence of President Petro Poroshenko.

Kostyantyn Vorushylin, a former co-owner with Poroshenko of the International Investment Bank, is head of the Deposit Guarantee Fund.

Valeria Gontareva, who used to be a board member of Investment Capital Ukraine, which still provides services for Poroshenko businesses, is the governor of the National Bank of Ukraine.

So, in a situation of vicious circle of corruption, the lack of senior political will and failure of state institutions to do their jobs, there could be two parallel solutions for Ukraine now:

Loans granted by banks to clients usually are protected by bank secrecy laws. However, there should be exceptions when the public interest overrides bank secrecy, which is not an absolute right. The National Bank of Ukraine doesn’t even need to change legislation. It could issue a regulation waiving banking secrecy in situations where public interest to know information is higher then a need to protect it.

NBU сould set up a public registry of loans, which should contain the following information:

The right of every taxpayer in Ukraine to know whose debts we are paying for overrides bank secrecy in these circumstances. To say otherwise only protects those who fleeced the nation’s banks at great public expense.

Information in the registry should contain the date of the loan’s issuance, amount, name of creditor and debtor, collateral, names of loan guarantors.

Partly information about loans is already public. Specifically there is a requirement to reveal details of loans of a certain amount for companies who are members of a stock market (smida.gov.ua).

This resource helped the Anti-Corruption Action Center to reveal the hundreds of millions in euros that Ukreximbank loaned to companies controlled by Sergiy and Andriy Klyuyev.

Another source of information about bad loans is a court registry, which reveals details of proceedings in criminal and civil cases against banks.

So part of the information about loans, especially non-performing ones, are already public and there is no reason to protect the remaining secret information.

A public registry of loans could be an amazing resource for civil society, investigative journalists and victims of bank robbery to analyze and identify persons behind the schemes.

In addition, it will be a powerful preventive tool for not allowing these persons and companies to obtain loans from banks in the future.

Such publicity is especially needed considering the incapability of law enforcement and controlling agencies to prosecute influential fraudsters.

Many bank robbery cases in Ukraine involve Western banks and offshore shell companies. This is how insiders and owners of insolvent banks hide their identities behind complex corporate structures.

For example, through one insider-loan scheme involving Western correspondent banks, at least 600 million euros were laundered out of Ukraine. And this came after the EuroMaidn Revolution.

It is now obvious that the unreformed law enforcement system in Ukraine is incapable and will not do proper investigations and prosecutions of such cases, leaving enriched perpetrators and no punishment.

Therefore, a temporary joint international investigation team with a mandate to conduct criminal investigations in Ukraine over cases involving Western jurisdictions could help to fill in the absolute hole existing now within law enforcement system in Ukraine.

Western countries and their taxpayers who are giving loans and financial assistance to Ukraine to repay debts of insolvent banks should be more interested in finding out and punishing those who allegedly stolen the money.

Moreover, such an exercise could help to trace money internationally and help Ukraine to recover funds stolen in the country, instead of giving more multibillion loans, which might be stolen again.

The joint international investigative team could work closed with the fledgling National Anti-Corruption Bureau of Ukraine, the Specialized Anti-corruption Prosecutor and the Asset Recovery Office.

Jose Ugaz, head of Transparency International, in his last visit to Ukraine, recommended Ukrainian authorities to study the Guatemalan experience, where an international investigative body was able to investigate complex money laundering and corruption cases.

A similar joint investigative team, which could be a light version of the Commission of Impunity in Guatemala, could be the best ever-technical assistance that the entire international community could provide to Ukraine – and probably the most cost-effective.