Firm closely associated with Petrenko, Minister of Justice, passed over 620 thousand EUR to the wife of Kirovohrad oblast chief of Security Service of Ukraine through Slovakia.

In May 2015 Olena Arkusha, wife of Kirovohrad oblast chief of the Security Service of Ukraine Oleh Arkusha, created firm “Elstrade s.r.o.”, registered, like so many others, in Žilina, Slovakia.

Soon another firm became a co-owner, which is connected with Pavlo Petrenko, Minister of Justice as well as the foreign lawyer whose services were used by Colombia drug cartels and North Korea government.

The offshore novices soon left the company, but not before leaving 620 thousand of the authorized capital of Slovak firm for the Security Service officer’s wife, as they never took the money back. Thus Olena Arkusha found herself an owner of a foreign firm with over 600 thousand EUR. Now let us take a closer look at this story.

Excerpt from the business register of Slovakia shows that Olena Arkusha from Ukraine is registered as the founder of “Elstrade s.r.o.”. 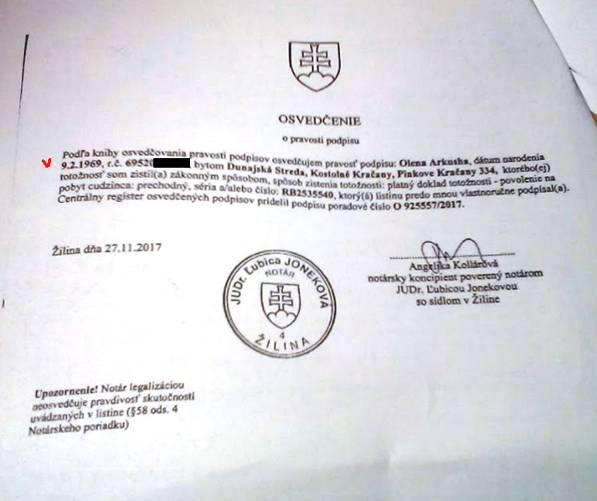 In September of 2015, “ Aidar Company limited” joined “Elstrade s.r.o.”. It is registered at the British Virgin Islands, its final beneficiary is Ian Taylor from Australia, who was linked to hostile takeover of TVi television channel. According to “Ukrayinska Pravda”, he created multiple dubious companies in New Zealand, also Mexican and Colombian drug cartels, the Triad Asian mafia groups, several terrorist networks and even North Korean government used his services. All in all, a handy dummy for any type of business.

“Aidar Company limited” was founded with the help of law firm “Mossack Fonseca&Cо”, which featured in international scandal in 2016: according to Panama investigation, the company assisted foreign citizens in tax evasion in their countries and money laundering. On April 3, 2016, 11 million secret documents were leaked to the press and published (the so-called “Panama Papers”) which confirm that “Mossack Fonseca” assisted clients with illegal transfer of large sums of money to offshore accounts.

“Nashi Groshi” journalists were able to get a hold of some of those documents. We learned that “Aidar” was created through “Mossack Fonseca” but with the help of Kyiv lawyer Viacheslav Uzhytskyi. He was the one providing all the documents copies and information necessary to found the company. In “Panama Papers”, Uzhytskyi features as “ABA Group” company representative, registered, as the documents show, nowhere other but in his flat. 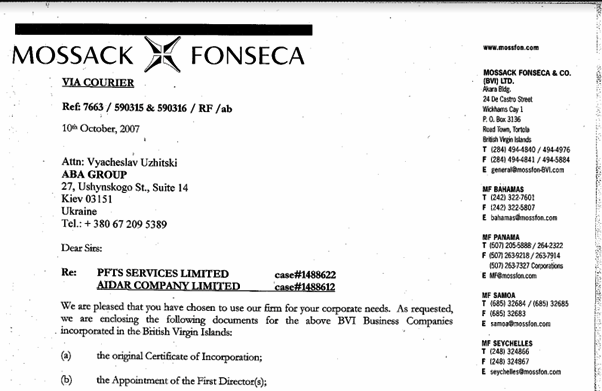 Uzhytskyi signs some letters as “Anglo Business Advisors Ltd.” representative – an intermediary company, which in Ukraine specializes in registering offshores. According to “VoxUkraine”, “ABA” registered 110 offshores in Ukraine.

Judging from their correspondence, Uzhytskyi refused to reveal the real beneficiary of “Aidar” even to “Mossack Fonseca”, adamantly insisting that it was Taylor. Real beneficiaries, unlike the lawyer, were not so cautious.

On November 27, 2017, “Elstrade s.r.o” shareholders in Slovakia decided that 90.08% share of Aidar co-owners will be assigned to Olena Arkusha, thus increasing her share to an even 100%. 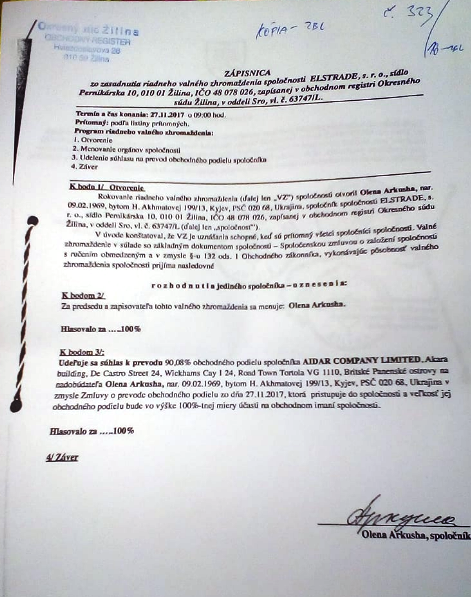 This agreement was signed by Olena Arkusha and Oleksandr Aheiev on the part of “Aidar”, signed as “Aidar Company limited” executive. 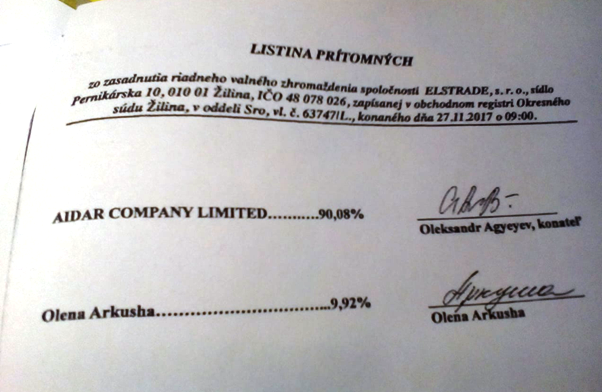 Aheiev has been a long-standing business partner of Minister of Justice of Ukraine Pavlo Petrenko, they are connected through a number of firms. Aheiev and Petrenko were registered as co-founders of “Firma Deklarant” LLC, “Zammler Ukraina” LLC, “Law company MLGroup” LLC.

Even after going into politics, Minister Petrenko has not severed his ties with the latter, for instance, he rents a car from “MLGroup”. Interestingly, “Law company MLGroup” LLC is co-founded by “Aidar company limited”. Thus, we end up with situation when the firm belonging to the partner of the Minister of Justice of Ukraine has passed over a share of 620 thousand EUR to Slovak firm belonging to the wife of the Security Service chief in Kirovohrad oblast.

“Elstrade s.r.o.” financial reports show no additional agreements that offer Aidar anything in return, such as real estate or money. “Nashi Groshi” found no mention of the Arkushas family funds that could compensate “Aidar” for such hefty sum. That is, Security Service officer’s family do have real estate, but they never sold it.

By the way, before January 2017, Olena Arkusha was registered as private entrepreneur dealing in wholesale of non-food consumer goods.

Security Service regional chief Oleh Arkusha himself is registered as owner of a 101-metre flat with a garage in Kyiv at 5 Shumskoho Str.

His wife Olena Arkusha is registered as owner of two parking spaces in Pechersk district. She also owns two vehicles: a 2014 Mercedes-benz ML 350 2014 purchased the same year and a 2015 Mercedes-benz G 350 TD purchased in 2015.

Mother of Kirovohrad oblast Security Service of Ukraine chief is registered as owner of a flat and 0.02 ha of land on which this house stands in Pechersk district, Kyiv:

Also, in 2015, mother and wife of the Security Service chief registered as owners of 0.05 ha of land each on the territory of Pohrebska village council in Brovarskyi district of Kyiv oblast. Plots of land are in close proximity to the Dnieper River, on the border of Kyiv city and Kyiv oblast:

There is one more person we cannot omit from this story, her name is Anastasia Mykhailivna Arkusha, born in 1988, possibly, a niece of Oleh Arkusha. According to “Nashi Groshi”, she was registered at the same address with Olena Arkusha – at Anna Akhmatova Street, Kyiv. Anastasia Arkusha is mentioned in the documents as the manager of Slovak firm “Elstrade s.r.o”. She has no business in Ukraine, yet in 2016 she registered to her name a 2016 Mercedes-Benz V 250. In 2015, Anastasia Arkusha registered the right to ownership of two flats of 124 and 58 square metres, as well as three garages at Pechersk district of Kyiv.

Anastasia Arkusha also features in the list of invaders taking over Chernechyi forest. For reference, 22 hectares of the relict Chernechyi Forest near Kyiv were taken over without any permits, and Security Service of Ukraine chiefs participated in the seizure. As of March 2018, Anastasia Arkusha’s plot of land in the forest was arrested by the decision of Shevchenkivskyi district court.

So, what do we have in the end? After Maidan events family of the influential Security Service of Ukraine officer miraculously got rich. However, it is not possible to verify through the official channels today. For reference, the Security Service of Ukraine representatives conveniently decided not to make their declarations public, their excuse – this would jeopardize the national security. As we can see, the word “national” refers not only to Ukraine.