Activists, friends and relatives of the deceased Kateryna Handziuk call the head of Kherson Regional Council Vladyslav Manger one of the instigators of her murder. The official investigation has not named those behind the murder yet. They announced suspicion only to performers and organizers. The key suspect of organizing the attack is Oleksiy “Moskal” Levin. He fled abroad. The head of Kherson Regional Council Manger denies relationship with “Moskal”-Levin. However, Schemes found out that one week before the attack on activist, Levin had received the recreation center on the beach directly from Manger’s lawyer almost for nothing.

“Who is behind Handziuk’s murder”? The demand to investigate resonant attack, which led to death of 33-year-old Kherson activist, is regularly heard in Ukrainian media thanks to the efforts of indifferent active Ukrainians and friends of the deceased. They point out alleged instigators of the murder, namely the head of Kherson Regional Council Vladyslav Manger (who has suspended membership in the Batkivshchyna party) and two representatives of the Poroshenko’s block: the head of Kherson Regional Administration Andriy Gordeyev and his deputy Yevhen Ryschuk. 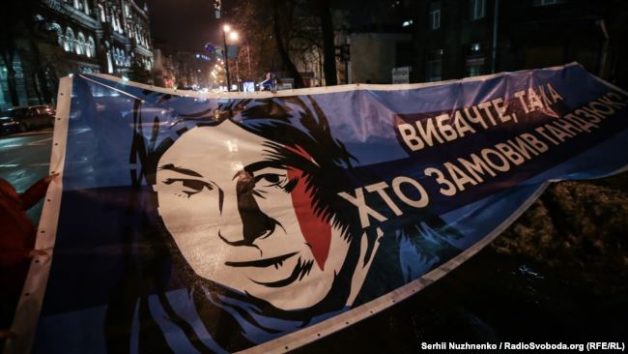 But the official investigation has announced suspicion only to organizers and performers. The key suspect of organizing the attack is Oleksandr Levin. His criminal nickname is “Moskal-junior”. He fled abroad. At the same time, the SBU and the PGO have not stated instigators’ names yet.

All three top officials in Kherson – Manger, Gordeyev and Ryshchuk – deny accusation regarding involvement to the “case of Handziuk”.

Recently, the head of Kherson Regional Council Manger also publicly stated that he hadn’t had relationship with Oleksandr “Moskal”-Levin, who is officially suspected of organizing the attack.

However, the analysis of public registers indicates that close surrounding of the head of Regional Council has business relations with the suspect in organizing the attack on Handziuk. One week before the attack, Manger’s lawyer gave “Moskal” the recreation center located on the Black Sea coast in Lazurne village almost for nothing.

Lazurne is the resort town on the Black Sea coast in Kherson region. Modern complex Oasis Beach stands out among old Soviet recreation centers. It was built in 2014 by Kherson businessman Leonid Avramkov. But since 2016, the complex is operated by quite different people. The local Prosecutor’s Office is currently investigating the raider seizure of the complex. The first suspicion in the case has already been announced.

Who received control over one of the most prestigious complexes in Lazurne?

The re-registration of the right over land and facilities located on it was made using the number of different legal entities through the chain of complicated registration actions that are currently investigated by law enforcement officers.

But at least since summer 2018, the right of ownership over the recreation center is confirmed in the Register by the company Lazurnyi Vidpochynok LLC.

Schemes found out that director of the company, which now operates the complex, is the person from the close surrounding of Vladyslav Manger. This is his lawyer and authorized person since elections in 2014 Andriy Murashkin. Murashkin has official status of the legal adviser to the head of Kherson Regional Council. He is Manger’s individual lawyer, for instance, during the lawsuit against Kherson journalist-investigator Serhii Nikitenko.

The victim in the raider case Leonid Avramkov confirms that control over the complex, which he had built, eventually was passed to Manger’s surrounding.

“Manger put his son Ivan there. I met him personally in summer 2018. He ordered to keep me out. I called the Police many times. As soon as the Police heard the name Manger, they immediately turned around and drove away”, told Avramkov.

Vladyslav Manger in his comment to Radio Svoboda denied his connection to the complex. He added that his son Ivan simply had the “rest” there.

Radio Svoboda received the document, the authenticity of which is confirmed by official registers.

This is the rental agreement of just the same Oasis Beach recreation center in Lazurne.

The document is dated July 25, 2018. This is exactly one week before the attack on Kateryna Handziuk in Kherson.

Who leased out the complex? Andriy Murashkin, Vladyslav Manger’s lawyer, who acted on behalf of the company Lazurnyi Vidpochynok LLC as its director.

Who received operation of the hotel located on the beach? Oleksiy Levin, the same criminal leader “Moskal”, who is now officially suspected of organizing Handziuk’s murder.

At the same time, Manger’s lawyer gave the complex located on the Black Sea coast to Levin, in fact, for nothing. The hotel has its own beach and 57 rooms. One day costs more than 2,000 UAH ($71,5). And Moskal received it for the nominal fee – only 500 UAH ($17) per month. The agreement is concluded for 7 years. It is still valid.

Manger’s adviser and lawyer Andriy Murashkin confirmed in his comment to Radio Svoboda that he leased out the hotel complex in Lazurne to Levin, however, he refused to explain why he gave it to him for the nominal fee, referring to commercial secret. He also stated that at that moment he did not know about the criminal history of Oleksiy Levin and he “could not think” of his further possible criminal intentions.

Vladyslav Manger, the head of Kherson Regional Council, who is called by Handziuk’s friends the alleged instigator of the murder, stated to Radio Svoboda that he did not know about business connections of his adviser Murashkin with Oleksiy Levin, the suspect of organizing the murder.

Levin himself insists that he has no relationship to the murder of Kherson activist. And as his lawyer stated he had never met her.