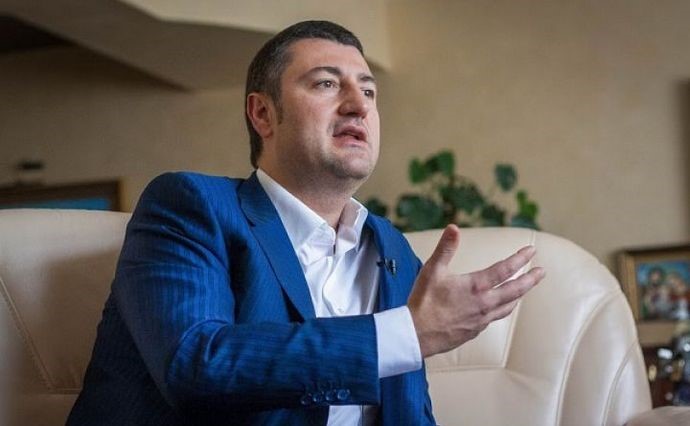 In 2014, the NBU issued Oleg Bakhmatyuk’s VAB Bank a billion-dollar loan to support the institution. But depositors did not receive their money because the owner took them. The NABU investigated guilty, but the Prosecutor General stepped into the case.

The position of the Prosecutor General foresees extremely serious powers. Only one signature can either give the green light regarding punishment or have catastrophic consequences and cost 1.2 billion UAH to the state.

It seems that the Prosecutor General Yuriy Lutsenko have chosen the latter option. He changed the jurisdiction of the case regarding theft of the loan of the National Bank by representatives of Oleg Bakhmatyuk’s VAB Bank.

This is about the investigation of the National Anti-Corruption Bureau of Ukraine (NABU) regarding state support of commercial banks after the Revolution of Dignity. At that time, taxpayers’ money were allocated to financial institutions to support them, so they would not go bankrupt and lose depositors’ money.

One of recipients of such support was VAB Bank, which was then owned by one of the country’s largest latifundists Oleg Bakhmatyuk. However, these money did not go for support of the institution. According to the NABU, funds were simply withdrawn through various schemes, and ordinary depositors of the bank could not take back their deposits.

At the same time, the police, who was already investigating the offences at the VAB Bank, had accidentally lost some evidence. Namely, one hundred volumes of the criminal proceeding that were stored in the basement of some third company and were flooded.

Loan with no guarantees

The NABU started to investigate Bakhmatyuk’s case in October 2016. Detectives were interested by the fact that in October 2014 the National Bank allocated 1.2 billion UAH to VAB Bank PJSC as the stabilization loan for financial rehabilitation of the bank.

The bank’s assets, namely commercial real estate in Kyiv and Kharkiv, as well as property of owners of the institution, should have been the guarantee of the loan repayment. However, the NABU detectives found that the bank had forged conclusions about the property’s value by which the loan was secured. The latter indicated inflated figures. This, in particular, became known from the decision of Solomyanskyi court.

According to the decision, the bank also did not provide the NBU with the program of financial rehabilitation. This is the detailed plan for using the loan for further operation of the institution. The National Bank did not have the right to lend money without this program at all.

If we draw parallels with ordinary borrowers, it will look as if the bank gave the huge loan to the person without the income statement, and who filed the dorm room, estimated at one million dollars for some reason, as the security.

How money were withdrawn

Initially, the bank unexpectedly resembled that it had the debt to Cyprus firm. The bank transferred 45 million USD (680 million UAH) to accounts of the company Quickom Limited right after receiving the regulator’s loan. The National Bank’s supervisor, who controlled all financial operations of the VAB Bank, did not “notice” this fact.

As it turned out, Quickom Limited was not the ordinary “lender” but it was controlled by Bakhmatyuk. That means that they paid the “debt” to themselves. Bakhmatyuk also owned another bank Financial Initiative through this company. Both institutions were declared insolvent by the National Bank in 2014 and 2015.

Later, the VAB Bank returned 380 million UAH of deposits to Trostyanets Meat Factory and the firm Svitanok, which were controlled by Bakhmatyuk. However, the NBU prohibited early repayment of deposits to affiliated companies at that time.

The rest of money was withdrawn through cash withdrawals. Ordinary depositors could not withdraw their money. They received 1,000 UAH per day through the bank cash desk.

In February 2019, the Prosecutor General changed the jurisdiction of the case and transferred it to investigators of the police under prosecutors’ control.

This is also evidenced by the NABU’s response to authors’ request, in which the bureau explains why this case could not be transferred.

As it became known, the first deputy chairman of the National Bank is suspected of corruption regarding loss of 1.2 billion UAH. According to the law, the investigation of corruption against officials of this level is the exclusive jurisdiction of the NABU.

“The NABU detectives conduct the pre-trial investigation of crimes …, if the crime is committed by the head of the National Bank, his first deputy and deputy, or size of the object of the crime or caused damage is five hundred or more times exceeds the amount of subsistence level”, according to the NABU response.

In the course of investigation the SAPO detectives and prosecutors found that similar cases were investigated by the police. They have repeatedly appealed to this department in order to take documents and cancel decisions regarding closure of these cases.

The NABU and the SAPO required these cases to analyze evidence, first of all. The anti-corruption authorities also wanted to prevent the fact that subjects could not use closure of cases by the police in order to cover up in the NABU’s case. Subjects of cases could refer to the police who did not find the crime in the case.

However, the Prosecutor General transferred the case to the police. He used his powers to resolve disputes regarding the jurisdiction, although there was no dispute in this case, according to the NABU.

However, the Prosecutor General’s Office has different opinion.

In response to the request of EP, the department stated that “bringing person to criminal responsibility starts from the moment when the person is announced the suspicion in committing the criminal offense”.

“The preparation to announce the suspicion” is not the stage that indicates that persons who committed the crime are well known and they are announced the suspicion, in the CCP’s understanding,” the PGO stated.

Moreover, the department states that information on the “established damage in the amount of 1.2 billion” is still unconfirmed.

“According to the request, 1.2 billion is the amount of “allocation by the National Bank of stabilization loan for the financial rehabilitation”, which, obviously, cannot be considered as the amount of loss on condition of repayment the loan”, stated the Prosecutor General’s Office.

The full response of the Prosecutor General’s Office can be found here.

How the criminal proceeding is destroyed

Among potential suspects in the case is former first deputy chairman of the NBU Oleksander Pysaruk, who was acting chairman during the vacation of Valeriya Gontareva, and the bank’s owner Oleg Bakhmatyuk, and his management.

Transferring the case to the police means that subjects of the case will never receive suspicions. The fact is that employees of Arsen Avakov refused all claims against Bakhmatyuk’s bank.

The Main Investigative Department and investigators of Kyiv police departments have previously investigated four cases regarding the VAB Bank. All these cases were closed. In the course of investigation, police investigators seized important evidence from banks. For instance, originals of loan cases.

What is even more interesting is that this evidence has decayed in basement of the forensic company due to the flooding. However, according to the internal instruction, all criminal cases after their closure should be stored in special premises without access of unauthorized persons.

It looks like the police initiated cases only to gather and bury the evidence.

Now, it is likely that the same investigators and prosecutors who have flooded some evidence will investigate the NABU case. We can not exclude the fact that the evidence collected by the NABU and the SAPO may also disappear under such conditions. Then, the state will finally lose the chance to punish those responsible and recover at least some part of stolen goods.

However, this is just one example worth 1.2 billion UAH. We can only guess how many similar destroyed cases there are.