Yesterday the Supreme Court of Ukraine shocked people with new statistics on punishment of bribetakers. Thousands of cases in court, hundreds of convicted and all this for half a year.

The best was, of course, the number of imprisoned – 121 bribetakers. Meaning, if to take weekends into account – it was almost everyday that some corrupt person was being thrown to jail for stealing budget funds.

The news caused many questions from the readers so we have to add it with some details.

The Supreme Court of Ukraine prepares such statistics regularly, however, we do not take it into account. Why? Because it is hard for us to understand the mathematical logic of those who make these tables. For example, here is one of them. If to count numbers in horizontal lines, one would see that only some of them will have final numbers correctly counted. In particular, instead of 469 we had 318. Those who like quests can also make a recalculation of the column 4. 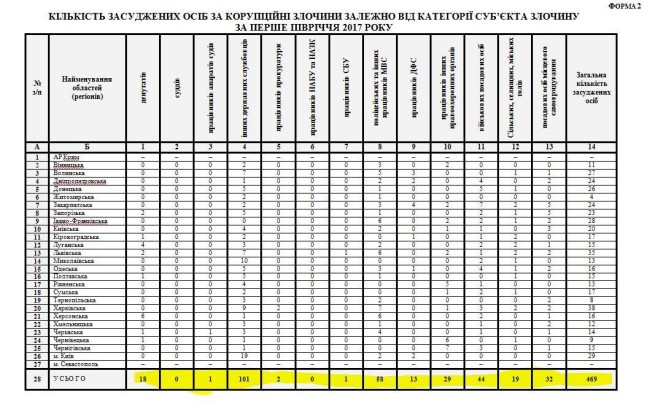 There is a problem with content. Let’s say, the Supreme Court says that the number of convicted judges was 0 in the first half of the year. This is hard to explain due to a court sentence of 17 March 2017 according to which the ex-head of the Ripkynskiy District Court in Chernihiv region judge Vasyl Shliakhov was sentenced to 5 years of imprisonment.

And the main thing. «Nashi Groshi» who read all court sentences on 5 main corruption articles (191, 364, 368, 369 and 369-2 of the Criminal Code of Ukraine) detected 74 imprisonment sentences but not 121 as the Supreme Court did. And this surprises us a little bit since the corruption articles that we do not monitor are either quite rare in the Register or have minimum punishment. And it would be hard to imagine that 37 people were imprisoned pursuant to them. It’d be nice to exchange the links to the Court Register with those who compiled the tables but they would hardly agree.

Since with certainty we can only talk about those cases that we read we would be taking into consideration 74 court sentences that we registered. So here it comes.

It was only 9 of them that ended with final decisions, the rest are waiting the appeal. In Ukrainian story appeal is important.

For example, there were two cases this year. In the end of 2015 ex-head of the Department for Material and Technical Provision of the State Border Service of Ukraine Oleg Lantvoit was sentenced to 10 years of imprisonment for taking a bribe in the amount of 349,000 UAH. And in summer of this year the Appellate Court of Kyiv cancelled the decision and acquitted Lantvoit. Another example. In February 2016 ex-Deputy Head of the State Inspection of Agriculture of Ukraine Ihor Nemyrovskiy received 10 years for taking 357,000 UAH as a bribe. And in April of this year the Appellate court of Kirovohrad region reduced the sentence from 10 to 3 years.

So, let’s say, yes, there are some peculiarities.

Third. Who was imprisoned and for what

This would be the best part. So. Those who are really imprisoned

Those who can be imprisoned (case is in the appeal)

Among those who received up to 2 years included: three employees of the State Forestry Service, Military commissar from Dnipropetrovsk region, the head of the Municipal Enterprise “Berezan Combine of Municipal Enterprises”, specialist of the department for social protection of Nemyriv District State Administration, the Head of an NGO, Chief Architect of Izum City Council.

Four accountants of the State Enterprise “Buskiy Forestry”, including the Chief Accountant, who for the period of 2012-2013 forged documents and appropriated 704,000 UAH of the state enterprise. They received 7-8 years each with confiscation.

Two senior operative officers on high-profile cases of the Directorate General of the State Fiscal Service in the city of Kyiv, who in April 2015 received a bribe from the firm for sending the containers. They received 6 and 7 years of imprisonment with confiscation of property.

Accountant of the “Donetsk Regional Bureau of Forensic Medical Examination” received 7 years with confiscation for embezzlement of funds of the enterprise in the amount of 371,000 UAH in 2015 which she put onto accounts of persons who were not working in the regional bureau.

Chief operative officer on combating economic crimes of Lubomlskiy District Police Unit of the Department of the Ministry of Internal Affairs in Volyn Region received 6,5 years with confiscation for extortion of bribes from 4 persons for covering up their illegal currency exchange activity and trading cigarettes without a license.

Head of Khoroshev village of Kharkiv district received 7 years with confiscation for extortion of 60,000 UAH as a bribe for distributing the land.

6 and 6,5 years each received the inspectors of Chekasy Penitentiary Colony who tried to smuggle cannabis and amphetamine for convicted. However, they were convicted to imprisonment pursuant to article 307 (illegal possession of drugs) and at all acquitted in corruption article 364.

A private person received 5,5 years with confiscation of part of property for the fact that he offered a bribe to police officers for not bringing him to criminal responsibility for illegal actions connected with narcotic substances. Along with this, accusation pursuant to a corruption article (2 years) was covered by more “severe” articles.

8 years and 7 months of imprisonment received the head of the unit of combating illegal drug trafficking of the Department of the Ministry of Internal Affairs of Ukraine in Poltava region who in 2012-2013 as a member of a criminal organization was selling drugs. Along with this, punishment pursuant to a corruption article (3 years) was covered by more “severe” articles.

Two ex-officers of the SWAT police units “Berkut” and “Gryfon”, two private persons received 10,5 and 11 years for the fact that they created an armed criminal group, appropriated money of people who exchanged currency in Kharkiv using firearms cold arms. They were all sentenced pursuant to a corruption article 364 (3-5 years), which punishment was covered by more “severe” articles.

And finally a conclusion

For the first six months in Ukraine there were only 9 people who were really imprisoned.

The most serious positions – the head of police unit and the deputy head of border control unit.

There are 65 people who might be imprisoned. The most serious positions – deputy head of the District State Administration, a judge, head of the village, chief city architect.

The truth is that these results are better than those of the last year , however, in how far this satisfies the demand of people for justice is for each and everyone to decide.