Looks like American lobbyists learned little from the Paul Manafort story. They keep taking on disreputable clients from Ukraine.

The large company Blue Star Strategies registered in American Senate as lobbyist for “National Interest of Ukraine”, a Ukrainian NGO. 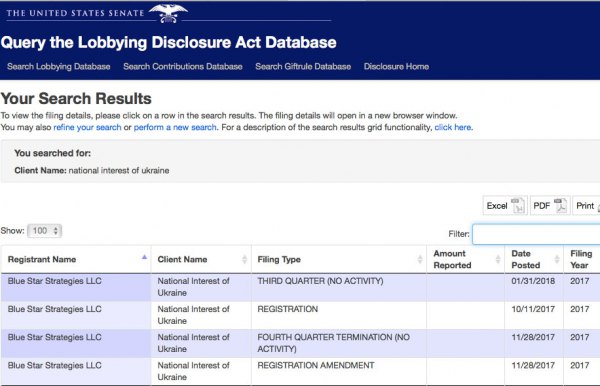 Organization by the same name is actively participating in the harassment of Vitaliy Shabunin and the Anti-corruption Action Centre.

It was “National Interest of Ukraine” NGO’s propaganda clip that Pavlo Pynzenyk, Martynenko’s associate, presented in Verkhovna Rada. The very Mr. Pynzenyk that recently lost the appeal trial to the Anti-corruption Action Centre and now has to publicly apologize to Daria Kaleniuk, Oleksandra Ustinova and Vitaliy Shabunin in the Parliament.

The lobbyist agreeing to contract for “National Interest of Ukraine” NGO is Karen Tramontano, CEO of Blue Star Strategies LLC. The registration is dated September 11, 2017.

In the attachment to the registration form, Blue Star Strategies stated its aim is “to raise awareness within the United States Government of “National Interest of Ukraine” NGO’s work, to promote rule of law and civil rights in Ukraine”.

The most interesting thing is that it is hard to find within “National Interest of Ukraine” NGO’s activities any work aside from discrediting Ukrainian anti-corruption activists.

The criminal investigation against Anti-corruption Action Centre was started for “non-payment of taxes” on the grounds of MP Pynzenyk’s report, itself based on “National Interest of Ukraine” NGO’s statement. After Pecherskyi District Court dismissed investigator’s request for holding a tax inspection of Anti-corruption Action Centre, the proceedings were transferred to Cherkasy Prosecutor’s Office.

There are no ground for the case transfer to Cherkasy. Anti-corruption Action Centre is registered in Kyiv, and it is operating in Kyiv; besides, the criminal case was initiated by Kyiv Fiscal Service, which is led, by the way, by Liudmyla Demchenko, MP Nina Yuzhanina’s close friend who is Ihor Kononenko’s protégé.

Why was the case transferred to Cherkasy? Clearly, it was done to facilitate any permissions to hold investigative actions. The Bankova has a kind of a flow line set up in Cherkasy. For instance, last year the second stage of fake special confiscation of Yanukovych’s money that was in Ukreximbank accounts was held there.

This is not the first time that Blue Star Strategies engages in the dirty job to undermine reputation of Ukrainian anti-corruption activists. On the eve of my trip to the USA in September 2016, I learnt that Blue Star Strategies was sending letters to various institutions calling them to avoid meeting me. Among other things, they distributed fake photos made in Photoshop.

In Yanukovych’s time, Blue Star Strategies was assisting Lyovochkin’s team – not declaring these activities in the US Congress or the US Ministry of Justice. Moreover, frontnews.eu site published an internal report by Yurii Stoliarchuk, Deputy Prosecutor General, about Blue Star Strategies representatives visiting him allegedly to make their apologies (!) for accusations of improper investigation of Zlochevskyi’s case.