Home Новини Half-year blockade of Donbas: how the contrabandists are operating and what they are feeding the Donetsk people - Investigation

Half-year blockade of Donbas: how the contrabandists are operating and what they are feeding the Donetsk people – Investigation 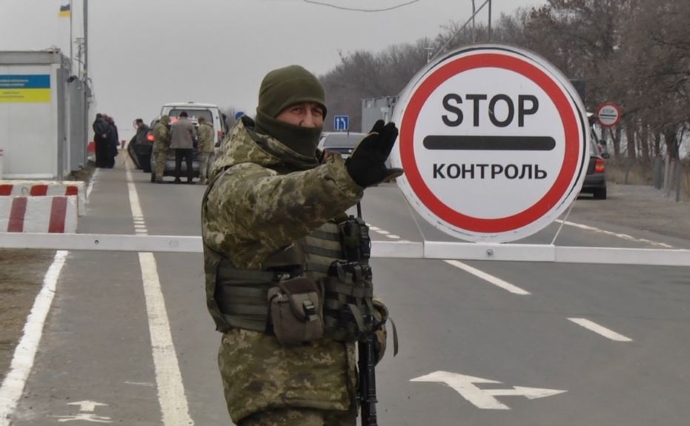 Half a year ago, on March 15, the National Security and Defense Council of Ukraine halted freight transport connection with the occupied territories of Donetsk and Luhansk regions. Now the authorities in Kyiv are waiting for the captives to be released and for the return of the “nationalized” enterprises. The authorities tried to distance themselves from DPR/LPR even more this summer – in July “Ukrenergo” announced that they would stop supplying electric power to the certain areas of Donetsk and Luhansk regions.

“Ukrayinska Pravda” journalists were trying to find out whether this blockade is truly working and what its consequences for Donetsk, Luhansk and Kyiv itself are.

The decision was made after the situation neared the boiling point in the Anti-Terrorist Operation zone at the end of 2016 beginning of 2017. Then the veterans of volunteer battalions backed by MPs Semen Semenchenko and Volodymyr Parasiuk set camp on strategic railway nodes.

Participants of the “bloody trade blockade” had been strengthening their redoubts in Lysychansk, Pokrovsk and Bakhmut area, periodically fighting off law enforcement attacks and accumulating fire arms and the Molotov Cocktails.

In the end, the President’s office on Bankova Street finally started paying attention to participants of the blockade who threatened to summon the “Railway Maidan”.

Mainly due to the problems with coal supply, jeopardizing energy safety of the country and broken technology chains in metal mining.

For the occupied Donetsk and Luhansk these protests of volunteer battalions came in handy in initiating of enterprise “nationalization”.

Only after the crucial for Ukrainian economy anthracite and metal mining assets of Rinat Akhmetov had been lost, did official Kyiv resorted to break off economic relations with the certain areas of Donetsk and Luhansk regions.

How much the breach in the defensive line is costing us

Six months after the NSDC decision have passed, yet the occupied part of Donbas is still not separated with “the iron curtain”.

First and foremost, due to the fact that a large percentage of the border between Russia and the certain areas of Donetsk and Luhansk regions hasn’t been sealed yet. Second, the border between Ukraine and DPR/LPR, stretching for 450km, and its so called “roads of life” proved to be very popular with contrabandists and corrupt officials.

Bulk batches of the products usually have difficulties crossing the block posts. Retail trade, on the other hand, is a totally different matter, being “permitted” even on the official crossing posts. Near the checkpoints, a kind of “delivery service” is in operation, that for a small fee of 50-300 UAH, depending on the kind and circumstances of the package, can transport practically anything. From 10 to 30 “delivery guys” can be found near one block post.

The “Ukrayinska Pravda” has information that this year on “Stanytsia Luhanska” checkpoint there was a case when it took ten “delivery guys” only three hours to unload ten tons of goods from the trucks and transport it via small carts to the uncontrolled territory.

“People aren’t searched thoroughly, unless they seem really suspicious. They can transport clothes, cigarettes, tea, coffee in their bags. Large bulk parties do not go through the block posts. There are separate roundabout tracks for trucks, for a separate fee. If one wishes to transport 10 thousand USD worth of goods, it will surely cost a few thousand”, – shared Andriy Panchenko, entrepreneur from Donetsk (not his real name – “Ukrayinska Pravda”).

Demand for the Ukrainian products in DPR remains high. Their share has decreased on the grocery warehouses, but not drastically.

“I doubt that the blockade had anything to do with that. It’s just that there may be consequences for the illegally imported produce. Everything must be imported through the customs of the “republic” and receive the according sticker. Therefore it makes sense to import only some specific product which is guaranteed to sell out”, – explains Donetsk citizen.

It is worth mentioning, that Roshen chocolate is readily available in Donetsk “under blockade”. Among other sweets suppliers also offer Kharkiv “Biskvit” and “Korona”.

Ukrainian alcohol is scarce, but there is reasonable supply of “Artiomovskoe” champagne or cheap “Inkerman” wines sold at prices of their Italian counterparts. Practically complete product lines of the brands “Veres” and “Chumak” are available, as well as the “Komo” cheeses.

As for electricity, despite the “Ukrenergo” decision, DPR/LPR do not go without. The occupied territories satisfy the demand by exploiting the two “nationalized” thermal power stations “Zuevska” and “Starobeshevska”, as well as power supplies from the pre-border regions of the Russian Federation.

According to several sources “Ukrayinska Pravda” has surveyed in the occupied Donetsk, the share of Ukrainian goods in shops and markets is approximately 25%. The share of local brands is about 40-50%. The rest is produced in Russia and Belarus, and their share is steadily rising.

“If consumers can choose between the Russian and Ukrainian products, they will choose the latter, – says Viktoria Markova from Donetsk. – There used to be numerous labels “Made in DPR” but now they are few and far between, as people are clearly not enthusiastic about them. That is why local products are often marked in Ukrainian, “Ukraine. Donetsk”, without translating them into Russian”.

According to Donetsk citizens, after the six-month-long blockade the life in the city is just as before – steadily complicated. It is not the quality of essential consumer goods that is troubling them, but the cost.

Inna Terekhova from Donetsk says that there are also problems with medicines in the city.

“It is better to transport them from Ukraine, – she says. – First, because of the price. For instance, we need to buy “Theraflex”. In Donetsk it costs 1600 RUB (800 UAH) for 60 pills, whereas in Ukraine it’s 572 UAH for 120 pills. Second, doctors themselves often recommend buying the Ukrainian ones, as recently there has been a rise in allergic reactions to the Russian medicines among the locals”.

“Nothing good has come out of it, we still haven’t reunited with Ukraine, – sums up Mykola Batrachenko, citizen of Lutugino of Luhansk oblast. – If there is a huge breach in the border with Russia, and one can import goods from there, or bribe to transport goods from Ukraine, that’s some freaking “blockade”! This topic, however, is expertly exploited by the Russian and “republican” mass media. People are constantly being told: “See, that’s what we warned you about – in Ukraine they are nothing but nationalists and punitive warlords! They want to starve you to death”.

Who’s got it the worst

After the blockade and “nationalization” of Ukrainian enterprises, the Donbas industry is suffering unprecedented hardships.

On the Kremlin’s orders, militants implemented “external management” for 40 large industrial objects, most of which used to belong to Rinat Akhmetov’s “SCM”. Those are predominantly mines and metal mining enterprises.

Now, according to Aleksandr Khodakovskiy (ex-officer of the Security Service of Ukraine and then brigade chief of separatist battalion “Vostok” and head of DPR’s National security council – Ukrayinska Pravda), the most promising and profitable enterprises are managed by an organization associated with the company “Vneshnetorgservis” which has Russian roots and registered in the unrecognized South Ossetia.

For the last six months, the new masters have been trying to organize production which was previously aimed at Ukrainian economy and market, as well as export. The distribution is not going so well, though.

First, because of the unrecognized status of DPR/LPR.

Second, Russia objectively needs neither Donetsk coal nor metal in the quantities sufficient for leading the industry of the certain areas of Donetsk and Luhansk regions out of stagnation. For instance, out of 55 coalmines, 34 are to be liquidated. The rest do not work to full capacity, payments are delayed, staff made redundant, number of working days reduced.

One of the major consequences of the six-month-long “nationalization” and blockade is that we have been losing industrial potential (of the certain areas of Donetsk and Luhansk regions), – Yuriy Grymchak, Deputy Minister of temporarily occupied territories, told Ukrayinska Pravda. – The situation is not to be taken lightly, especially considering that we are going to get these territories back, eventually. Plants and their equipment are taken apart for scrap metals, coalmines are flooded and they will be impossible to restore”.

Grymchak reminded that since the beginning of war separatists have made several attempts of their own to block transport communication.

In 2016, during Minsk negotiations DPR/LPR representatives actually demanded from the Ukrainian enterprises to go through additional registration so that they would make tax contributions to the “budget” of the pseudo-republics. It was not done, save a few exceptions. Since as far back as 2014 some companies and entrepreneurs made a choice to pay double taxes for safety reasons.

Now, according to Grymchak, at least 136 thousand people in DPR/LPR have problems with employment. Not long ago they worked for companies with Ukrainian registration, now they get payed their salaries in tranches by their new managers.

“As a consequence of the blockade, the state budget has incurred losses. We lost significant amount of wartime tax, paid by those working on plants and factories under Ukrainian jurisdiction. GDP growth decreased by about 1.5%. As for the political outcomes, Russia incurred no liability on the international level for enterprises it took away from Ukraine”, – recapped Grymchak major outcomes of the blockade for Ukraine.

In the last six months, the official Kyiv clearly failed to achieve its goals in Donbas.

All the announced by the NSDC blockade did was to appease the so-called “patriotic forces” and gave the President’s office a break until the new political and heating season.

One real consequence is that the “republics” are growing further and further apart from Kyiv. Along with ideologically manipulated citizens with Ukrainian passports.

Whether Ukraine would ever win in this battle for citizens’ minds, is doubtful. Anyway, it will be every bit as hard as to rebuild/restore/repair industry on the occupied territories.