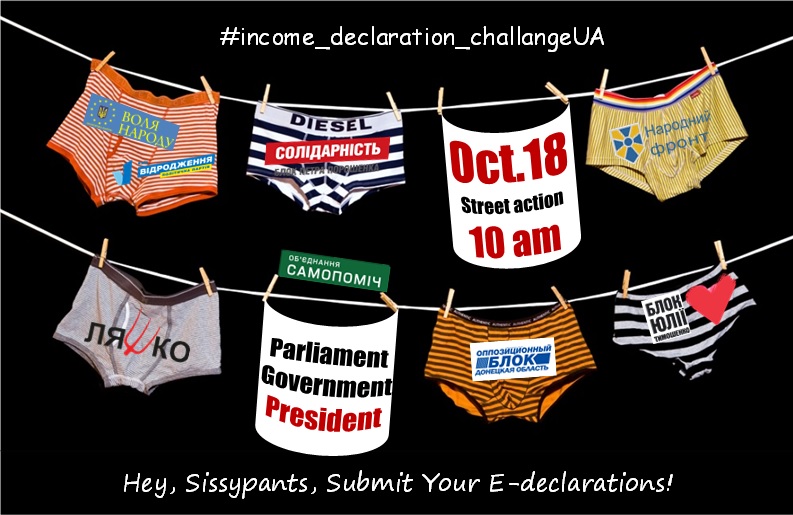 Activists to start demonstrations in front of the Parliament, the Cabinet of Ministers and the Presidential Administration: “Hey, Sissypants, Submit Your E-declarations!”

Series of demonstrations will take place in front of the Parliament, the Cabinet of Ministers and the Presidential Administration on Tuesday, October 18, at 10:00.

The activists of anti-corruption organisations will be handing out “personal panties” to the MPs and other public officials, who have not submitted their electronic declarations yet.   The activists would urge them not  to be “sissypants” and  “cowards”  and accelerate the wealth declaration as it is required by law.

The deadline for submission of electronic declarations expires on 31 October. As of 13 October,  there are approximately six and a half thousand annual declarations in the Unified State Register of Declarations. This is only 13% of fifty thousand officials holding top management positions who have to declare their assets during so-called “first wave” of declaring.

Currently, the Registry does not have the declarations of either the President or the Prime Minister or the Speaker of the Parliament.

The activists have prepared for them “personal panties” that will hang in front of government agencies windows during the demonstrations to remind politicians once again: the one who does not declare is the one who has something to hide.  The activists will set similar  art installations of  hanging “personal panties” on the square in front of Parliament and in front of the main entrances to the buildings of the Cabinet of Ministers and the Presidential Administration from the Institutska Street.

The organisers want to show voters that the top management of the country intentionally avoids submitting  the electronic declarations expecting some kind of miracle. The activists urge the top officials not to be sissypants and cowards, not to wait for “the go-ahead from the top” sign and begin immediate work on the submission of e-declarations. This is the only way the Ukrainian authorities can clearly demonstrate their voters and international partners the readiness to fulfil the European requirements on transparency and accountability as well as their commitment to their obligations in the sphere of combating corruption.

Before the demonstrations at 10.00 in front of the Parliament, there would be a briefing held by organisers of the demonstrations: the representatives of Anti-corruption Action Centre, AutoMaidan, Transparency International Ukraine, Centre UA, the Reanimation Package of Reforms, and Civil Lustration Committee as well as MPs who have already submitted their annual electronic declarations.

We look forward to the attention of the journalists and hope for their assistance with the coverage of the problem of the weak process of declaration of the revenues and expenses by the top officials. More information is available with the Press Service of the Anti-corruption Action Centre at 067 622 71 12.