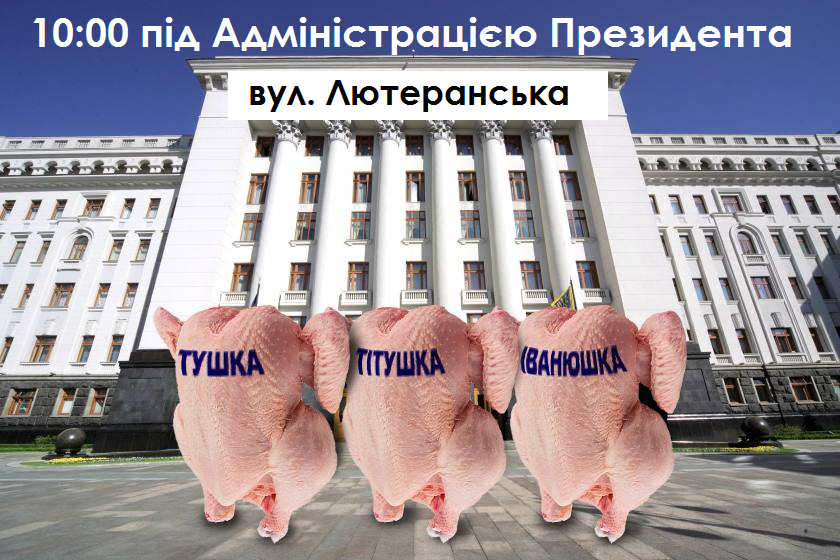 Today, on 3 March, the EU lifted sanctions from Yuriy Ivaniushchenko (aka Yura Yenakievsky), who used to be a close associate of Viktor Yanukovych, one of the key “suppliers” and funders of “titushky” during Euromaidan. Titushky were crippling and killing activists during protests.

On Monday, 6 March at 10 am the activists will bring the President Petro Poroshenko thank-you gift from Yuriy Ivaniushchenko in the form of bloody chicken corpses (which are “тушки” in Ukrainian, rhyming with titushky “тітушки”, the nickname given to hired criminals and hooligans who were chasing and beating protesters during Euromaidan events).

Activists will thank Poroshenko with rotten chicken corpses for sanctions being lifted from Ivaniushchenko and millions of dollars not confiscated from his accounts.

Together with other cronies from Yanukovych’s gang, Yura Yenakievsky was included in the EU sanction list. However, in three years three Ukrainian General Prosecutors could not prove the guilt of Ivaniushchenko.

Due to the absence of criminal proceedings regarding abuse of office or misappropriation of public funds by Ivaniushchenko, the EU removed him from the sanction lists, as it is stated in official EU press release.

Before the direct action, there will a press briefing held by anti–corruption activists from the Anti–corruption Action Centre, Automaidan, Transperecny International Ukraine, MPs, and other civil activists.

The role of Yura Yanakievsky during the Euromaidan events was not properly investigated by the GPO. The only two criminal cases (that were later dumped by prosecutors) were opened thanks to appeals made by the Anti-corruption Action Centre.

In particular, in the case of illegal enrichment regarding 72 million Swiss francs, which were found in his accounts, Ivanyuschenko received notification of suspicion (meaning official charges). Since the moment of issue of notification, there were few investigative actions carried out by the GPO, the indictment was not prepared. As a result, lawyers asked the court to close criminal proceedings against Ivaniushchenko.

On 27 January 2016, the court ordered the prosecutors to close the case. Such a decision can not be appealed. However, during the year the GPO tried to challenge it under made up causes. On 16 February 2017, the Supreme Court finally dismissed the GPO’s attempts to cancel the former decision of the court.

Currently, the only obstacles on Ivaniushchenko’s way to status of “respectable businessmen” are the EU sanctions, which have been lifted from him today due to the absence of the criminal proceedings in Ukraine..