Among those who became hugely wealthy during Yanukovych presidency is Mykola Zlochevskyi. As Minister of Ecology he grew his business, the Burisma Group, into one of the biggest private gas producing companies in the country. Licenses for gas deposit exploitation benefitting Zlochevskyi’s companies were approved by his Ministry.

He fled the country after Maidan, but in three years since, his business is still running smoothly. Zlochevskyi is no longer wanted, criminal proceedings against him have been closed by the prosecutor’s office one by one.

Such decisions are not usually taken without consent from the country leaders.

Maybe the president’s inner circle is interested in the stability of Zlochevskyi’s business in the exploration of and selling of gas in Ukraine, the legitimacy of which is questionable?

Journalists of “Schemes” TV-progamme, the joint project of “Radio Svoboda” and “UA:Pershyi” channel have got access to the reports of Burisma Group for 2016 and analyzed who buys gas from Zlochevskyi’s companies.

Back in 2009, there was only bare forest was between Vyshorod and the village of Khotianivka near Kyiv. In one year, on the site of felled trees, a huge construction project began on Kyiv Reservoir.

As Minister of Ecology in the Azarov Government, Mykola Zlochevskyi started building his future “fortresses” there. He moved here about a year before Maidan.

How did Mykola Zlochevskyi enrich himself?

On the one hand, Zlochevskyi was the Head of the Ministry of Ecology and Natural Resources. This position endowed him with the responsibility for granting access to, and permitting the extraction of Ukrainian sub-soil resources. On the other hand, Zlochevskyi was the owner of a business which received gas extraction licenses at several sites across Ukraine. These licenses were issued with numerous legal violations, including the lack of auction or competition.

Thus, once in an influential position, Zlochevskyi built his own super-profitable business into one of the biggest gas extraction private companies in Ukraine –the Burisma Group. He even invited former-president of Poland Oleksandr Kvasnevkyi and the son of former US vice-president Hunter Biden onto the Board of Directors. 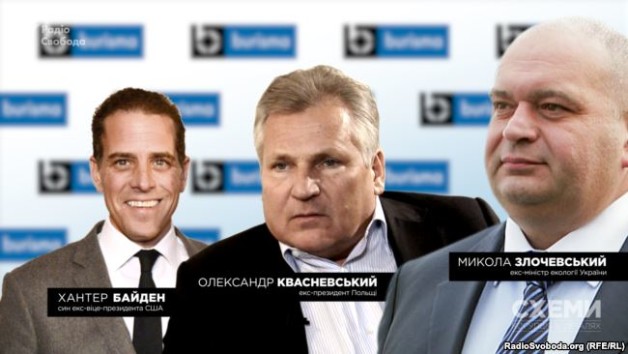 “There is very clear evidence that companies associated with Zlochevskyi did not file one important document – that stating the approval of local community. Is this a violation? Yes, this is total violation.” states Yaroslav Yurchyshyn, the Head of Transparency International Ukraine. Yurchyshyn believes that a court appeal, to cease the activities of such companies, based on the lack of this document would be possible.

What was Zlochevskyi’s fate after Maidan?

After the Revolution of Dignity Zlochevskyi fled Ukraine. His “fortress” on the Kyiv dam is still empty.

Law enforcement agencies started several criminal investigations against the former minister and his companies. Yet, almost three years of investigation have come to nothing. Zlochevskyi’s business is still running like clockwork.

Today, the Burisma Group’s companies continue to extracting Ukrainian gas in 5 regions at 8 sites, while Zlochevskyi is navigating his “issues” with law enforcement both in Ukraine and abroad. A London court lifted the freezing of $23,5 millon in Zlochevskyi’s accounts by the UK Serious Fraud Office because the Ukrainian Prosecutor’s office had not provided evidence that these funds had come from illicit sources.

“The proceedings, begun in the UK were not investigated in a normal, professional and independent way by Ukrainian Prosecutor’s office. The investigation was dropped, possibly with the involvement of a political negotiations”, states Daria Kaleniuk, executive director of Anti-Corruption Action Centre.

The Ministry of Internal Affairs removed Zlochevskyi from its wanted list. The General Prosecutor’s Office initially investigated Zlochevskyi’s alleged illicit enrichment, but shifted its investigation to that of a more minor offense, tax evasion, and eventually closed the case in 2016.

Recently, the Burisma Group cheerfully declared that all proceedings against Mykola Zlochevskyi and his companies in Ukraine had been closed, thanks to the payment of 180 million UAH additionally charged taxes.

“The decision to fully close all pending legal proceedings and criminal allegations was the result of many months of full cooperation between the Office of the General Prosecutor and the legal team representing the Burisma Group”, the company stated.

Experts at Transparency International and the Anti-Corruption Action Centre who were monitoring the investigation from the beginning, believe that the General Prosecutor’s Office’s closing of criminal cases against Mykola Zlochevskyi and his company was the result of “political negotiations”.

Zlochevskyi and his companies are, however, still the subject of interest for two other Ukrainian agencies, the National Anti-Corruption Bureau (NABU) and the newly-created Specialized Anti-Corruption Prosecutor’s Office. The latter of which is trying to cancel the Burisma Group’s gas extraction licenses through the courts. This however, has not been with success. Recently, the petition was rejected was rejected due to the failure to abide by the half-year deadline for its submission.

Lobbing at the highest level?

Who exactly in the post-Maidan government permitted the whitewashing of this former official from the Yanukovytch era, who built himself a corrupt fortune in power?

These photos were recently published by Ukraininan journalist Olha Vasylevska. Two men, who resemble Ihor Kononenko and Mykola Zlochevskyi, are seen meeting in Vienna. What could possibly have been discussed by president Petro Poroshenko’s closest associate, and a defendant in several criminal cases, also a previously close associate of Viktor Yanukovych?

It is no secret that Zlochevskyi’s cases in Ukraine were investigated by the investigative department dealing with severe economic crimes in the Prosecutor General’s Office, which is informally dubbed the “Department of Kononenko-Granovskyi”, referring to two MPs from the Petro Poroshenko Block. Ihor Kononenko and Vadim Granovskyi’s influence on the Prosecutor General’s Office, which is headed by Yuriy Lutsenko has been detailed in numerous media investigations. Inevitably, the publication of these photos has only increased suspicions that the closing of cases against Zlochevskyi, incorporated some sort of political agreement. Yet, what is the benefit for the government and the president’s inner circle?

Those with stakes in the gas market suggest that Mykola Zlochevskyi could give up part of his business in exchange for immunity from prosecution. However, analysis of his companies’ ownership structure does not lend credence to these rumors. Zlochevskyi remains the sole benefactor of the Burisma Group, as far as public official documents suggest.

So, why is the extraction and selling of extracting and selling of gas by Zlochevskyi’s companies is beneficial for president’s inner circle? Maybe they are buying it for the needs of their own business?

“Schemes” got access to the reports of the Burisma Group’s companies for 2016 and analyzed who buys gas from Zlochevskyi’s companies. Their suspicions were confirmed.

A “Schemes” crew travelled to the Pylypiv gas deposit in Ivano-Frankivsk region. It is the place where the limited liability company “Pari” extracts gas and supplies it to plants and different companies.

LLC “Pari” is one of four gas extracting companies of the Burisma Group, it is fully owned by Mykola Zlochevskyi. Who buys gas from this company?

This company has sold gas for 270 million UAH in 2016. Some was sold to the companies of the Burisma Group for further resale.

The rest of the gas was delivered directly to real VIP-clients, companies of the President Petro Poroshenko, MP Igor Kononenko and Deputy Secretary of the National Security and Defense Council Oleg Gladkovskyi.

“Piskivsk Glassware Factory” in Kyiv region. Its owners are the funds “Prime Assets Capital” and “Vik”, which belong to Poroshenko and Kononenko respectively. Сonstant gas supply to the factory is a guarantee of sustainable production. The factory was buying gas from LLC “Pari” during 2016 and paid almost 100 million UAH for it. 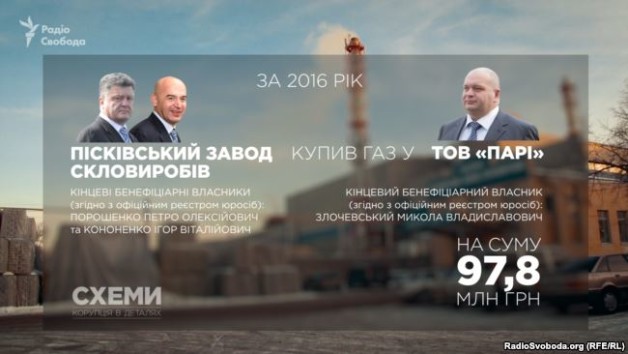 “International Tennis Academy” in Puscha-Vodytsia in Kyiv. It was founded by Ihor Kononenko’s fund “Vik”, and his son Vitaliy works here. The sports facility is also supplied with gas from Zlochevskyi but only for heating and domestic needs. Last year Zlochevskyi’s company received more than one million UAH from Kononenko’s facility. 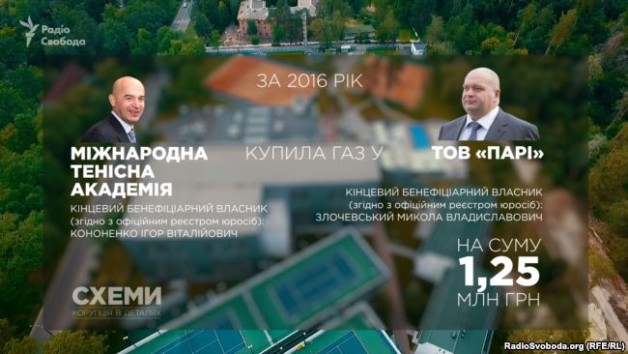 “Sports and recreation complex “Monitor” is better known as the luxury fitness club “5th element”. Three business partners founded it – Poroshenko, Kononenko and Gladkovskyi. It is one of the most famous assets of the President and his associates and it is also supplied with Zlochevskyi’s companies gas. In 2016, the fitness club bought gas for more than 2,5 million UAH. 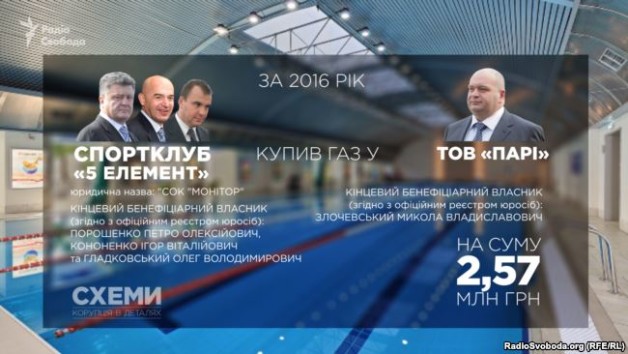 Thus, three companies of the President of Ukraine and his business partners paid to Mykola Zlochevskyi’s company more than 100 million UAH in 2016 alone.

At least several dozen companies, which are extracting and selling gas on such a large scale exist in Ukraine. But firms of top officials are buying it from the Burisma Group, owned by Mykola Zlochevskyi, former Minister in the Azarov’s Government, who fled Ukraine under the threat of criminal investigation. Ukrainian prosecutors did not manage to cancel his “gas” licenses, issued with numerous violations. What is this – just business? Or a consensus in favor of corruption under mutually agreed conditions?

All mentioned persons and companies received letters with with the request to comment on the information in the story.

Deputy Secretary of the National Security and Defense Council Oleg Gladkovskyi made the following comment: “Right after my appointment to the

state service I resigned from all governing boards of all companies. I am not taking any managerial decisions and have withdrawn from business activities”.

Ihor Kononenko commented on the information: “I inform that I am not performing management of mentioned companies. I do not have neither indirect, nor direct control over their economic activity. I ask you to apply to the correspondent companies with this issue”

Kononenko’s “International Tennis Academy” stated that they do not have any contractual agreements with LLC “Pari” for now. But they also did not refute the fact that they bought gas from Zlochevskyi’s company in 2016.

The reply for question on the duration and conditions of cooperation with Zlochevskyi’s companies of Piskivsk Glassware Factory was the following: “In order to reach highest financial results company has the right to choose the best offer among number of supliers, using many criteria including price… The disclose of commercial secret is unfeasible for the company in order to maintain effective high level competition on glass containers market”.

Other mentioned persons and companies did not reply on the request. Editorial team is ready to publish their position.

Authors of this material were using youcontrol as one of the information sources. Data from this resource is confirmed by official state registers.