Home Новини Fairytales for MPs: what Venediktova lied about in her speech in the Verkhovna Rada 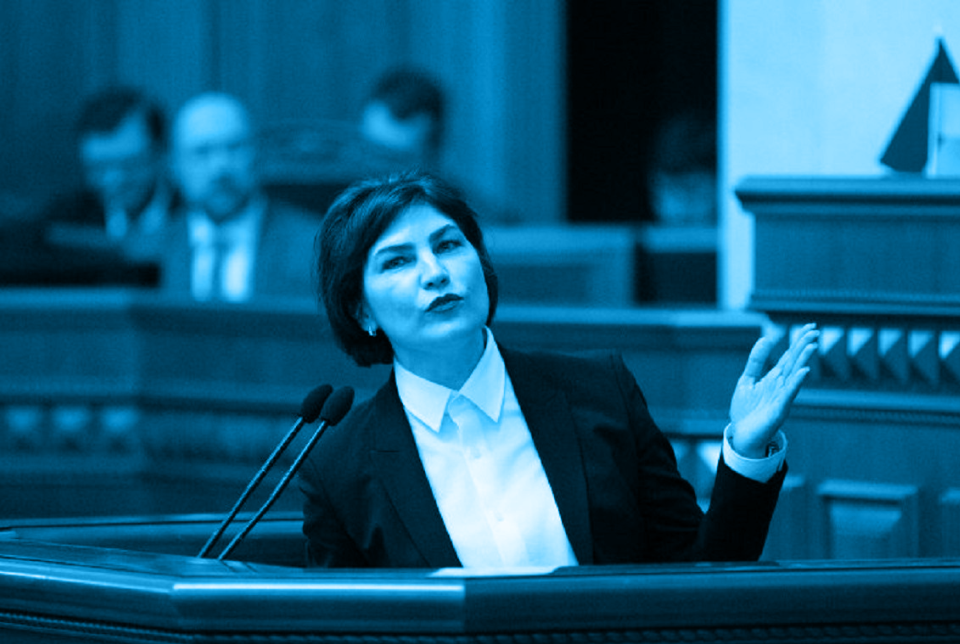 And on February 18, Venediktova reported to the Verkhovna Rada of Ukraine on her work for the past year. She, like one of her predecessors Yuriy Lutsenko, tried to give out desirable for valid by telling a lot of lies and manipulating.

In order not to make baseless claims we’ll refute the number of her direct quotations, which do not coincide with reality.

“I joined the case regarding “Pryvat” as the prosecutor on January 11, 2021. There is no subject in this process, especially mine. I can’t block… Until the New Year I held three joint meetings with detectives of the NABU and prosecutors of the SAPO. We have full understanding with them regarding these cases… It is impossible not to conduct examinations, because examination is exactly the document that establishes damages“.

Firstly, Iryna Venediktova does not know herself when she “got into” the case. Earlier, she wrote on Facebook that she had been included in groups of prosecutors in three main proceedings related to Pryvat group on December 14 last year, but not on January 11, 2021. It was confirmed by the NABU director Artem Sytnyk in the interview.

Secondly, the Prosecutor General hints that some more examinations are needed in the case of Pryvatbank. This is not true. In the same interview Artem Sytnyk confirmed that detectives had gathered all necessary evidence and that it was enough to announce suspicions, and that draft suspicions had already been sent to the Prosecutor General’s Office.

According to the interview, examination has already been conducted. At the same time, in practice the appointment of additional (in fact unnecessary) examinations is often used, on the contrary, to delay time or dump cases.

By the way, there is opinion that the time during which Venediktova blocked handing over of suspicions, former owners of Pryvatbank Igor Kolomoyskyi and Gennadiy Bogolyubov used to initiate lawsuits with the United States by accusing them of expropriating investments of Ukrainian citizens in American commercial real estate. The lawsuit is based on absence of any charges in Ukraine.

This is about illegal decision of the judge Sergiy Vovk from Pechersk District Court of Kyiv, who ordered Venediktova to take the case from the NABU and transfer it to “another pre-trial investigation body”. This decision was made in favor of deputy head of the Presidential Office Oleg Tatarov, who had been suspected of helping transferring bribes. Deputy of Venediktova executed this decision and transferred the case to the SBU.

Iryna Venediktova, as the Prosecutor General, cannot but know that the Article 33-1 of the Criminal Procedure Code stipulates that consideration of any complaints, statements and appeals in the NABU cases is conducted in the High Anti-Corruption Court. When they appealed against illegal decision of the judge Vovk in Kyiv Court of Appeal, the Prosecutor General knowingly and intentionally played into hands of defendants in the case. And now, when this decision is legally appealed in the Appeal Chamber of the High Anti-Corruption Court, prosecutors of Venediktova are trying to prevent it, even asked not to consider complaints.

We are not talking about the fact that Venediktova and her deputies, according to their powers, could not transfer the case from the NABU to the SBU, but leave everything in its place. After all, definition of the jurisdiction is sole discretion of the prosecutor. But, as we see, in fact, they needed transfer itself.

“Regarding the case “Rotterdam +”. The case is being investigated by detectives of the NABU, the procedural guidance of prosecutors of the SAPO. That is why I have great respect for the anti-corruption infrastructure, I have great respect for their independence. And when terms of the pre-trial investigation are over or there is one day left, then, sorry, colleagues, I think that the new head of the SAPO should investigate this case directly … Because the HACC twice answered the question of how much the group can be changed or not , and the HACC made the decision regarding this”.

At first, we should remind you that the prosecutor of the SAPO Vitaliy Ponomarenko closed the case twice. For the first time he closed it when he had examination in hands, which had established 18.87 billion UAH of losses for the first two years of existence of formula. And he knew for sure that new examination is being prepared for the entire duration of “Rotterdam +”. For the second time he closed it when he had new examination, which confirmed 39.9 billion UAH of losses.

For the first time the case was reopened by the High Anti-Corruption Court. For the second time the case was reopened by acting head of the SAPO Maksym Gryshchuk. However, only actual head of the SAPO (where the competition has just begun) can change the prosecutor in the case, or the Prosecutor General Iryna Venediktova washes her hands in this case.

Anyone who follows her at least a little can see inefficiency of the prosecutor Ponomarenko, even the threat of his actions in the case. The NABU sent the appeal to the Prosecutor General with the request to replace Vitaliy Ponomarenko. But Iryna Venediktova decided to shift responsibility to the head of the SAPO, whom we will have to wait at least few more months.

She also hinted that detectives of the NABU allegedly delayed the case until the expiration of terms of the investigation. But this is outright manipulation. The fact is (and the head of the NABU Artem Sytnyk spoke about it) that the case should have been in the court a long time ago. But if the prosecutor closes it twice at the finish line, then what can we talk about?

At the end of the third quote, the Prosecutor General says that the court allegedly twice refused to change the group of prosecutors in the case. We again face incompetence or deliberate manipulation. The court may remove the prosecutor only if there are grounds according to the law. The Prosecutor General may do so due to inefficiency. When Vitaliy Ponomarenko closes the complete case twice, and this decision is cancelled twice, this is inefficiency. The HACC twice did not suspend prosecutor of the SAPO from the case, because the law does not provide the court with such ground as inefficiency. This is prerogative of high-level prosecutors, namely, Venediktova herself. And apparently, she deliberately does not use this opportunity and does not suspend Ponomarenko.

“There is no blocking of cases. The suspicion is announced only when there are legitimate grounds for it. And then we can trace each suspicion in the framework of the pre-trial investigation and then in the trial”.

In fact, Venediktova showed outstanding result in blocking cases, even with the help of various know-how. To be more precise, the anti-result.

In July 2020, Venediktova I. refused to open criminal proceeding against Member of Parliament of the party “Servants of the People” Pavlo Khalimon. This was requested by detectives of the NABU basing on serious evidence, namely, audio recordings where Khalimon allegedly demands bribe from agribusinessman. The the Prosecutor General’s Office stated: “…there are no grounds, that are specified by the CPC of Ukraine, for entering the regarding information”.

The blocking of cases includes the fact that Venediktova either does not know the law or deliberately violates the Criminal Procedure Code when determines the jurisdiction. In particular, prosecutors do not transfer cases to the NABU that are directly under the jurisdiction of this body. Because of this courts cancel suspicions in such cases. The latest example was abolition of suspicion to the person who had wanted to become the head of the Main Directorate of the National Police of Rivne region for the bribe in the amount of 1 million USD.

How else, except blocking, can we call the fact that the Prosecutor General’s Office has been refusing to send the appeal to Austria during four months regarding the extradition of agrobaron Oleg Bakhmatyuk, who is suspected of embezzling 1.2 billion UAH from VAB Bank. The NABU has repeatedly asked Venediktova to do this, and she has repeatedly stated that documents are allegedly out of order. When we know Venediktova’s “interest” in Bakhmatyuk, which also appeared in closure of the case in summer 2020 (fortunately, the High Anti-Corruption Court saved the case), such delays regarding extradition may indicate bias.

And the day before her speech in the Parliament, during the meeting of the Verkhovna Rada Committee on Law Enforcement Iryna Venediktova clearly demonstrated her ignorance of basics of the criminal process.

Member of Parliament of the party “Golos” Oleksandra Ustinova criticized Venediktova for the fact that the court closed the case (in fact, it cancelled the suspicion. – Author) regarding bribe in the amount of 1 million USD to the general of the police precisely because prosecutors and investigators violated the jurisdiction, because the case should have been considered not by the police but by the NABU. And Venediktova stated: “If we transfer all cases according to the jurisdiction to the NABU by amount and subject now, then they will have no place where to put them all. That is why there are now cases when the jurisdiction is violated for various reasons”.

In fact, such position simply closes all issues we have raised in this text. Because if the Prosecutor General believes that the law can be violated so easily, even directly and without any remorse to tell about it to Members of Parliament from the Committee on Law Enforcement, then what else we can demand of her.

Iryna Venediktova does not really know the case law (for instance, decision of the Supreme Court in case №563/1118/16-k as of September 30, 2020), which states that if the case is investigated by the wrong body, the evidence may be declared inadmissible. After all, this is significant violation of human rights and fundamental freedoms. That means that the prosecutor is obliged to transfer all materials and instruct the pre-trial investigation to the authorized body. It seems unnecessary to Venediktova.

We do not know whether anyone “suggests” to the President Volodymyr Zelenskyi that Venediktova is effective Prosecutor General, or whether he himself thinks so.

But in both cases he shows the level of his competence and lack of understanding of processes.

During almost one year of her leadership at the PGO, she has done so much to dump cases of top-level corruption and sabotage of justice that every citizen can see it with the naked eye. But for some reason the President does not see it.

After all, he was going to draw conclusions after the New Year. Report of Venediktova, that included many lies and manipulations, could be the last straw.

And as long as the Presidential Office of Zelenskyi tolerates Venediktova, justice in Ukraine will exist only for his own people.

There are many Presidents but there is only one KDAC. How Pavlo Vovk became the most notorious judge of the decade

Anti-reform according to secret instructions of the SBU. Which of Members of Parliament submitted amendments from Bakanov