Elderly Women, Children and Police Were Brought to SAPO Today to Defend Kholodnytskyi 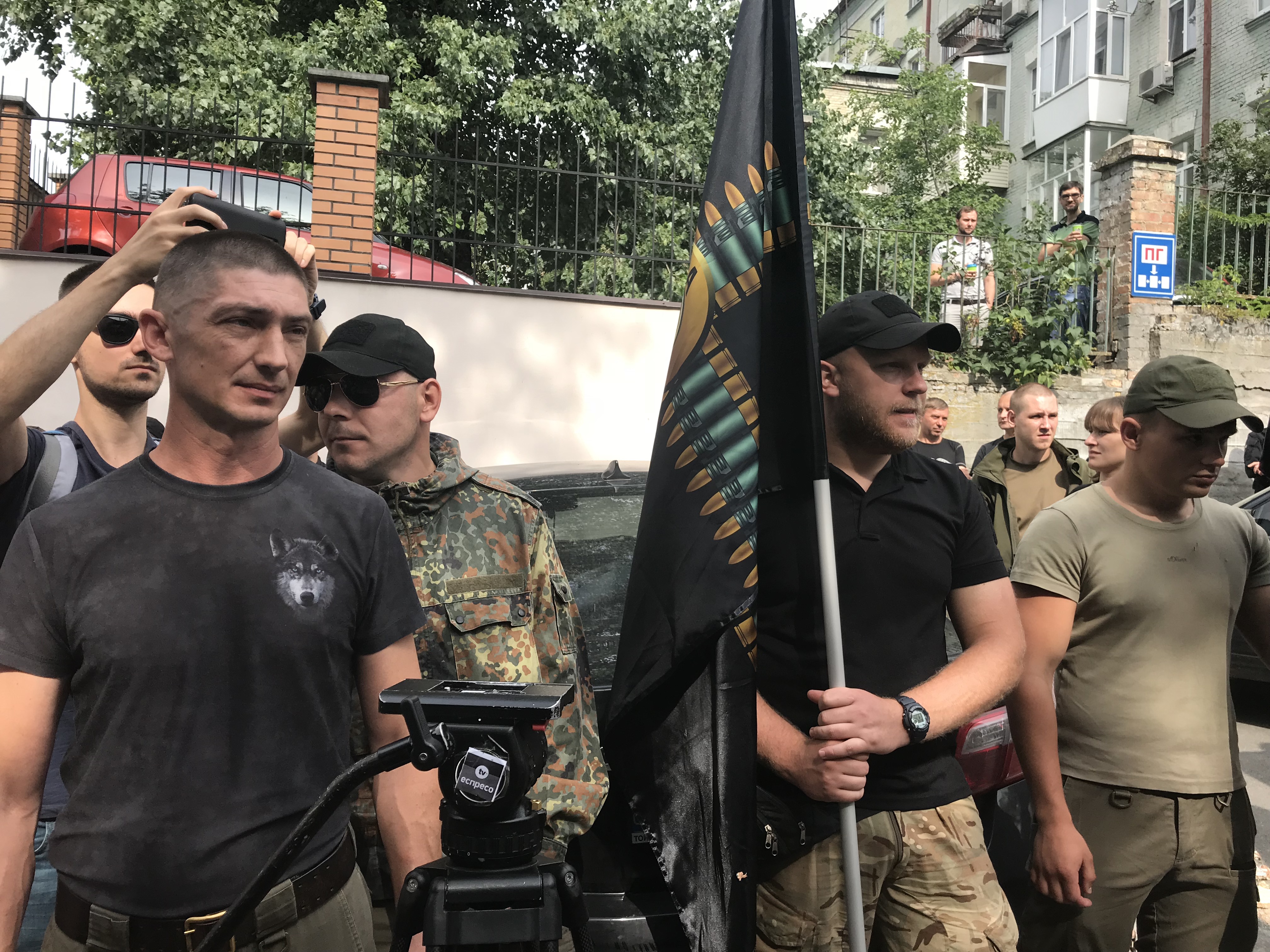 Today, on July 17, elderly women, children and police were arranged to the SAPO to defend Nazar Kholodnytskyi.
There were a few buses with police officers at the direct action campaign, as well as a lot of representiatives of the police dressed as civilians. Specifically, when one of them was provoking the activists, the other defended him. Later on he showed his police ID. 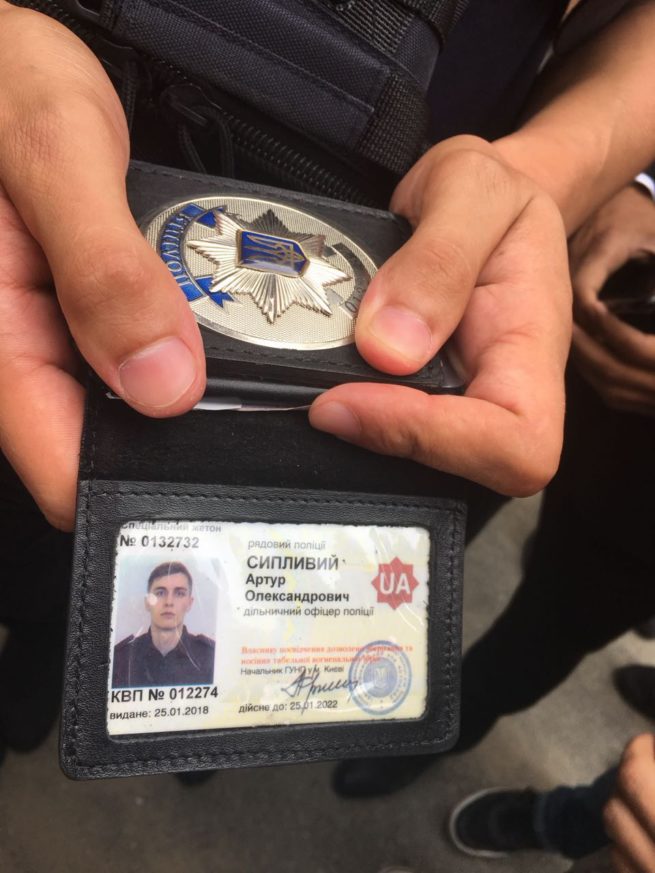 Also at the action there were youngsters, who told “they were working”. Moreover, one elderly lady confessed she joined the rally for 80 UAH (3 USD).

Most of them were holding posters “NABU is corruption”, “Stop interferring in Kholodnytskyi’s work”, “Sytnyk is an enemy for Ukrainian people” etc., but could not really explain why they came to the SAPO. 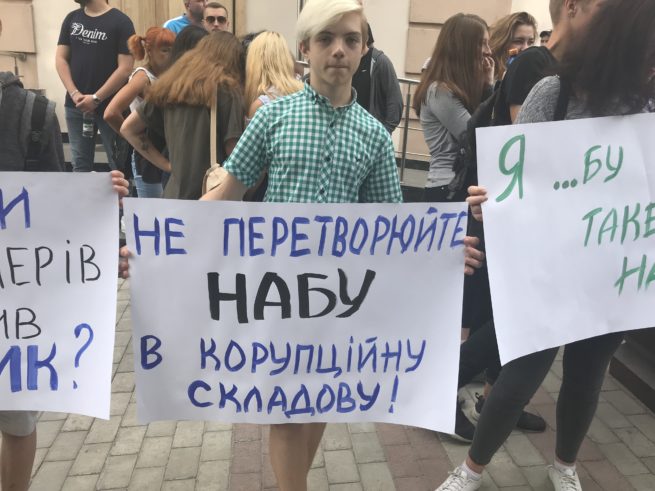 The campaign calling for Kholodnytskyi’s resignation​: “P​ack your stuff and go out!” was scheduled for 9:30am by the activists of the Anticorruption Action Center, the Automaidan and the Non-Indifferent Declaration. Starting from 9am elderly women with the flags of the Socialist party and posters gathered near the SAPO. Later on arrived the party leader and former police official Illia Kiva, who is close to the Minister of Internal Affairs Avakov. He was accompanied by the police officers dressed as civilians. 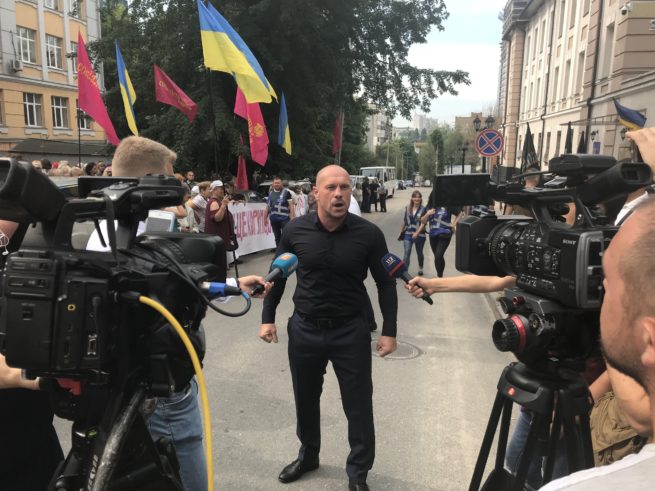 As soon as Vitaliy Shabunin arrived for the planned event, the unknown in camouflage poured a green liquid in his eyes and threw at Shabunin Roshen cakes. The police did not rush to stop provocateurs though they were not even trying to hide.
At the hospital Shabunin was diagnosed a corrosive burn of both eyes.
Later on, a pseudo-journalist Vsevolod Filimonenko, who is suing Vitaliy Shabunin, also joined the provocateurs’ rally. He arranged elderly ladies and defiantly, in front of cameras, allegedly paid each of them 100 UAH for their support of Shabunin in campaign against Kholodnytskyi. Moreover, they brought posters with the same slogans as activists had (activists posted placards on social media an evening before). 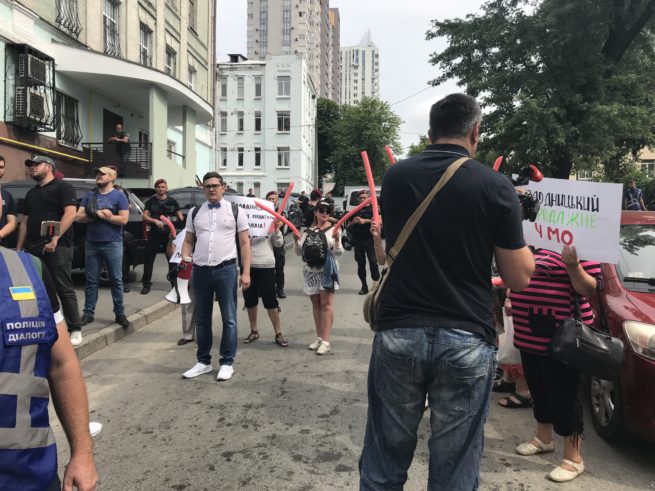 Despite the provocations, the activists conducted their direct action campaign, but the Head of the SAPO did not go out to take a backpack and even closed up in the office.
We would like to remind that last week the Specialized Anti-Corruption Prosecutor’s Office closed the proceeding in the “case of backpacks” regarding two subjects – the son of the Minister of Internal Affairs Oleksandr Avakov and the former Deputy Minister Serhii Chebotar due to the absence of “direct sufficient evidence”. This caused a great resonance in the media as just recently Nazar Kholodnytskyi stated that there is enough evidence against Avakov’s son.
It should be noted that this is not the only case which SAPO Head Nazar Kholodnytskyi “closed”. On tape recordings from his office, there is evidence that he warned about searches and instructed the subjects of criminal proceedings that are considered by his prosecutors. He instructed what to do in order to avoid punishment.
In particular, it concerns the bribe of the acting Minister of Health Ulana Suprun, Mayor of Odesa Gennadiy Trukhanov, ex-head of NACP Nataliia Korchak, and MP Georgiy Logvinskyi. It also became known from the wiretapping in his office.
On July 26, the Qualification and Disciplinary Commission of Prosecutors will consider the case of Nazar Kholodnytskyi, according to the results of which he should be dismissed form his position as required by law. Activists will demand him to resign.
Share the news