Home Новини Due to the lifting of EU sanctions from crony of Yanukovych Yura Yenakiyevskyi Ukraine lost 5.4 billion USD - activists

Due to the lifting of EU sanctions from crony of Yanukovych Yura Yenakiyevskyi Ukraine lost 5.4 billion USD – activists 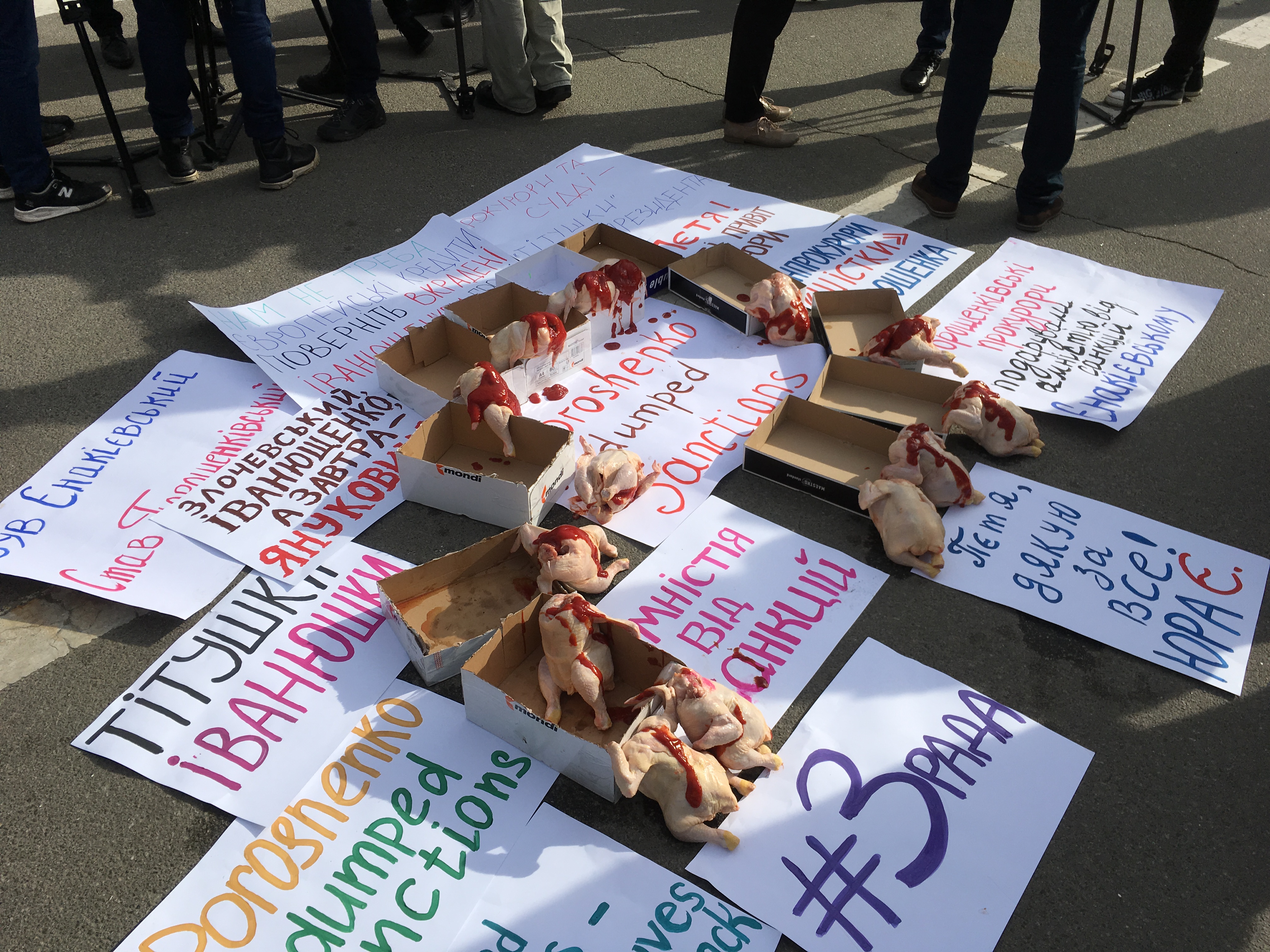 Today civil activists together with Members of Parliament brought bloodstained carcasses to the Presidential administration. Thus, they thanked the “guarantor” for the fact that three Prosecutors General appointed by Poroshenko wimped out the criminal proceedings against Yanukovych’s ally Yuriy Ivanyuschenko, who was the main “supplier” of “titushki” on the Maidan.

On the 3rd of March 2017, European Union lifted sanctions from Ivanyuschenko. The initiators of the street action believe that the main blame for the lifting of sanctions is wimping out the case by the Prosecutor General’s of Ukraine. Price of lifted sanctions calculated by activists in current exchange rate of NBU – almost UAH 5.4 billion.“Prosecutor General’s Office started a proceeding on Ivanyuschenko only after we started writing statements of crime and forced them to investigate economic crimes of Yura Yenakievskyi.

That was exactly the thing needed for saving sanctions – to show Europeans suspicions of corruption crimes ” – Daria Kaleniuk from Anti-corruption Action Centre explains the reason of lifting sanctions. According to her, the inaction of the deputy of Yuriy Lutsenko – Stolyarchuk, who led this case under other Prosecutors General has led to the closure of the case and the reasons for the continuation of sanctions have disappeared. The Head of Special Investigations Department Yuri Gorbatyuk, in the framework of criminal proceeding on Ivanyuschenko a year ago reported about the arrest of 1.8 million Swiss francs, $30 million in Latvia, $ 575 thousands in Monaco.

According to AntAC, police in Switzerland and Monaco arrested considerably more in total – around $ 200 million on the accounts of companies of Ivanyuschenko.After the lifting of sanctions the possibility of returning these funds to the budget of Ukraine is lost forever, according to activists.

“Three years ago, we understood that law enforcers will not be doing anything for saving sanctions. Three years while the investigation was pending they were doing this – they did not investigate anything. This inaction was managed by Stolyarchuk, unaltered Deputy of Shokin and Lutsenko. During the year under his leadership in Ivanyushchenko’s case only one procedural act was carried out – the questioning of a lawyer of AntAC, who prepared a statement of crime. This was the reason for Ivanyuschenko’s lawyers to go to the court and they won it – the court made the PGO to close the case.”, – adds Kaleniuk.Let us recall that recently Supreme Court of Ukraine has closed all the cases against Yura Yenakiyevskyi – not because of the of lack of evidence, but because of the lack of any investigative action within a specified period.

“Today all the responsibility for closing the case is shifted to the Supreme Court which will be completely re-elected in the next few months – explaines Ehor Sobolev, the Head of the Parliamentary Committee for the Prevention of Corruption – In fact, for three years the Prosecutor General’s Office did not do anything apart from hampering the investigation of the case, the suspicion on which should have been raised to Ivanyuscheko during 2016.

However, during the cadence of each of three of Prosecutors General, appointed by Poroshenko this was not done and now one of the closest allies of Yanukovych will be spending money stolen from Ukrainians on elite resorts instead of sitting behind bars”.

It should be noted that in the case of death of the activists of the Maidan, which is investigated by the Prosecutor General’s Office for more than three years, only one “titushka” was convicted. In April 2014 the Ministry of Internal Affairs stated that the Member of Parliament Yurii Ivanyuschenko (Party of Regions) is involved in the formation and funding of organized groups of young people of athletic appearance or so-called “titushki” who kidnapped, beat and killed activists of Euromaidan.

“Closing the case against Ivanyuschenko leaves no doubt that “killing” of criminal proceedings against Yanukovych clan is planned, systemic policy of the third Prosecutor General of Poroshenko in a row. Poroshenko is worse than Yuschchenko and Yanukovych altogether because this time the blood of peaceful protesters was on the hands of bandits who were not put in jail. I don’t have any doubt that part of the money which were lifted from sanctions settled in the pockets of those who helped Ivanyuschenko to become clear on the law”. – explains the activist of Automaidan Oleksii Hrytsenko.

Numerous failures of Prosecutor General’s Office confirm the necessity of a serious reform of this institution, activists urge and require from the President to punish those responsible for the lifting of European sanctions.

“Statements regarding the abuse of authority by the Prosecutor General’s Office of Ukraine and aid to the alleged perpetrator in preserving of stolen assets demonstrates the fact that the work of cleaning of the prosecution is failed now. The Prosecutor General’s Office of Ukraine should be finally cleaned of people who played along with Ivanyuschenko by their inaction and carry out transparent competition for managerial positions in PGO.”, – explains Andrii Sliusar, lawyer of Transparency International Ukraine.

Ivanyuschenko (Yura Yenakiyevskyi) one of the most influential persons from the entourage of V. Yanukovych, crime lord, “beholder” of Yanukovych over financial flows in Ukraine.

Anti-Corruption Action Centre believes that Ivanyuschenko is involved in the embezzlement of budget funds received from the sale of Ukrainian quotas on greenhouse gas emissions under the Kyoto Protocol to Japan, bankruptcy of SE “Anthracite” and so on.