The Main Investigative Department of the Security Service of Ukraine (SBU) is conducting the pre-trial investigation regarding actions of the head of the SAPO Nazar Kholodnytskyi on the ground of criminal offenses – incitement of the witness to provide false testimony and disclosure of information regarding the investigation.

This became known from the Prosecutor General’s Office (PGO) response, which the Anti-Corruption Action Center received on its request.

From April 2017, the PGO has been conducting the pre-trial investigation regarding actions of the head of the SAPO concerning four episodes. Later, in June 2018, the PGO has allocated the case regarding two of them into the separate proceeding and forwarded it to the SBU. The investigation is ongoing. 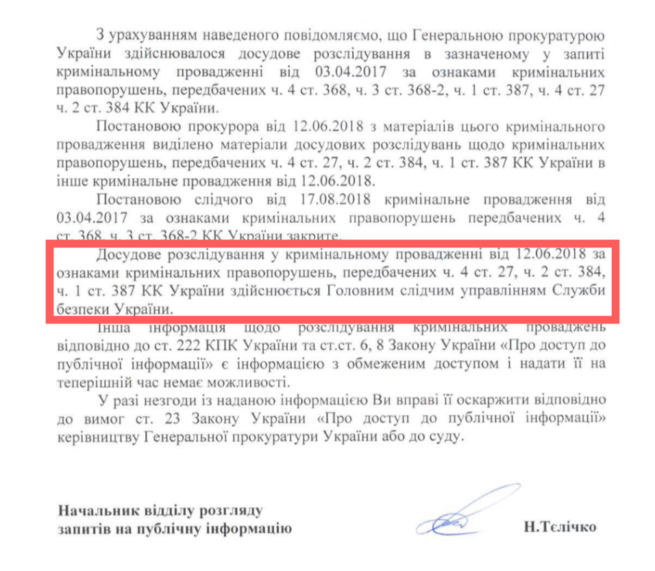 At the same time, neither the Prosecutor General’s Office, nor the SBU  include into qualification of crime actions of Kholodnytskyi concerning interference into the work of the court which is classified under Part 2 Article 376 of the Criminal Code.

This episode also regards the so-called case of the “apartment bribe” to the Acting Minister of Health Suprun, in which Kholodnytskyi acted in co-operation with his deputy Kryvenko.

This is about documented Kholodnytskyi’s indignation that prosecutors, without his consent, satisfied the appeal of the NABU detectives regarding searches. As a result, Kholodnytskyi demanded prosecutors to influence the court so that the latter would not consider the appeal, which eventually happened – prosecutors called to the deputy head of the court with relevant requirements.

“Despite the evidence collected by NABU against Kholodnytskyi, the Prosecutor General deliberately forwarded the case to the SBU in attempt to shift public responsibility regarding the investigation,” commented the lawyer of the Anti-Corruption Action Center Andriy Savin. Nevertheless, according to the Law, signing of the suspicion to Kholodnytskyi is exclusively in the jurisdiction of the Prosecutor General. Moreover, the procedural guidance in this case remains in the jurisdiction of the PGO”.

“Today, the notice of suspicion signed by the Prosecutor General is the only opportunity to suspend Kholodnytskyi from office with the help of the court, and every day of delay causes irreparable damage to the NABU’s cases”, adds the lawyer.

The PGO closed the criminal proceeding in August 2018 regarding two other offences.

This is about Part 4 Article 368 and Part 3 Article 368-2 of the Criminal Code of Ukraine – acceptance of an offer, promise or receipt of an unlawful benefit by official (in other words, a bribe) and illicit enrichment.

We should recall that the NABU received permission to wiretap the cabinet of the head of the SAPO Nazar Kholodnytskyi regarding this proceeding.

Installed wiretapping device in Kholodnytskyi’s aquarium has allowed to record conversations that indicate gross violations of current legislation, unethical behavior and, in fact, they confirm “dumping” of many criminal proceedings.

It became known from the published records of Kholodnytskyi’s conversations that the head of the SAPO advised to his friend – a witness in the case, how to behave during questionings and how to testify, informed subjects of cases about the course of investigations, and also provided illegal instructions to prosecutors and violated the code of ethics regarding communication with subordinates.