Boryspil police office opened criminal proceeding under Article 171 of the Criminal Code of Ukraine, namely for “obstruction of lawful professional activities of a journalist” by the Anti-corruption Action Centre member of the board Oleksandra Ustinova and her partner. This fact became known when they were summoned for interrogation.

It was complaint from the bully-blogger, Vsevolod Filimonenko, that became grounds for opening the proceeding. He claimed that his professional activity of a journalist had allegedly been obstructed when he went to meet Ustinova and her partner at Boryspil airport in May of 2017.

The Anti-corruption Action Centre consider this prosecution as putting pressure on Oleksandra Ustinova before the court hearing, as herself, as well as her partner will shortly be interrogated in court for the case of Vitaliy Shabunin, the AntAC head of the board.

“It was incident at the airport and shameful conduct by bully Filimonenko that lead to the argument between him and Vitaliy. Oleksandra was the one truly affected by the airport incident, and yet the police ignore her complaints with remarkable stubbornness. Instead, opening of this criminal proceeding for alleged obstruction of a journalist’s activity is putting pressure and just another attempt of the bully to pose as a victim”, says Olena Shcherban, the AntAC lawyer.

For reference, on May 7, 2017 at 06.30 am Oleksandra Ustinova, the AntAC member of the board, who was coming back from her vacation, was ambushed at the airport by Filimonenko and two more men. On the video, published by Filimonenko himself, those people could be clearly seen surrounding the couple, bullying them, making fun, asking questions to which the attackers themselves gave answers, reducing the civil activist to tears. In a few days bullies even came to the house where the AntAC Board Member Ustinova resides, their goal remained unknown.

The activists are still at a loss as to how Filimonenko got access to the information on the exact time of Ustinova’s flight arrival, as this information is confidential and can be obtained only from the airline operator, thus giving the AntAC reason to suspect that the Security Service of Ukraine orchestrated the bullying, as the Service had previously been implicated in organizing protest rallies in front of Shabunin’s house.

It is noteworthy that Ustinova and her partner filed a complaint to the police about them being assaulted by a group of men. However, no investigative actions have been conducted in 11 months.

For reference, on June 8, 2017, next to Dniprovskyi district military registration and enlistment office of Kyiv city there was a conflict between Vitaliy Shabunin, the AntAC head of the board, and Vsevolod Filimonenko.

The published video shows that Filimonenko provoked Shabunin and the latter punched him in the face. At first, Vitaliy asked Filimonenko if he was the person that insulted his mother-in-law and reduced to tears his colleague Ustinova. Filimonenko gave the affirmative answer; Vitaliy then punched him and went inside the conscription office. Shortly the bully, seemingly safe and sound, and unharmed, ran up to Shabunin and pepper-sprayed him and other journalists in the face.

Filimonenko works as assistant to the Radical Party MP Serhii Melnychuk; he calls himself a journalist, although he is better known for his provocation videos, and not his journalist endeavours.

Shabunin is accused under Article 345-1 “Threat or assault on a journalist” of the Criminal Code of Ukraine. He may face up to 5 years of prison sentence.

Moreover, the lawyers say that forensic expertise against Shabunin was falsified and cannot be used as evidence in the case of “assault on a journalist”. The forensic medical expert is known to have produced dubious conclusions on several occasions. 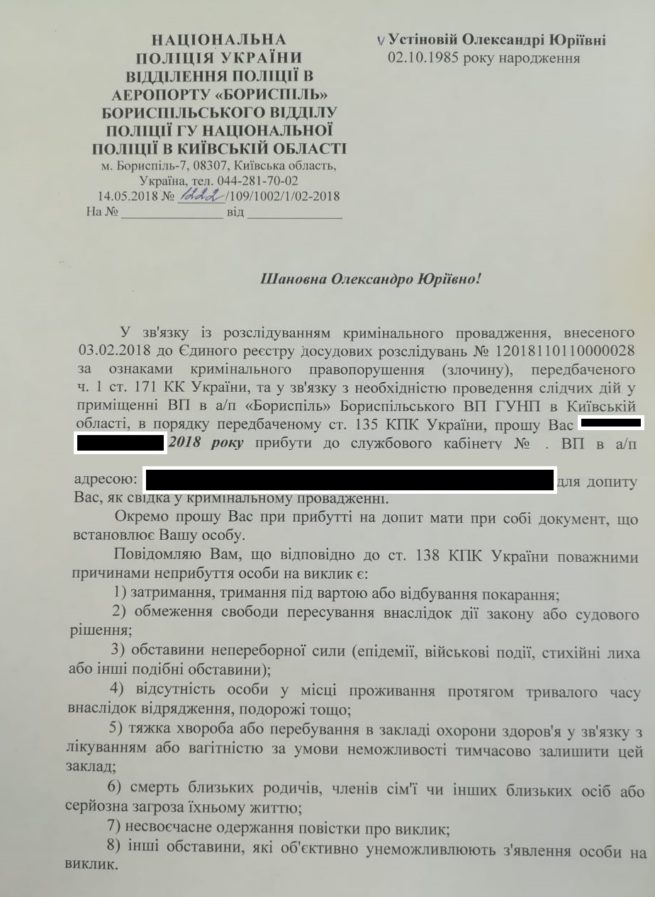 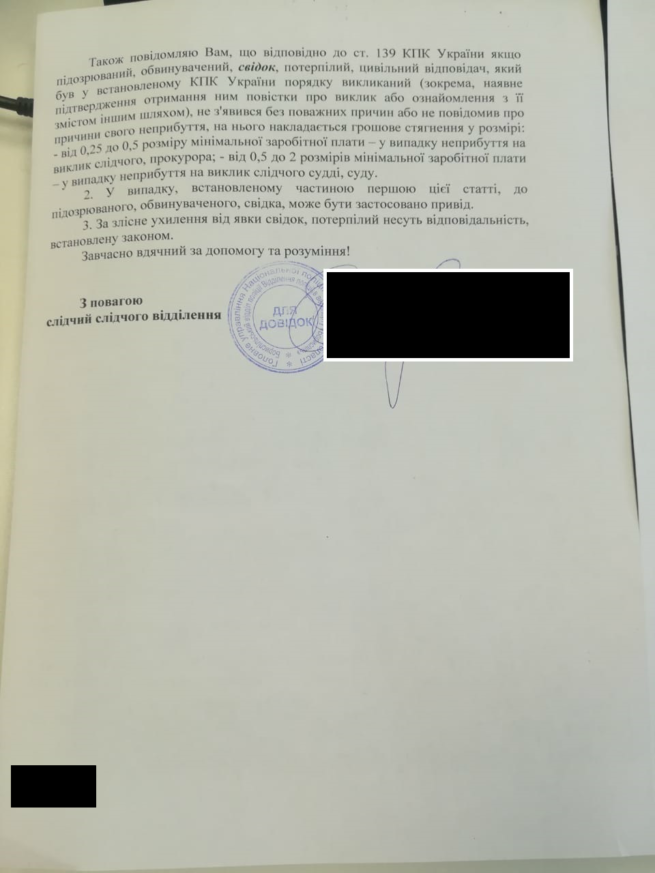 I ask you to have your ID at the interrogation.

I inform you that valid reasons for non-compliance with summons are as follows:

1) apprehension, custody, or service of punishment;

2) restriction of the freedom of movement under law or based on court’s decision;

4) absence of the summoned person in the place of residence during prolonged time due to official mission, travel, etc.;

5) serious disease or sojourn in a medical establishment in connection with treatment or pregnancy, on condition of impossibility to temporarily leave the establishment;

6) death of close relatives, family members, or any other close persons, or a serious threat to their life;

7) untimely receipt of the summons;

8) other circumstances objectively preventing appearance of a person on summons.

I am grateful to you in advance for your assistance and understanding!

Your sincerely,
Investigator of the Investigation Department