Home Новини DOCUMENT: Kholodnytskyi’s family received half a hectare of land near Kyiv for free

DOCUMENT: Kholodnytskyi’s family received half a hectare of land near Kyiv for free 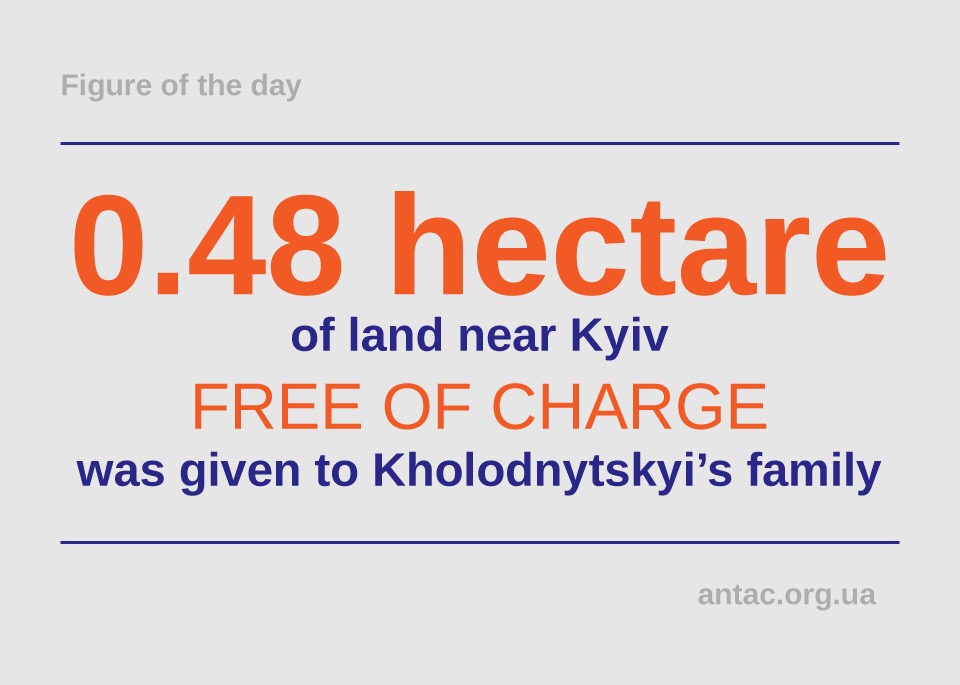 Anticorruption Prosecutor Nazar Kholodnytskyi and hisfamily received 5 plots of land – 0.48 ha in total – forfree. Four of them are situated on the territory of Kyievo–Sviatoshynskyi raion, where Kholodnytskyi hadpreviously worked as a prosecutor.

All these plots of land were given to Nazar Kholodnytskyi, as well as tohis mother and sister for free privatization in 2012-2015. The plots ofland were chosen in some of the most expensive suburban locations near Kyiv, namely in the villages of Bilohorodka, Khodosivka, Kolonshchyna and Mykhailivka-Rubezhivka.

“Repeated allotment of land near Kyiv free of charge to the raion’sprosecutor and his family, that don’t even reside in Ukraine, certainly does seem strange,  — says Vitalii Tsokur, the Anti-corruption Action Centre legal expert.  — Especially considering thefact that the land in those locations is worth over a thousand dollarsper one tenth of a hectare and is not usually given to averagecitizens free of charge”, — he adds.

In 2012, Nazar Kholodnytskyi received and privatized 2 plots of land inthe village of Bilohorodka of Kyievo–Sviatoshynskyi raion, total area of0.1 and 0.12 ha.

A year later, in October of 2013, Kholodnytskyi’s sister Hanna, who hasbeen living in Italy for 20 years, received and privatized 2 more plots ofland on the territory of Kyievo–Sviatoshynskyi raion: in the village of Mykhailivka-Rubezhivka (0.15 ha) and the village of Khodosivka(0.11 ha).

In 2016, the sister also inherited the plot of land for gardening (0.1 ha) previously privatized by Kholodnytsky’s mother in Makariv raion of Kyiv oblast.

In total, Nazar Kholodnytskyi and his family own 12 real estate properties, 8 of which are located on the territory of Kyievo-Sviatoshynskyi raion.

These include the Anticorruption prosecutor’s personal flat in the city of Vyshneve from “Akvareli” developing company. It is the owner of the “Akvareli” company and Vyshneve’s mayor Illia Dikov, that NazarKholodnytskyi had previously worked with, who feature in the criminal investigation concerning a bribe offered to the Acting Minister of Healthcare Ulana Suprun.

Also, mother and sister of the incumbent head of the Specialized Anticorruption Prosecutor’s Office, when he was prosecutor in Kyievo-Sviatoshynskyi raion in 2013-2014, bought 2 flats in the same raion, in the village of Sofiivska Borshchahivka, both of them from the same developer – “MID SERVIS” LLC, of 183 sq.m and 125 sq.m.

Moreover, in 2017, Kholodnytskyi’s sister became owner of a 63 sq.m. flat in the village of Kriukivshchyna. The flat was acquired under theshare agreement, which was made as early as 2013 from the developer of the residential complex “Pidkova”.

The family also owns 2 flats and a house in Lviv.